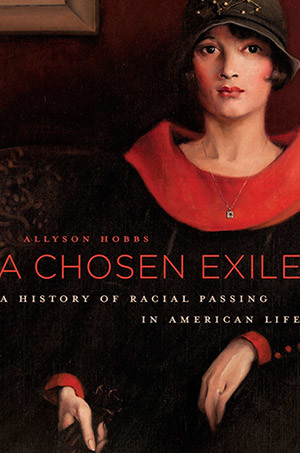 From The New York Times: “ ‘A Chosen Exile,’ by Allyson Hobbs” by Danzy Senna

One of the best birthday presents anybody ever gave me was a “calling card” by the conceptual artist Adrian Piper. I was in college at the time, and it felt like the ultimate inside joke handed from one racially ambiguous person to another.

Slim and innocuous as a business card, it reads: “Dear Friend, I am black. I am sure you did not realize this when you made/laughed at/agreed with that racist remark. In the past I have attempted to alert people to my identity in advance… . I regret any discomfort my presence is causing you, just as I’m sure you regret the discomfort your racism is causing me.”

To be black but to be perceived as white is to find yourself, at times, in a racial no man’s land. It is to feel like an embodiment of W. E. B. Du Bois’s double consciousness — that sense of being in two places at the same time. It is also to be perpetually aware of both the primacy of race and the “bankruptcy of the race idea,” as Allyson Hobbs, an assistant professor of history at Stanford University, puts it in her incisive new cultural history, “A Chosen Exile.”

Hobbs is interested in the stories of individuals who chose to cross the color line — black to white — from the late 1800s up through the 1950s. It’s a story we’ve of course read and seen before in fictional accounts — numerous novels and films that have generally portrayed mixed-race characters in the sorriest of terms. Like gay characters, mulattoes always pay for their existence dearly in the end. Joe Christmas, the tormented drifter in William Faulkner’s “Light in August,” considers his blackness evidence of original sin (a.k.a. miscegenation) and ends up castrated and murdered. Sarah Jane, a character in Douglas Sirk’s 1959 remake of the film “Imitation of Life,” denies her black mother in her attempt to be seen as white. Her tragedy once again feels like mixed fate. As her long-suffering mother puts it, “How do you tell a child that she was born to be hurt?”

To her credit, Hobbs isn’t interested in reviving this tragic mulatto archetype. For her, rather, passing is an opportunity to consider deeper questions. She takes nothing at face value — least of all the idea that the person who is passing is actually and truly of one race or the other. As she puts it, there is “no essentialized, immutable or true ‘identity’ … ever waiting to be found just below the surface.”

One of the difficulties in writing a history of passing is that it’s a phenomenon, Hobbs acknowledges, “intended to be clandestine and hidden, to leave no trace.” Which is why, in part, passing has remained the territory of fiction and literary criticism.

When historians have taken on the subject, Hobbs points out, they have generally “paid far more attention to what was gained by passing as white than to what was lost by rejecting a black racial identity.” Hobbs, on the other hand, insists on seeing the history of passing as “a coherent and enduring narrative of loss.” We hear from the black family left behind. We read about the individuals who “looked white” but consciously chose not to pass — who, when given the choice, opted for black life and community.

Sometimes the passing Hobbs depicts is shown to be simply a practical choice — what she calls “tactical or strategic passing.” In 19th-century America people passed as free first, white second. Ellen Craft, a slave in Macon, Ga., successfully escaped to freedom in 1848 dressed as a white man, accompanied by her accomplice, her darker-skinned husband, who pretended to be her servant. Later, post-Reconstruction, people passed as white in order to go to work at better paying jobs, returning home to the black community at night in what Hobbs refers to as “9-to-5 passing.”

She also tells us about those who “went white” in more permanent ways, like Elsie Roxborough, an upper-class socialite who briefly dated Langston Hughes. Elsie changed her name to Mona Manet and wrote Hughes a letter bearing no return address stating that she “intended to cease being colored.” When she committed suicide years later, only her white-appearing relatives showed up to claim her body, “allowing Elsie to remain white, even in death.”

But for every Elsie there is a Robert Harlan, light-skinned, straight-haired, who showed no interest in renouncing his blackness. Born a slave to his black mother and a white father, probably the master, James Harlan, he was raised in the same household as the white Harlan boys. His probable father made him a free man and he went on to make a fortune in the gold rush in California. He remained close to the other Harlans, one of whom was Justice John Marshall Harlan — the “great dissenter” of the Supreme Court — who argued on behalf of equal rights under the law in Plessy v. Ferguson.

One of the most interesting figures in the book is the novelist and poet Jean Toomer. Author of the 1923 modernist classic “Cane,” Toomer came from an illustrious, high-powered racially mixed family. After the publication of “Cane,” which celebrated Southern, rural black life, Toomer became “reticent, even hostile to the notion that he was Negro, ‘body and soul.’ ”

Though scholars have widely argued that Toomer passed as white, Hobbs depicts him as not so much rejecting blackness as rejecting racialized thinking. He saw race as superficial, a “physical covering,” and argued for an American identity that “could not extricate its black elements from its white components.” In this critically vigilant work, Hobbs refuses to accept any one identity as “true.” Toomer, in his resistance to being pigeonholed, comes across here as not so much self-loathing as ahead of his time.

When there is tragedy in these pages, Hobbs locates its source not in the racially ambiguous figure himself or herself, but in the reductive culture into which he or she is born. Toomer argued eloquently for hybridity, but “his idea never gained traction.”

Toomer failed to write anything of lasting impact after “Cane.” Indeed, Hobbs argues, in the postwar years, to pass as white was in many ways to choose mediocrity — to sell “one’s birthright for a mess of pottage,” as James Weldon Johnson put it at the end of “The Autobiography of an Ex-Colored Man.”

Hobbs tells the curious story of the ­upper-class black couple Albert and Thyra Johnston. Married to Thyra in 1924, Albert graduated from medical school but couldn’t get a job as a black doctor, and passed as white in order to gain entry to a reputable hospital. His ruse worked and he and his wife became pillars of an all-white New Hampshire community. For 20 years, he was the town doctor and she was the center of the town’s social world. Their stately home served as the community hub, and there they raised their four children, who believed they were white. Then one day, when their eldest son made an off-the-cuff comment about a black student at his boarding school, Albert blurted out, “Well, you’re colored.” It was almost as if Albert had grown weary after 20 years of carefully guarding their secret. And with that Albert and Thyra began the journey toward blackness again. It is fair to wonder if each of Hobbs’s subjects — from Elsie Roxborough to Jean Toomer to Albert and Thyra Johnston — would have had an easier time had they been born today, in the era of Barack Obama and Tiger Woods. Certainly there is increasingly a language for mixed identity. And yet, as Hobbs reminds us, hybrid identities are still racial identities, and “as our present moment unfolds, we are often left to wonder if we have seen this movie before.”