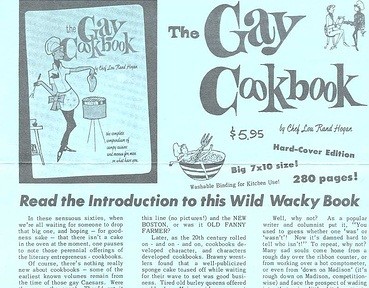 The Gay Cookbook was featured on the Room 26 Cabinet of Curiosities on March 20, 2008: What’s for dinner, Mary?

About his research, Vider writes: “I wrote the very first draft of the article for a graduate research seminar on 20th Century U.S. History, during my second year in the Am Civ program at Harvard. A friend was the first person to tell me about the cookbook – he had purchased a copy at a used bookstore in New York. But I came across [the Room 26 blog post] while I was researching the cookbook for the course, and the post was a major inspiration to me in thinking about the ways the book circulated within emerging gay consumer culture – and how it was used (especially that ‘washable binding for kitchen use’ line).”

Stephen Vider was recently awarded the Crompton-Noll Award from the GL/Q Caucus of the Modern Language Association, for best essay in lesbian, gay, and queer studies.

“’Oh Hell, May, Why Don’t You People Have a Cookbook?’: Camp Humor and Gay Domesticity” Abstract: Domesticity has been underexamined in historical accounts of gay male culture in the United States. This essay analyzes The Gay Cookbook, by Chef Lou Rand Hogan, in order to reconsider the role of domestic space in shaping gay male identity, community, and politics in the post–World War II period. Published in 1965 and promoted in mainstream and gay media, Hogan’s cookbook presented a style of camp humor that challenged popular representations of gay life as lonely and “seedy,” as well as early gay rights activists’ emphasis on gender-normative self-presentation. The cookbook was also emblematic of an expanding gay print and consumer culture, which increasingly located the home as a site of consumption and social and sexual connection. The Gay Cookbook, I argue, reveals how domesticity blurred divides between “public” and “private” gay life, and provided a space to negotiate Cold War class, race, sexual, and gender conventions.

Read the full text: “’Oh Hell, May, Why Don’t You People Have a Cookbook?’: Camp Humor and Gay Domesticity”