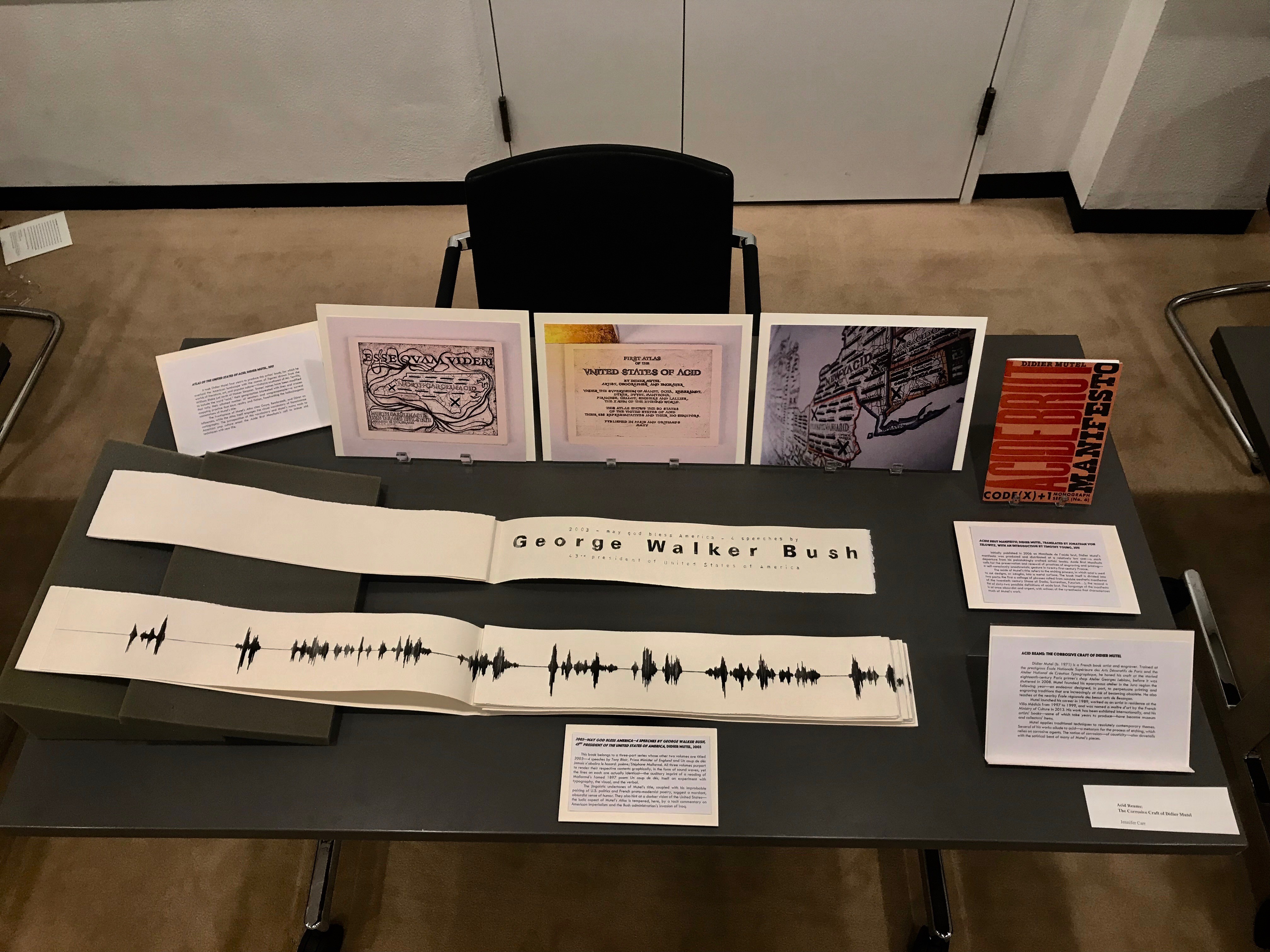 Didier Mutel (b. 1971) is a French book artist and engraver. Trained at the prestigious École nationale supérieure des Arts Décoratifs and the Atelier national de création typographique, he apprenticed at the storied eighteenth-century Paris printer’s shop Atelier Georges Leblanc, before it was shuttered in 2008. Mutel founded his own, eponymous atelier in the Jura region the following year—an endeavor designed to perpetuate printing and engraving traditions that are increasingly at risk of becoming obsolete. He also teaches at the nearby École régionale des beaux-arts de Besançon.

Mutel launched his career in 1989, worked as an artist in residence at the Villa Médicis from 1997 to 1999, and was named a maître d’art by the French Ministry of Culture in 2013. His work has been exhibited internationally, and his artists’ books—some of which take years to produce—have become museum and collector’s items.

Mutel applies traditional techniques to resolutely contemporary themes. Several of his works allude to acid—a metonym for the process of etching, which relies on corrosive agents. The notion of corrosion—of causticity—also dovetails with the satirical bent of several of Mutel’s pieces.

Acide Brut Manifesto, Didier Mutel, translated from the French by Jonathan von Zelowitz, with an introduction by Timothy Young, 2011

Initially published in 2006 as Manifeste de l’acide brut, Didier Mutel’s manifesto was produced and distributed at a relatively low cost—a stark departure from his painstakingly crafted artists’ books. Acide Brut Manifesto calls for the preservation and renewal of practices of engraving and printing—a self-consciously anachronistic gesture in twenty-first-century France.

The acide of Mutel’s title refers to the etching process, in which acid is used to cut designs, or intaglio, into a metal surface. The book itself is divided into two parts: the first a collage of phrases culled from notable aesthetic manifestos of the twentieth century (those of Dada, Surrealism, Futurism…); the second a list of sixty-two possible definitions of acide brut. The language of the manifesto is at once absurdist and urgent, with echoes of the synesthesia that characterizes much of Mutel’s work.

Atlas of the United States of Acid, Didier Mutel, 2017

It took Didier Mutel four years to produce this artist’s book, for which he overlaid a map of the United States with the names of figures drawn from the worlds of literature, art, and popular culture—Voltaire southwest of Mr. Terrific, William Blake just north of Homer Simpson. States’ names have been modified to include the word “acid,” their geographies blanketed with lines and crosses that tally their allotted number of senators and congresspeople—a surreal mapping practice that blurs reality and fiction, forefronting the hallucinogenic connotations of Mutel’s title.

The title page of Mutel’s Atlas cites Goya, Rembrandt, and Dürer as influences, while the Atlas itself engages the visual vocabulary of Renaissance cartography. The juxtaposition of this vocabulary and Mutel’s many nods to American popular culture enacts the Acide Brut Manifesto’s call to imbue old techniques with new life.

This artist’s book belongs to a three-part series whose other two volumes are entitled 2003—4 speeches by Tony Blair, Prime Minister of England and Un coup de dés jamais n’abolira le hasard: poème/Stéphane Mallarmé. All three volumes purport to render their respective contents graphically, in the form of sound waves, yet the lines on each are actually identical—the auditory imprint of a reading of Mallarmé’s famed 1897 poem Un coup de dés, itself an experiment with typography, the visual, and the verbal.

The jingoistic tinge of Mutel’s title, coupled with his improbable pairing of U.S. politics and French proto-modernist poetry, attest to the artist’s mordant, absurdist sense of humor. They also hint at a darker vision of the United States—the ludic aspect of Mutel’s Atlas is tempered, here, by a tacit commentary on American imperialism and the Bush administration’s invasion of Iraq.

Jennifer Carr very recently completed her PhD in French at Yale. Her research interests include contemporary French and Francophone fiction, feminist theory, experimental writing practices, the history of Franco-American cultural exchanges, and the intersection of literature and the visual arts.