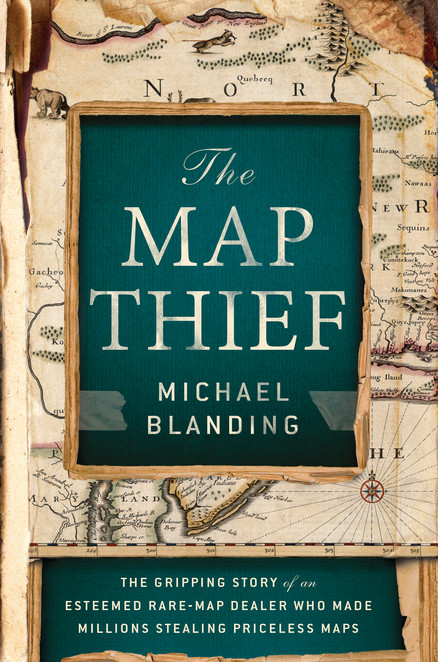 ‘The Map Thief’ by Michael Blanding, reviewed in The Boston Globe, June 7 2014, by Michael Washburn

It was easy. After spending decades working alongside librarians at such institutions as Harvard, the Boston Public Library, and Yale, Smiley needed only to request a folder of rare maps or an atlas. His heists were subtle — a moment unobserved and the near silence of a blade through paper. Smiley removed the map, folded it to the size of a credit card, and then walked out the door with hundreds of years of history in his tweed pocket.

Simple and effective, Smiley filched more than $3 million worth of maps during his spree.

“The Map Thief: The Gripping Story of an Esteemed Rare-Map Dealer Who Made Millions Stealing Priceless Maps” is journalist Michael Blanding’s chronicle of Smiley’s transformation from legitimate hustler to opportunistic crook. “The Map Thief” presents as true crime, and it is, but Blanding goes far beyond Smiley’s misdeeds.

The book offers a brisk, engaging introduction to the slippery world of rare maps and map stewardship. The book also delivers glimpses into the history of American political and ideological formation — Colonial-era maps, which Smiley specialized in, were as much as anything projections of imperial optimism and aggression, and the “The Map Thief” abounds with mini-histories told through specific maps.

Smiley, a “gregarious, jolly, larger-than-life,” self-taught expert on the maps of early America, spent decades building his career and reputation. As Blanding writes, “The map community is a small one, with maybe a few dozen serious dealers in the United States and fewer than a hundred worldwide.”

By the late 1980s Smiley, a New Hampshire native and Hampshire College graduate, was a well-known presence in that handshake world. His reputation wasn’t sterling — Smiley often overextended himself, bouncing checks for acquisitions — but he was a legitimate dealer to several important collectors.

Serious money troubles beset Smiley in the 1990s when map dealing became more competitive (rare things hanging on living room walls bestow prestige, but there’s only so much art to go around).

Smiley was also financially hobbled by his pet project. He’d invested tremendous capital in a single-handed attempt to resurrect a small, central Maine town called Sebec, buying and operating a post office as well as shops and restaurants. As Smiley struggled in business, he had to maintain payroll and operating fees for a town, as well as fending off legal challenges to his plans for Sebec.

After his 2005 arrest Smiley admitted to stealing 97 maps, but the true number will likely never be known. The libraries Smiley stole from claim that nearly 250 maps are missing. After helping the FBI recover some of them, Smiley served three years in prison. Today he’s working as a landscaper and deeply in debt.

“The Map Thief” adopts the structure of a crime book, but the book doesn’t push you toward the edge of your seat. The most gripping episode in the book comes early, with Smiley’s final, failed attempt to steal from Yale’s Beinecke Library. An attentive librarian noticed a razor blade on the floor, arousing her suspicion.

Library crimes aren’t cinematic, but what “The Map Thief” lacks in suspense it more than makes up for with the details of the strange world of tweed-collar crime. As difficult as it is to catch a map thief, it’s even more difficult to imprison him.

“The difficulty in prosecuting map theft,” Blanding writes, “is that it is so hard to prove provenance. It’s not like dealing with art theft, where each item is a one-of-a-kind work… . No one can know with certainty how many copies of a particular map have survived over the centuries.”

If a collector suspects that a map is hot, that wouldn’t necessarily kill a deal. As Blanding observes, “It’s not just the crooked dealers — map collectors, too, are at fault for buying maps at prices too good to be true, knowing the property is stolen.”

But the most striking aspect of “The Map Thief” is less the thief — “Why did I steal?” Smiley tells Blanding, “I stole for the money.” — than the revelations about the lax security at some of our most august institutions.

Smiley was given free rein with rare materials, and most of the libraries he dealt with hadn’t, and haven’t, comprehensively cataloged their map holdings. These libraries couldn’t know what they were missing. And libraries often refuse to admit they’ve been robbed. It’s a slap in the face to their trustees and the public that such rarities are overseen so loosely — better to let something vanish than draw attention to an institution’s failure.

Blanding had limited access to Smiley: After a couple of interviews, Smiley got cold feet and severed contact. No matter, though, as Blanding’s portrait of Smiley retains vitality. Sure he was a thief and a bit of an egomaniac, but Smiley was also exceedingly generous with his friends and the people who worked in his shops. You don’t like Smiley, but he’s vivid and somewhat sympathetic. Blanding doesn’t quite reach the same amplitude when dealing with other players in the story, particularly many of the library administrators, who come across as aloof and self-preserving.

Old maps are beautiful relics — relics of ignorance, ambition, and ingenuity — and their attraction resides in their charming inaccuracy, their once-plausible, now laughable suppositions. Maps project wishful thinking. “The Map Thief” is a masterful cartography of a man who fell victim to such wishful thinking, destroying his life. As a rival dealer said about Smiley, “You’re talking about a person who defiled the institutions that defined his existence.”

Michael Washburn is the interim director of public programs at the Graduate Center, City University of New York. He can be reached at michael.a.washburn@gmail.com.