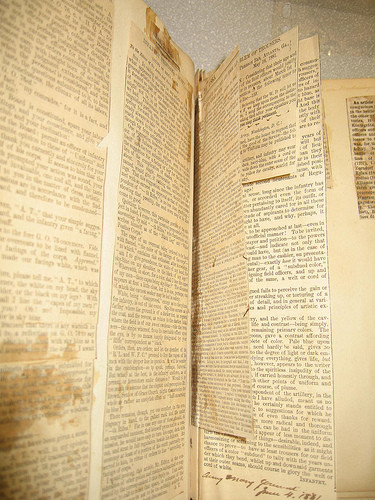 The Beinecke Library has acquired a scrapbook and papers of Albert Tracy documenting his activities as a poet and artist from 1843-1892. Albert Tracy (1818-1893) joined the United States Army as a lieutenant in the 9th Infantry during the Mexican War, and served as Adjutant General of Maine, 1852-1855. He returned to the Army to serve in the 10th Infantry, in which he participated in an expedition against the Sioux from Fort Snelling, Minnesota, in the Utah Expedition, and in the American Civil War, when he attained the rank of colonel and served as aide-de-camp to John C. Frémont.
The scrapbook includes clippings of his poems published in newspapers, a letter from Wendell Phillips related to the publication of a poem, and Tracy’s published accounts of the Mexican War and his critiques of the post-Civil War United States Army. The papers include several manuscript poems and additional newspaper clippings, as well as pencil drawings that depict a panorama of Fort Bridger in the Utah Territory and a view of the fort interior, June 3-4, 1858.
Associated material: Albert Tracy papers, 1843-1893, New York Public Library, New York, New York
Images: Tracy scrapbook pages; manuscript of “The Battle of Lundy Lane” (1892); Tracy scrapbook pages including Wendell Phillips correspondence; drawing of Fort Bridger, Utah Territory, June 3-4, 1858 (click on any image for a larger view).
Collection description prepared by Matthew Mason, Archivist, Beinecke Library.