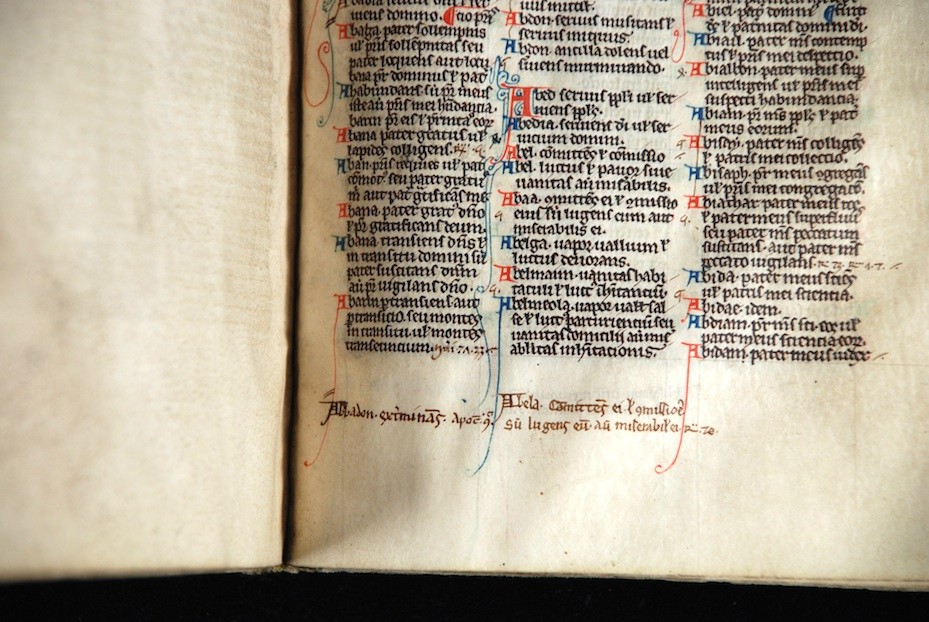 An English pocket Bible in Latin arrived this past fall in the Beinecke’s collections.  The Bible shows many signs of use, including numerous marginal notes and it contains a separate book to aid the reader, the Interpretation of Hebrew Names, a detail of which is shown here. Given its portability and scholarly use, it was likely owned by a Dominican or Franciscan preacher, but only further research with answer such questions.  This book has been in private hands and not available for academic study until now.

PROVENANCE:
This Bible appears to have been produced in England and was probably owned by a Franciscan or Dominican in the 13th century: marginal notes mention the book of Brother Richard of London (p.186) and record that Brother Robert Vache read (on p.386) of a quadruped, a small goat called a ‘stanbukke’ in English. The volume was clearly used for extensive and detailed study, and displays many of the study aids introduced in the 13th century: pagination appears at the top of the page, the columns of each book of the bible are numbered in the lower margin, and the columns themselves are divided into sections using letters of the alphabet and Arabic numerals at intervals of about 5-7 lines between the columns (similar to the Oxford practice of numbering). In the late 13th or early 14th century the Prayer of Manasseh was added in an elegant charter hand on a page left blank before Tobias (p.344); Tra[m]ays, 15th century, notarial sign and inscription on the first flyleaf; Edward Turner, 16th century, with ownership inscription (above Anateb in Hebrew Names); William Collins, his long inscription on the second flyleaf dated 1614; Sotheby’s, 10 July 1968, lot 273.

CONTENT:
Bible with the Prologues attributed to St Jerome, pp.1-823, lacking most of the prologue to the whole Bible but including the Prologue to the Pentateuch, lacking Numbers XXXIV:26 to Deuteronomy I:35, Deuteronomy XXXIII:21 to Joshua II:1, Ruth IV:15 to I Kings I:4, I Kings XXX:3 to II Kings II:3, Proverbs XIX:11 to XXIII:11; Ecclesiasticus X:16 to XIV:3, Jeremiah XLIX:16 to LI:3; Interpretation of Hebrew Names pp.825-896, lacking end (from Uphir).
As with many Bibles, especially those produced in England, the Psalms are omitted, although curiously on the final three Psalms (148:4-150) appear in two parallel versions on p.389 following Job. The page has not been rubricated or decorated, and the medieval pagination is uninterrupted, suggesting that the Psalter was written on quires which were then immediately removed, before rubrication, decoration, or pagination.

A handsome 13th-century English pocket-bible in its original medieval binding; its numerous signs of use by its first owners forming a fascinating example of the kinds of study aid introduced in the 13th century.

As with any recent acquisition, please contact me if you would like to consult the volume before it has received a manuscript number and special arrangements will be made for its viewing.