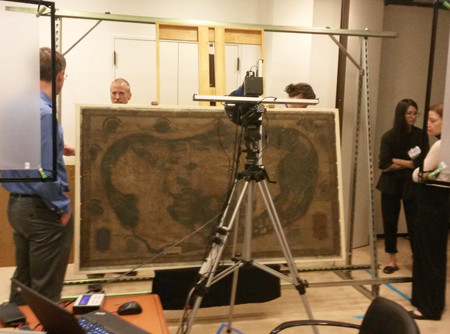 Drawn in about 1491, the Martellus map is considered the best contemporary cartographic representation of Columbus’ conception of the world at the time of his first voyage.

While the map makes for a fascinating wall decoration, five centuries of fading and scuffing have rendered much of its text and other details illegible or invisible.  Work is under way to recover this lost information.

This week, an imaging team has set up shop at the Beinecke to take an array of multispectral images of the map that will reveal details invisible to the naked eye.

The map, which depicts the Earth’s surface from the Atlantic in the west to Japan in the east, is dotted with descriptions in Latin of various regions and peoples. (For example, a text box over northern Asia describes the “Balor” people who live without wine or wheat and subsist on deer meat.) The vast majority of this text is impossible to read. The imaging team seeks to change that.

Multispectral imaging involves capturing multiple images of the map at specific frequencies of light, including ultraviolet and infrared. The images are digitally combined and processed in a way that uncovers information that conventional means of examining manuscripts cannot capture.

The map has been (very carefully) removed from is frame and placed on a large, specialized easel in one of the library’s classrooms. Over the next week, the five-member imaging team will capture 55 overlapping images of the map. Those images will be processed into high-resolution natural light, gray-scale, and false-color images and combined to create a single image of the Martellus map showing text, river systems, and other features not visible on the actual map.

The images will be available in the Beinecke’s digital library.

“The Martellus map is an incredibly strong candidate for this kind of technology,” said Chet Van Duzer, a map historian and the team leader for the project. “You just know it’s going to pop.”

The multispectral imaging could shed light on the history of cartography. For instance, the Martellus map bears striking similarities to Martin Waldseemüller’s world map of 1507 – the first map to apply the name “America” to the New World. In 2012, Van Duzer had infrared and ultraviolet images taken of the Martellus map, which revealed enough of the hidden text to show that the map was an essential source for Waldseemüller’s 1507 map. The information recovered through multispectral imaging will enable further study of Martellus’ influence on Waldseemüller.

The imaging team is operating under the auspices of the non-profit Early Manuscripts Electronic Library. The work is being paid for by a grant from the National Endowment for the Humanities. The Lazarus Project at the University of Mississippi is providing the imaging equipment and much of the expertise.