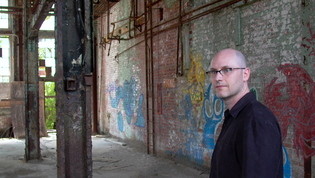 The Poetry Society of America has awarded Yale Lecturer Richard Deming the 2009 Norma Farber First Book Award for his collection of poems Let’s Not Call It Consequence. The book was selected by this year’s judge, poet Martha Ronk. In her award citation, Ronk wrote:
Let’s Not Call It Consequence contains poems of restless thinking as the speaker wrestles with the mysteries of both small matters and great tragedy. They are intelligent, original, and highly crafted and keep one tracking lines that maneuver through specifics of the world (“the cold pear atop the formica table) and the fictionalizing that sustains and deludes: “Say/ it is winter, and through the snow/ a dark figure-a man-crosses/ a bridge between you and there.” Or the repeated use of “let’s” that pulls in the reader, as in Let’s Not Call It Consequence. They are written out of anxiety, insomnia, disappointment; yet the vivid singularity of things works to shift the thinking that always undergirds the poem at hand: autumn leaves, cast-off shoes, stones thrown from the 5th Ave. bridge (“The Logic of Green”).
Deming’s language is so engaging that readers feel literally caught in its permutations and fragility: “it’s difficult, some-/ times to know/ how one/ means.” At the center of this book is the language out of which we try to think (including that of other poets):

Night’s out of joint
and with the incessant
——–din of insomnia, reason’s a dog to kennel.
How to be disinterred from nothing.

If only
——-this thinking thing thought thoughts only
***

A lecturer in the Yale English Department, Richard Deming is a poet and a theorist who works on the philosophy of literature. His poems have appeared in such places as Sulfur, Field, Indiana Review, and The Nation, as well as Great American Prose Poems: From Poe to the Present.  In addition to his recently-published collection of poetry, Let’s Not Call It Consequence (Shearsman Books), Deming is also the author of Listening on All Sides: Toward an Emersonian Ethics of Reading (Stanford University Press). For more information and examples of Deming’s work visit: http://www.phylumpress.com/richarddeming.