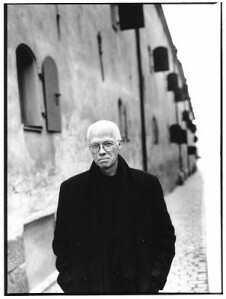 The Yale Collection of American Literature has acquired the literary archive of the poet, editor, and translator Ron Padgett. A detailed preliminary description of the archive can be found online: Ron Padgett Papers.

Ron Padgett is the author of numerous poetry collections, including You Never Know, New & Selected Poems, The Big Something, and Great Balls of Fire. His works of translation include Blaise Cendrars’s Complete Poems, Pierre Cabanne’s Dialogues with Marcel Duchamp, and Guillaume Apollinaire’s The Poet Assassinated. He has written several volumes of prose, including The Straight Line and Blood Work and two memoirs of his writing life and his friendships with poets Ted Berrigan and Joe Brainard. He has received awards and fellowships from the National Endowment for the Arts, the New York State Council on the Arts, and Columbia University’s Translation Center.

The Ron Padgett Papers consist of material created and accumulated by Ron Padgett in the course of his work as a poet, translator, and editor. Material includes extensive correspondence with other poets and writers; manuscripts for Padgett’s books of poetry, prose, and translations, as well as some juvenilia and early writings; and manuscripts for writings by others. Also included are “bokes,” the term coined by Padgett to describe the “little unique editions” Ted Berrigan and he made for each other beginning in the 1960s, which encompass dozens of unique handmade works by Tom Clark, Anne Waldman, Bill Berkson, George Schneeman, Michael Brownstein, Larry Fagin, Tom Veitch, Aram Saroyan, Steve Carey, and Lewis Warsh, among others.

Also found are notebooks, including numerous travel diaries, project notebooks, and personal journals; appointment books for the years 1971 to 2002; as well as teaching files; student papers; research material; printed material; and personal papers. The collection also contains files for White Dove Review, edited by Padgett, along with Dick Gallup and Joe Brainard, while they were high school students in Tulsa, and Full Court Press, edited and published by Padgett, Joan Simon, and Anne Waldman from 1974 to 1989.

The White Dove Review files consist of all known correspondence and manuscripts, including those of Allen Ginsberg, Jack Kerouac, e. e. cummings, Robert Creeley, LeRoi Jones, David Meltzer, and Ron Lowinsohn, among others, and provide documentation of the magazine that helped launch Padgett’s career and that influenced many of the Second Generation New York School little magazines and presses.