Simon of Trent in Print 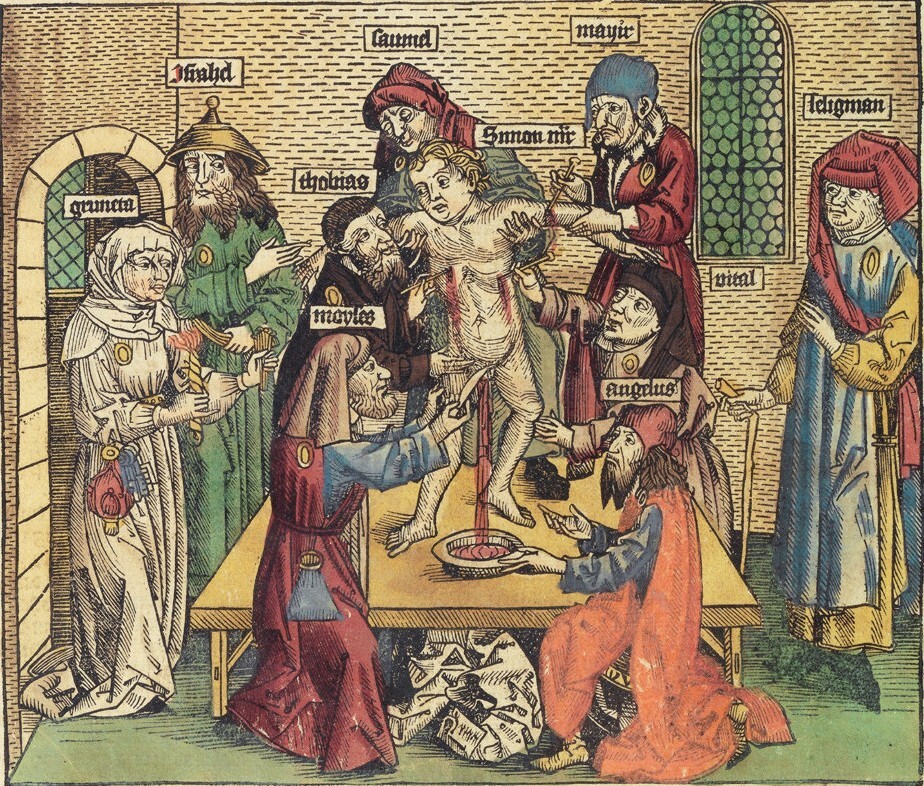 The Beinecke Library has added to its already strong collection of print materials relating to the supposed martyrdom of Simon of Trent in 1475, one of the most famous ritual murder or blood libel cases that set off a wave of vicious anti-Semitism leading to the torture, death, or forced conversion of many Jews throughout Italy and Germany.  The new acquisition, Consilia et quaestiones : celeberrimi utrius[que] iuris monarche d[omi]ni Oldradi de Ponte de Laude… by Oldrado da Ponte (Rome: Vitus Puecher, 1478), acquired on the T. Kimball Brooker Italian Renaissance Fund, was purchased at auction from Sotheby’s in 2019.  The volume was acquired because of a short treatise attached to the Consilia written by Johannes Franciscus de Pavinis, entitled  Responsum de jure super controversia de puero Tridentino a Judaeis interfecto (Juridical response on the controversy of the killing of the Tridentine boy (Simon of Trent) by the Jews).There were many controversies surrounding the killing of Simon and the trial that followed, including the qustion of whether the Jews were guilty, but most Christian writing centered on legal questions about the authority of the bishop, Johannes Hinderbach, who had been ordered by the pope to leave the Jews alone. He instead went against these papal prohibitions and promoted the cult of the boy martyr, Simon 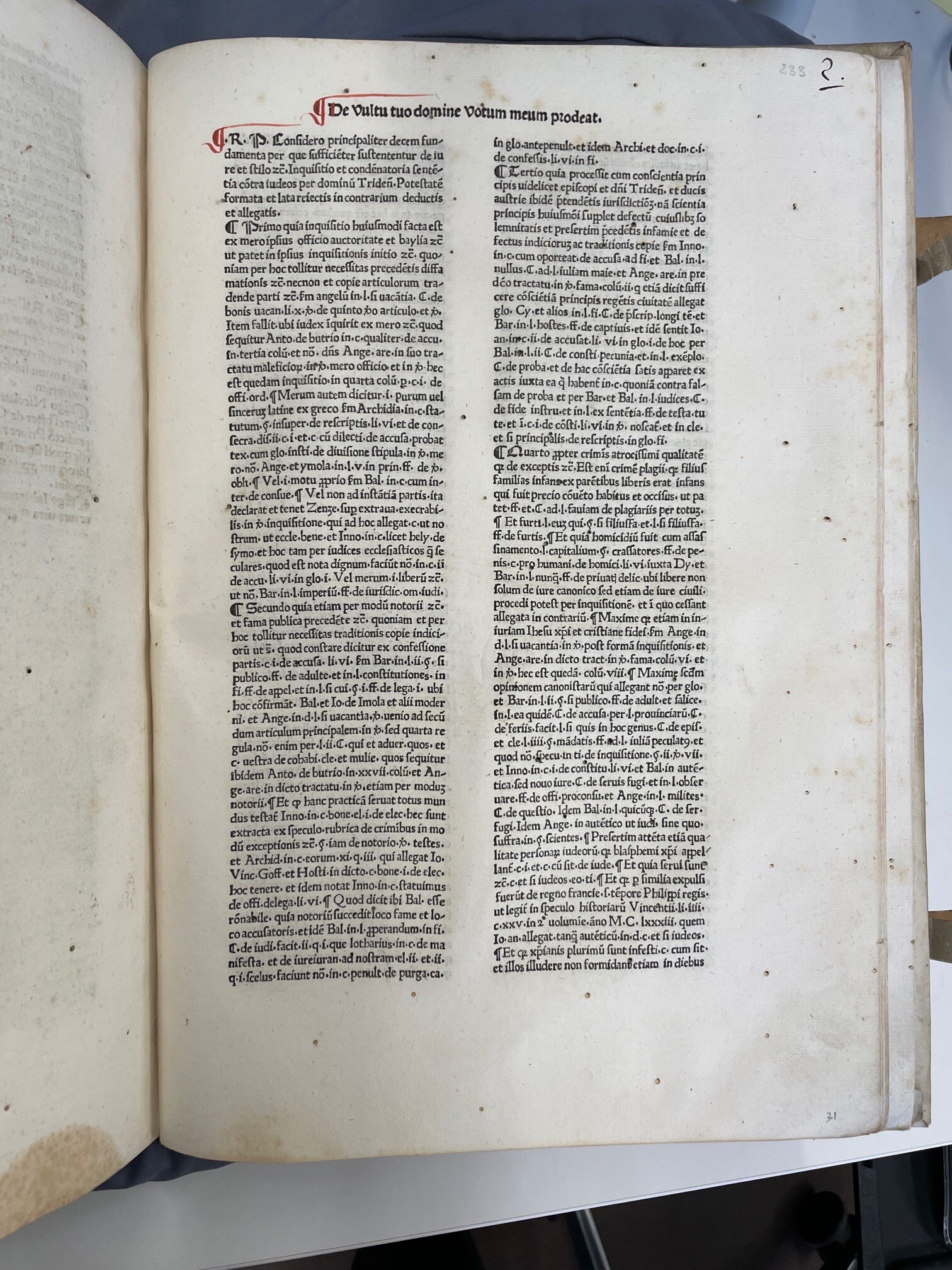 Johannes de Pavinis was not a disinterested observer, but a legate sent by Pope Sixtus to rule on Hinderbach’s actions that seemingly flew in the face of the pope’s orders to not hurt the Jews or prosecute ritual murder accuations.  As the description from Sotheby’s states:

“The two supplementary quires, printed here for the first time, contain a lengthy legal responsum by Pavinis regarding the supposed ritual murder of the boy Simon of Trent. In the summer of 1475 Sixtus IV learned of the rapid trial and executions of the Jews of Trent, which seemed to impinge on his papal prerogatives. He sent a representative to investigate the matter, Battista dei Giudici, bishop of Ventimiglia; although a Dominican and no friend to the Jews, he was soon convinced that the trials had been corrupt, and that the Jews had been entirely innocent. This created a problem for Sixtus; the Prince-Bishop of Trent who had supported the trials, Johann Hinderbach, had powerful allies in both Church and Empire, and he also accused dei Giudici of collusion with the Jews. Sixtus appointed a commission of cardinals to investigate further, with Pavini as their legal consultant. Pavini was co-opted by Hinderbach, resulting in a delayed and mixed judgement, embodied in Sixtus’ papal bull of 20 June 1478. Sixtus declared that no cult of Simon as martyr was to be allowed, but that the original judicial process had been right and fair. Pavini convinced his friends in Trent to contribute 30 ducats for the costs of printing 300 copies of his Responsum, to be attached to his enlarged edition of the Consilia of Oldradus; and he seems to have been given an additional reward by Hinderbach. Besides defending the legitimacy of the trial against the Jews of Trent, Pavini argued that the forced conversion of the women and children of Trent was proper, despite Thomas Aquinas’s statements against forced conversions.” (accessed February 19, 2022)

Little research has been found on Johannes de Pavia’s treatise and the impact that it might have had on subsequent ritual murder accusations.  This important resource is available for study at the Beinecke Library.

Other important holdings on Simon of Trent in the Beinecke Library include:

Elissa Bemporad. Legacy of Blood: Jews, Pogroms, and Ritual Murder in the Lands of the Soviets. Oxford, 2019.

E. M. Rose. The Murder of William of Norwich: The Origins of Blood Libel in Medieval Europe. Oxford, 2015.