Spring Exhibitions at the Beinecke Library 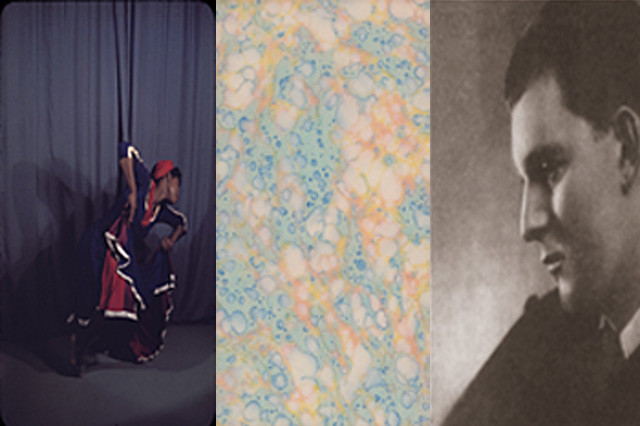 “Blue: Color and Concept” tracks a single idea across the Beinecke’s collections to provide a cultural history of the color blue in 19th- and 20th-century arts and letters.

“This is a unique approach to exploring the library’s collections,” says Nancy Kuhl, curator of poetry in the Yale Collection of American Literature, who organized the exhibition. “It exposes dense, meaningful connections among the materials displayed that might be overlooked were these seemingly unrelated objects organized by the traditional library method of author, title, and subject.”

Under the Covers: A Visual History of Decorated Endpapers: Jan. 18 – May 31

“Under the Covers” traces the development of endpapers, the sheets of paper pasted to the inside covers and front or back pages of books, from their utilitarian beginnings in medieval times through the present day.

Endpapers developed from a practical need: to protect illuminations from the wear of the hardwood boards that were covers of medieval books. Over time, publishers began using endpapers for decorative effect. Some are integral to the narratives that they envelop, such as E.H. Shepard’s map of the 100 Aker Wood featured on the endpapers of A.A. Milne’s 1926 “Winnie-the-Pooh.” The exhibition showcases a wide variety of endpaper styles, from silken and marbled endpapers to Dutch gilt and “Images Populaires” designs.

“Endpapers can be beautiful and engaging works of art,” says Elizabeth Frengel, the Beinecke’s research librarian, who organized the exhibition. “We hope visitors will leave the exhibition with an appreciation for these easily overlooked bibliographic treasures.”

Stephen Tennant (1906-1987) is mainly remembered for his striking appearance and position as one of the “Bright Young People,” a group of upper-class British artists, writers, and bon vivants. “Work in Progress” highlights the literary and artistic potential found in his personal archives.

Tennant spent decades writing a novel, “Lascar,” which he never finished. Still, he left a legacy of archival documents, including drafts of his novel, hundreds of poems, detailed drawings, and correspondence with his friends and family, including Willa Cather. The Beinecke acquired several groups of material to partially reconstruct his archives. The exhibition draws upon this documentary legacy to provide a well-rounded portrait of the artist.

“The popular image of Tennant is that of a faded aesthete camped in bed at his country estate for decades, working on an unfinished novel,” says Timothy Young, curator of modern books and manuscripts, who organized the exhibition. “But the full story is more complex. His documentary legacy, while fragmentary, shows a highly inventive mind and supremely creative hand.”