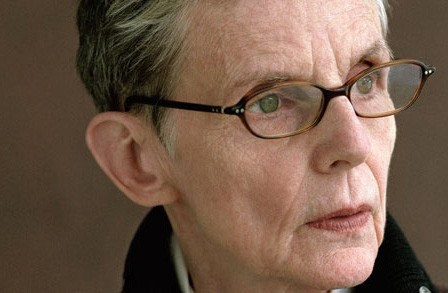 From the Poetry Society of America:

Susan Howe is the author of more than a dozen books of poetry including That This from New Directions, which received the 2011 Bollingen Prize; The Midnight; Pierce-Arrow; Frame Structures: Early Poems 1974-1979; The Nonconformist’s Memorial; and Singularities. She is also the author of The Birth-Mark: Unsettling the Wilderness in American Literary Theory; My Emily Dickinson; Spontaneous Particulars: The Telepathy of Archives; and The Quarry, a finalist for the PEN/Diamonstein-Spielvogel Award for the Art of the Essay. A new collection, Debths, is forthcoming this spring from New Directions. She has been awarded a Guggenheim Fellowship and a Fellowship to the American Academy at Berlin, and she is a member of the American Academy of Arts and Sciences. She has served as a Chancellor of the Academy of American Poets and held the Samuel P. Capen Chair in Poetry and the Humanities at the State University New York at Buffalo.

The 2017 Annual Awards ceremony, which will honor Susan Howe and celebrate the winners of the Poetry Society of America’s 10 other annual awards will take place on Wednesday, March 29th, at 7:00pm at The National Arts Club in New York City.

The Poetry Society of America, the nation’s oldest poetry organization, was founded in 1910 for the purpose of creating a public forum for the advancement, enjoyment, and understanding of poetry. Through a diverse array of programs, initiatives, contests, and awards, the PSA works to build a larger audience for poetry, to encourage a deeper appreciation of the art, and to place poetry at the crossroads of American life. The PSA’s signature program is Poetry in Motion, featuring poems on transit systems across the country.