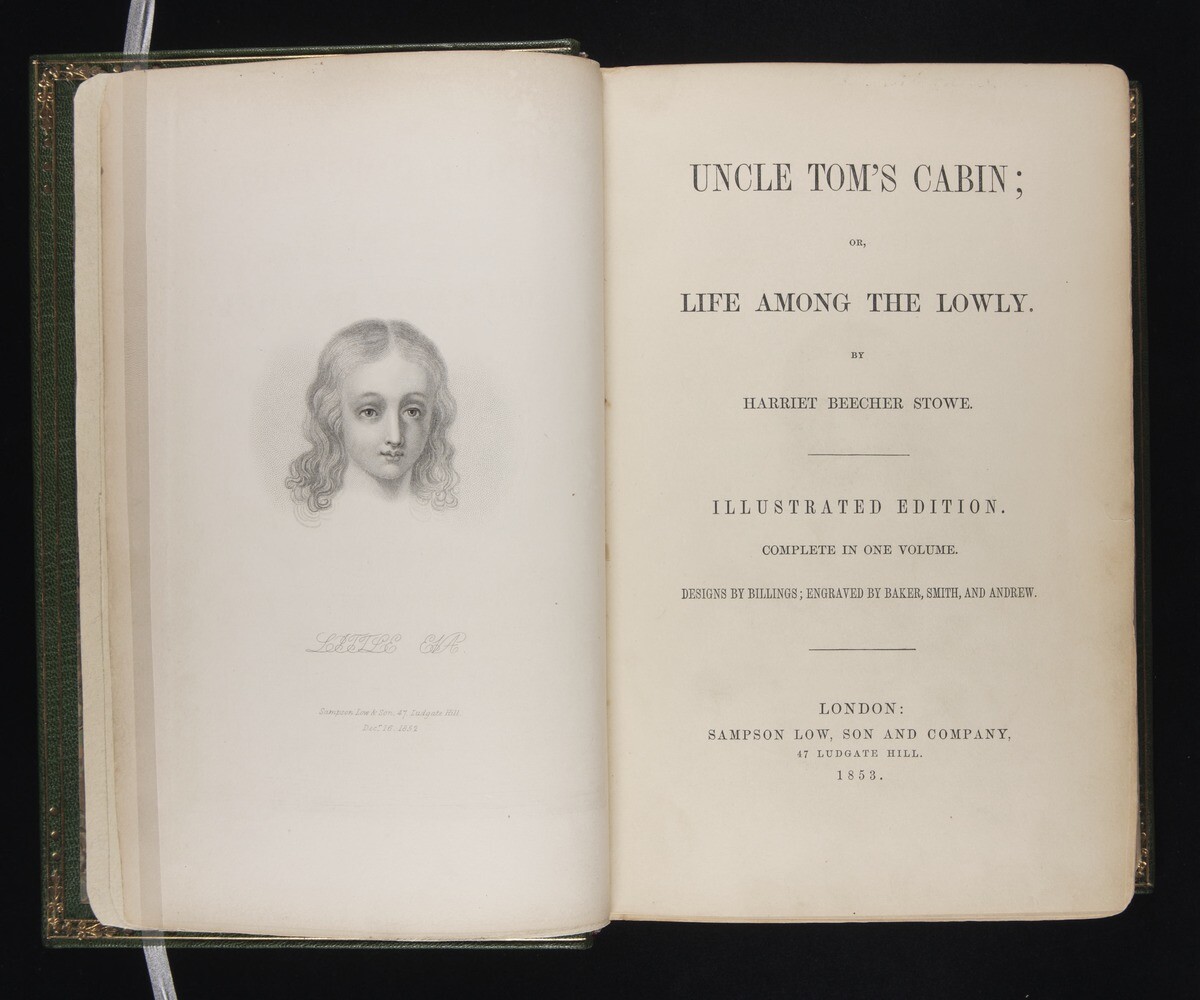 Harriet Beecher Stowe’s novel, Uncle Tom’s Cabin, is unique in 19th century American print culture. It played an important role in abolitionist movements of the period and it was a popular sensation—songs, stage plays, children’s books, and parlor games allowed readers to encounter the work and its characters in an unprecedented array of formats.

Materials in the Beinecke Library collections related to the novel offer opportunities to consider the publication and reception of this exceptional work and to explore aspects of 19th century American print culture.

An illustrated history of the novel and its reception can be found on the Beinecke Library’s wesite: The Life of Uncle Tom. Timeline excerpted from Kendra Hamilton’s “The Strange Career of Uncle Tom: on the 150th Anniversary of the Publication of Uncle Tom’s Cabin, Scholars Reflect on the Legacy of the Groundbreaking Novel and its Author Harriet Beecher Stowe,” in Black Issues in Higher Education, June 6, 2002, 19.8, p. 22.

Selected titles in the Beinecke Library have been added in bullet points, with call numbers in bold and relevant library catalogues and online resources linked.

1850: Passage of the Fugitive Slave Law, requiring all citizens to return runaway slaves to their owners, becomes a major catalyst for Harriet Beecher Stowe’s antislavery writing.

1851: Uncle Tom’s Cabin is serialized in The National Era, an abolitionist newspaper.

1852: Uncle Tom’s Cabin is published as a two-volume book, precipitating a wave of “anti-Tom” novels defending the South, an enormously profitable merchandising movement and stage adaptations that owed far more to the blackface minstrel tradition than to the ideas in the book.

1853: A Key to Uncle Tom’s Cabin is published to corroborate the facts of the novel; George Aiken’s unauthorized stage version takes the nation by storm.

1856: The Dred Scott decision legalizes slavery in the territories; Stowe publishes her militant and neglected antislavery novel, Dred: A Tale of the Great Dismal Swamp.

1857: Sam Green, a free Black living in Maryland, is sentenced to 10 years in prison for owning a copy of Uncle Tom’s Cabin and a map of Canada.

1861-65: The Civil War years see the rise of theatrical troupes that perform only Uncle Tom’s Cabin—popularly known as “Tommers” or “Tom Shows.”

1866: The Ku Klux Klan begins its reign of terror in the South.

1868: The 14th Amendment makes citizens of the formerly enslaved.

1870: The 15th Amendment guarantees voting rights for the formerly enslaved.

1876: The first African American performs the role of Uncle Tom in a production in Richmond, KY.

1877: Reconstruction ends with the withdrawal of federal troops from the South.

1880s: Period sees the rise of elaborate spectacles in staging the play: “Double Mammouth” (sic) productions, inspired by the practice of combining two circus companies into a single “Mammouth” show; and the use of live animals, including bloodhounds, Great Danes and even, in one memorable staging of Eliza’s flight across the ice, alligators.

1893: Uncle Tom’s Cabin is a featured attraction at the Chicago World’s Fair.

1890s: An estimated 500 “Tom” companies are touring the United States.

1903: The first film version of Uncle Tom’s Cabin is screened.

1914: An African-American actor plays Tom on screen for the first time.

1915: “Birth of a Nation” begins the modern film era and gives birth to a revivified Ku Klux Klan as a nationwide political force.

1923: The Duncan Sisters, Rosetta and Vivian, bring the play “Topsy and Eva” to vaudeville. By 1927, they will have played the roles 1,872 times. There are continuous revivals, on stage and television, until Rosetta’s death in 1959. More information on Topsy and Eva is available online.

1927: Number of Tom companies dwindles to 12; Universal Studios films a $1.2 million adaptation of the play.

1940s: Complaints from the NAACP shut the “Tom Shows” down.

1975: In the first Uncle Tom’s Cabin production of the modern era, New York producers return to the novel to create a “dignified” Tom.