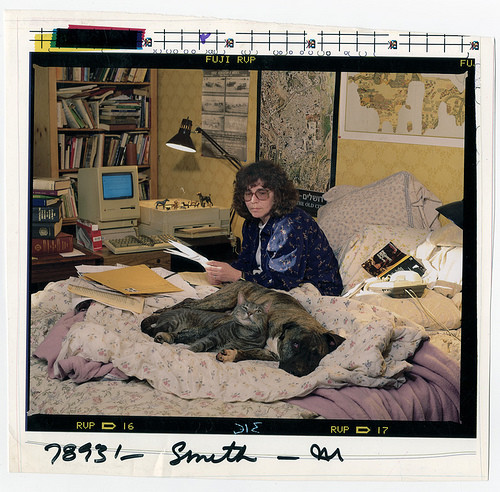 The papers of the writer and animal trainer Vicki Hearne have been processed and are available for use.

Born in Austin, Texas in 1946, Hearne grew up in Texas, Louisiana, and Mississippi before studying writing at the University of California, Riverside and receiving her B.A. in 1969. She began her dog and horse training career in California in 1967 after learning she had a talent for the work when she trained her own dog under the mentorship of Hollywood animal trainers Bill and Dick Koehler. She continued to work with animals throughout her life.

Hearne’s writing was informed by her work with dogs and horses and by the philosophies of Plato, Nietzsche, and Wittgenstein, among others. Her published collections of poetry include Nervous Horses (1980), In the Absence of Horses (1983), and The Parts of Light (1994). Many of her poems were published in poetry and mainstream magazines. A posthumous work, Tricks of the Light, edited by her friend and mentor John Hollander, was published in 2007.

Hearne addressed issues of animal behavior and the ways in which animals communicate with humans in her books of nonfiction and in magazine and journal articles. She authored Adam’s Task: Calling Animals by Name and Animal Happiness, and co-authored the book Horse Breaking: the Obedience Method with Bill Forest. Her articles “Talking With Dogs, Chimps and Others,” and “How to Say Fetch,” were published in Raritan in the early 1980s. She was published in American magazines including The Atlantic Monthly, Harper’s, and The New Yorker, and in foreign publications including the Japanese edition of Esquire magazine.

An ardent defender of breeds of dogs labeled by legal authorities as innately dangerous, Hearne served as an expert witness on dog behavior beginning in the 1980s. Her experiences while defending a dog (mistakenly identified as a pit bull) that had been sentenced to death for his biting offenses in Stamford, Connecticut, were the subject of her book, Bandit: Dossier of a Dangerous Dog. The events surrounding the Bandit case were also chronicled in a documentary film, A Little Vicious, which was nominated for an Academy Award in 1992.

The Vicki Hearne Papers consist of correspondence, writings, personal papers, photographs, audiotapes, and clippings, and span the years 1955 through 2001, with the bulk of the material dating from 1980 through 2001. The papers document the development of her writing from her works of poetry in the 1970s, through the books and articles she wrote in defense of dogs at the turn of the twenty-first century. The majority of the correspondence consists of letters from friends, family members, colleagues, publishers, and editors.

Files relating to animal training and material accompanying the drafts of her writings reveal her professional and personal connection to her own companion animals and to those of her friends and colleagues.

A detailed description of the papers can be found online: Vicki Hearne Finding Aid. Hearne’s published work can be located by searching Yale’s online Orbis database.