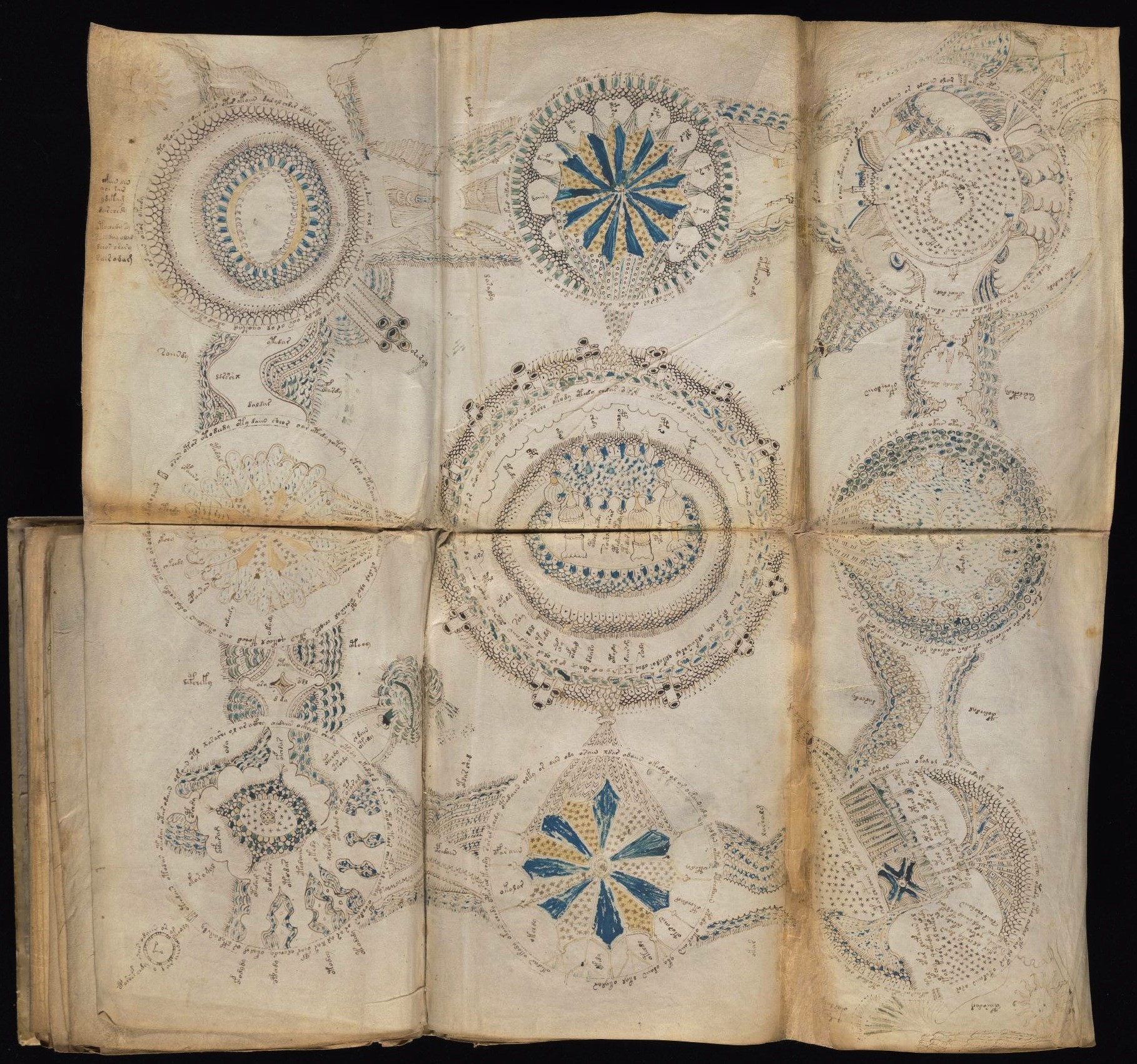 Gorbos’ piece, “Such Sphinxes as These Obey No One but Their Master,” was performed by Roomful of Teeth, a vocal ensemble that seeks to encompass multiple singing styles, including “Tuvan throat singing, belting and pop techniques, yodeling, [and] Inuit throat singing… ” The crowd on the Beinecke Mezzanine was well overcapacity, reaching almost 140 people. Gorbos’ composition spoke to both the beauty and complexity of the manuscript and the sounds he coaxed from the ensemble filled the room with rich, warm and compelling music. It was a stunning performance of a unique song.

Hear the composition “Such Sphinxes as These Obey No One but Their Master,” on Gorbos’s webpage here.

Gorbos wrote about his encounter with the manuscript and how he incorporated all of its strangeness into his piece in the program for the performance:

“The Voynich Manuscript (MS 408 in the Beinecke’s collection) has piqued human interest since it first surfaced in the court of Emperor Rudolf II in the late 16th century. (Radiocarbon dating completed in 2011 has dated it to the early 1400s.) MS 408’s florid script has remained completely indecipherable: perfectly legible (and resembling some western scripts of the period), the characters that make up the script do not add up to any known language. Indeed, it’s the lavish illustrations (present on every page) that have led to the general consensus to label some sections as herbals, astronomical, biological, cosmological, pharmaceutical, and recipes. Like the script, the illustrations have also resisted complete explanation: the plants in the herbal section are like none found on this earth; likewise, the astronomical charts do not belong to anything in our heavens charted by astronomers. These curiosities have prompted some to theorize that MS 408 is nothing more than an elaborate hoax, likely made by alchemists looking to extort money from Rudolf II. Yet some of the foremost minds in cryptology, from the 16th century to the present day, believe that the text is an elaborate code.  Linguists have found that the ordering and frequency of characters in the script have all the qualities of language; analysis of the writing reveals it to be in the hand of someone practiced at writing this script fluently. Some believe it to be in a hybrid language, because of some similarities in morphology to language families in East and Central Asia. Others claim that the text is an example of transcribed glossolalia, or even that the book was deposited on our planet by aliens. The Beinecke gets regular requests from individuals wishing to ingest pieces of the manuscript (or, in some cases, just lick), inspired by a belief in its healing properties.

“Without a real stake in the outcome of Voynich interpretation, I find the subjectivity in all these interpretations beautiful and moving. The process of construction meaning from the many variables at play in MS 408 made me think about the myriad approaches to constructing music. Why do certain notes and rhythms follow other notes and rhythms? Is a composer’s process ever completely explainable? There might be a code a work, but how deep does that code go, and could anyone ever actually crack that code? Does it even matter that the logic of the piece is perceived while experiencing it, and why might a listener privilege objective truth in considering music?

“Roomful of Teeth has skillfully absorbed the means of vocal production from various cultures across the planet. What I found fascinating was how these techniques, divorced from their original cultural practice, could be assembled into some new language. How could I make sense of Tuvan throat singing layered on top of Swiss yodeling? There might be a logical grammar at work, but a beautiful assemblage of sounds might also just be a happy inspirational coincidence, never to be heard from again. In any case, while I do hope this piece stirs and soothes you, I can assure you that eating my manuscript will not heal any maladies from which you might be suffering.  The title of my piece, Such sphinxes as these obey no one but their master, comes from a letter written in 1666 by Jan Marek Marci (this letter is also in the Beinecke’s collection). Marci, a Jesuit priest who possessed the book for a time in the mid-1600s, sent the book off to Athanasius Kircher in Rome, hoping he could make something of it. Kircher, known in his day as the premier Egyptologist, failed to make any headway with a translation.”