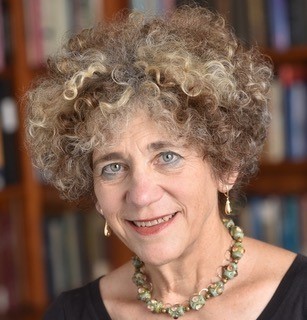 The Beinecke Library is pleased to announce the inauguration of the Beinecke Distinguished Fellowship in the Humanities, a year-long visiting research fellowship. This five-year long fellowship program will bring prominent scholars, writers, and artists to the Library to investigate projects related to the broad theme: “Material Cultures: Reading, Writing, Research.”

We are thrilled to welcome our inaugural fellow, Johanna Drucker, for the 2018-19 academic year.

Johanna Drucker is the Breslauer Professor of Bibliographical Studies in the Department of Information Studies at UCLA. She is internationally known for her work in the history of graphic design, typography, experimental poetry, fine art, and digital humanities. A collection of her essays, What Is? (Cuneiform Press) was published in 2013 and Graphesis: Visual Forms of Knowledge Production (Harvard University Press) appeared in 2014. Digital_Humanities, co-authored with Anne Burdick, Peter Lunenfeld, Todd Presner, and Jeffrey Schnapp, (MIT Press) was published in 2012.

In addition to her academic work, Drucker has produced artist‘s books and projects that were the subject of a retrospective, Druckworks: 40 years of Books and Projects, that began at Columbia College in Chicago in 2012. She is currently working on a database memoir, ALL the books I never wrote or wrote and never published. Recent creative projects include Diagrammatic Writing (Onomatopée, 2014), Stochastic Poetics (Granary, 2012), and Fabulas Feminae (Litmus Press, 2015). In 2014 she was elected to the American Academy of Arts and Sciences and awarded an honorary doctorate of Fine Arts by the Maryland Institute College of Art in 2017.

Drucker’s most recent work includes two titles published in 2018, The General Theory of Social Relativity, (The Elephants), and Downdrift: An Eco-fiction (Three Rooms Press). Her 1988 work, Bookscape, is featured in the “Artists and their Books” exhibit at the Getty Research Institute in summer 2018.

In 2017, the Yale Collection of American Literature at Beinecke Library began acquiring Johanna Drucker’s literary archive. The Library’s holdings include a rich collection of Drucker’s published works, including examples of her work as a printer and bookmaker as well as her numerous collaborations with other writers and artists.

As the inaugural Beinecke Distinguished Fellow in the Humanities, Drucker’s research will focuse on the historiography of the alphabet. Of her project, Drucker writes: “My research asks how various epistemological frameworks of belief constitute the ‘alphabet’ as an object of discourse. The project is bibliographical at its core,  and based on tracking the transmission of knowledge across textual and graphical evidence, but its thesis is that historians, archaeologists, biblical scholars, antiquarians, and other scholars produce the ‘alphabet’ within their frameworks of belief. Current forensic approaches to the archaeological and epigraphic evidence, for instance, claim cultural neutrality in a way that is completely at odds with the biblical foundations of 19th century Charles Forster’s The One Primeval Alphabet. One of the goals of this project is to replace the ‘corrective’ now-we-know biases of presentism with a respect for the cultural otherness of the past and the explanatory force of earlier paradigms, while also identifying the biases of scholarly practice identified in the work of Martin Bernal, whose Cadmean Letters is one of the few synthetically critical contributions to this field.”

The Beinecke Distinguished Fellowship in the Humanities is organized by a Fellowship Committee made up of Beinecke Curators and Yale Faculty in various areas ranging from the early modern through the present, across Yale’s British and American fields and collections. The Committee selects fellowship candidates based on the excellence of their work; there is no application process.