“When the Duchess Was Dead” 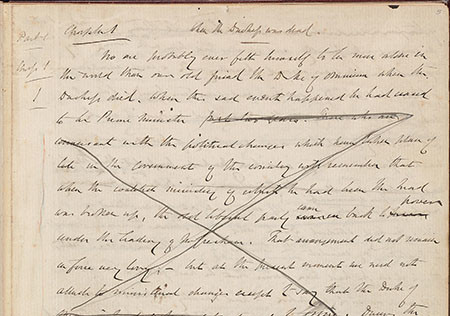 When Anthony Trollope began writing the last Palliser novel, The Duke’s Children, he made swift dispatch of a much-loved character in the series: Lady Glencora, Duchess of Omnium. In the opening paragraphs of the first chapter, the Duchess complains of a head cold, and by the end of the third paragraph, she has breathed her last. A risky move, but gluttons of Trollope can take heart. They still have 80 more chapters of incisive psychological drama awaiting them.

From Trollope’s point of view, however, even those 700-odd pages are not enough to bring the tale of Plantagenet Palliser to a satisfactorily rounded close. The original manuscript for The Duke’s Children contains roughly 65,000 more words than the published version and was intended to be a book in four volumes. Trollope was asked to cut more than a quarter of the novel, a task he did not relish: “How two words out of every six are to be withdrawn from a written novel, I cannot conceive.”

But cut he did, as is plainly evident from this manuscript draft of the first page of Chapter 53, “Then I Am as Proud as a Queen.”

Earlier this year, the Folio Society published a fully restored version of The Duke’s Children, using the Beinecke’s manuscript.

Trollope published 47 novels during his lifetime. For much of his writing career, he also worked for the postal service (Trollope invented the red pillar postbox) until he resigned at age 52 in 1867, by then having an income from writing that was large enough to compensate for the lost pension.