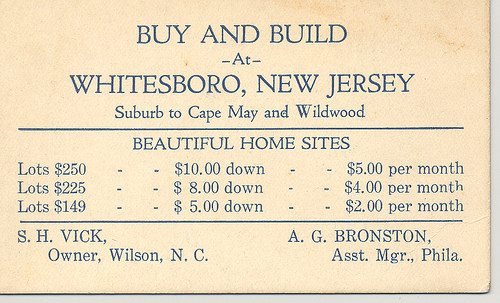 The James Weldon Johnson Memorial Collection has acquired a small collection of sales materials for properties in Whitesboro, a black-owned community near Cape May in New Jersey. The materials, dating from the around 1911, include brochures, testimonial statements from residents, and an application for lots. The documents refer to Congressman George H. White, a leading investor in the community and the man for whom it was named. “A great future for Whitesboro, N.J.,” announces a brochure: “Progressive Whitesboro, Industrial Whitesboro, an Educational Center, a Haven for the Negro, was the Dream of the Late Congressman Geo. H. White. His Dream to be realized in the Present Generation.” Documents also refer to Samuel H. Vick, a businessman and activist involved in promoting Whitesboro; Vick was the postmaster of Wilson, North Carolina, and a member of of the Negro Business League.

A more complete record of the materials is available in the library’s Uncatalogued Acquisitions Database: George White’s Cape May / Whitesboro, N.J. Housing Project.