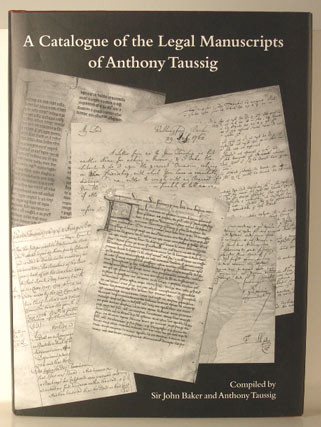 Yale University’s Beinecke Rare Book and Manuscript Library and the Lillian Goldman Law Library at Yale Law School are pleased to announce the acquisition of the Anthony Taussig Collection of English Legal Manuscripts and Printed Books, an extraordinary collection of English manuscripts and printed books from the 13th through the 19th century. The manuscript collection will reside at the Beinecke Library, and the printed collection at the Lillian Goldman Law Library.

Together, these form the world’s most extensive private collection ever assembled for the study of the cultural and intellectual history of law in England, with particular strengths in the period, from the sixteenth through the nineteenth century, when English legal thought emerged as a key global influence. In breadth and depth, the manuscript collection adds to the Beinecke Library’s already rich holdings for English social history in the early modern period, including the Osborn Collection of English Literary and Historical Manuscripts and the Boswell Family Papers.

Some highlights from the manuscript collection include:

The printed books represent a portion of Taussig’s entire collection. The acquisitions build on the Lillian Goldman Law Library’s already extraordinary holdings for William Blackstone, the most comprehensive in the world, with another 23 titles. They also significantly strengthen holdings in the fields of bankruptcy, commercial law, and law reform. WorldCat, the worldwide database of library catalogs, shows that 19 of the Taussig books are the only copies in North American libraries, and 9 of these are the only copies in any WorldCat library.

The Law Library’s acquisition of printed books was made possible by a generous grant from the Yale Law School’s Oscar M. Ruebhausen Fund.

The more noteworthy printed books include:

The acquisition is the culmination of discussions that the Lillian Goldman Law Library initiated with Taussig five years ago, over the eventual disposition of his collection. “The Beinecke Library’s offer to acquire the entire manuscript collection was decisive,” said Professor Blair Kauffman, the director of the Law Library.

Anthony Taussig has been one of the pre-eminent collectors in the field of English law over the past thirty-five years. A contributor to Katharine Pantzer’s Short Title Catalogue of Books Printed in England, Scotland, & Ireland, he is a member both of Gray’s Inn, Lincoln’s Inn, and of the Council of the Selden Society. In 2007, the Selden Society published A Catalogue of the Legal Manuscripts of Anthony Taussig, compiled by Taussig and his colleague, the eminent legal historian Sir John Hamilton Baker. Taussig’s achievements as legal bibliographer, collector, and historian have “earned him the distinction of being an STC location,” writes Nicolas Barker, in a review essay published in The Book Collector (2008), adding that “everything that he has acquired has its place in a clear vision of how the English law, mainly the common law, worked from the Middle Ages to the present day.” Kathryn James, Beinecke Curator of Early Modern Books and Manuscripts, described the acquisition as “a stunning collection for research into English intellectual and social history, in a period when England was transformed from a remote European province into the world’s leading imperial power.”