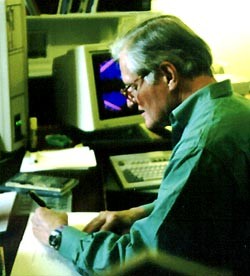 At commencement on May 26, 2008, Yale President Richard C. Levin awarded an honorary Doctor of Letters degree to poet and Bollingen Prize winner John Ashbery. Of Ashbery’s contributions to the art of American poetry, Levin said:

“You are one of the truly original poets of your time. In poem after poem, you keep your exhilarated readers off balance, capturing the spontaneous wonder of living in a world that resists the ability to capture it. Your imagination—at once witty and nostalgic—is altogether American, as capacious and unpredictable as the culture it celebrates. Your books stand among those rare works of genius that extend the poetic vocabulary. For your incomparable artistry in expressing the flux of life in a miraculous ‘still performance,’ Yale is honored to grant you the degree of Doctor of Letters.”
Ashbery is the author of numerous books of poetry and he has been awarded virtually every significant prize for American poetry, including the Yale Younger Poets Prize, the Lenore Marshall Poetry Prize, the Pulitzer Prize for Poetry, the National Book Critics Circle Award, the Ruth Lilly Poetry Prize, Harriet Monroe Memorial Prize, the Frank O’Hara Prize, the Shelley Memorial Award, and the National Book Award. More information about the poet and examples of his work can be found at the Academy of American Poets site and the Bollingen Prize for Poetry site.
A list of all the 2008 Yale honorary degrees is available from the Office of Public Affairs: 2008 Honorary Degrees.

Photograph of John Ashbery by John Tranter; Tranter’s interview with Ashbery is available in Jacket Magazine.