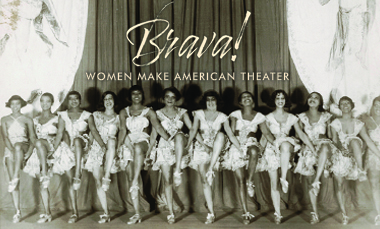 Brava! Women Make American Theater showcases, through archival materials, the ways in which women in the United States engaged in the production and reception of text-based stage performance over its long history. Far from offering a comprehensive account of women in theatrical enterprises, Brava! highlights how stage performance often mirrored, but also frequently challenged and changed, understandings of women’s roles and of women’s rights in larger U.S. society. Drawing principally on materials in the Yale Collection of American Literature and the James Weldon Johnson Memorial Collection of African American Arts and Letters, the exhibit explores how theater served as a site of women’s entry into public audiences for the arts in the 19th century, an entrée into the arts as professions in the 20th century, and a locus of calls for diversity in the arts in the 21st century.

Brava! captures intriguing moments of intersection between U.S. women’s and theater history: the sensation that was Uncle Tom’s Cabin, made so by women on the stage and in the audience; the leadership of early Black musical performers like the Hyers Sisters and Aida Overton Walker; the changing mores around female bodies conducted through the appearance of legs both on- and off-stage; and questions raised about gender identity itself both on- and off-stage. Women theater artists like Margaret Webster were persecuted equally with men by the Red Scare of the postwar period. They experimented with form, style, and venues for theatrical performance throughout the twentieth century. Numerous figures featured in the exhibit received and later led theater education in bourgeoning university programs, including Fanny McConnell at Iowa and Hallie Flanagan at Grinnell; Flanagan would eventually found the drama department at Vassar. Both Maurine Dallas Watkins and Theresa Helburn studied with George Pierce Baker at Harvard before he became one of the founding faculty members of the Yale Drama Department; Shirley Graham studied at both Oberlin and Yale. These women participated in community theater organizations over generations, such as the early Provincetown Players, the Yiddish workers theater troupe Artef, and Negro People’s Theaters in New York and Chicago. It should come as no surprise, and yet needs to be said, that women were behind innovations in musical theater, choreography, experimental writing, design, acting, theater management, and more.

The above catalogues may suggest something about the difficulty of telling a single story about women and U.S. stages. Brava! embraces a multiplicity of stories, recognizing that for each of these individuals, what it meant to be a woman, what was at stake for women’s rights or for feminism, might be different. At the same time, we recognize that Brava! is incomplete as a story, and that its omissions are suggestive of gaps–in recognition, in Beinecke’s collections, and in the larger historical record as it currently stands–for women of color, trans women, and others.

Archivists sometimes describe the life of the materials they steward as having a “second life” in becoming sources for research. It is our hope that this exhibit might return many of these figures to a second life, particularly amidst a period in which so many theaters have gone dark or struggled to remain open. In a preface to her posthumously published autobiography, appropriately titled “Curtain Raiser,” an ailing Theresa Helburn remarked on the pleasure of reflecting on her career, suggesting that to remember was almost like the experience of theater-going itself: “Best of all, I’ve felt again the ever recurring thrill, the heart-rousing moment, when the house lights go down and the footlights come up.”

Brava! invites you to remember.