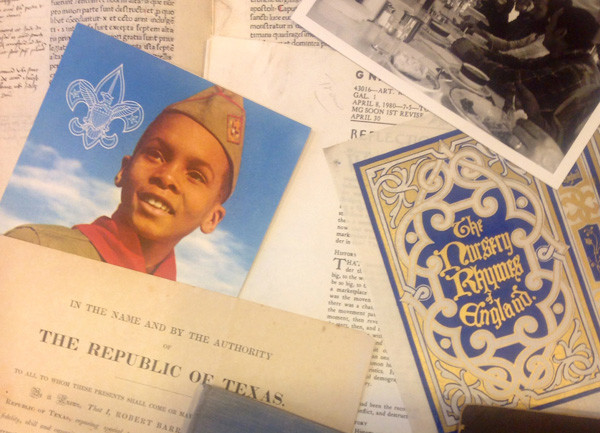 Listed below are the exhibition labels for each of the 15 collections featured in Encounters: New Small Collections at Beinecke Library. Please direct any questions or comments to Timothy Young, the exhibition’s curator, at timothy.young@yale.edu.

Robert Giraud was an assiduous chronicler of street life in Paris, publishing books on homeless inhabitants of the city and the ways they lived and communicated. His works on slang have become standard reference works for anyone interested in the argot of 20th-century French subcultures. This collection consists of notebooks in which Giraud recorded words and phrases related to sex and bodily functions, most likely in preparation for his 1992 book, L’argot d’Éros. Along with definitions, many entries include examples taken from literature and the popular press.

Edward Steichen is known as one of the most influential photographers of the 20th century, especially for his innovative approaches to fashion, advertising, and portraiture. In the early 1930s, he applied his skill in collaboration with his daughter, Mary, to create a pair of books for children: The First Picture Book: Everyday Things for Babies (1930), and The Second Picture Book (1931). On display is a selection of his original photographic prints used in the two volumes, along with first editions of both books.

Advertising scrapbooks related to the A. C. Gilbert Company

The A. C. Gilbert Company, which produced toys, games, and household products in its headquarters in New Haven, is familiar to anyone who played with an Erector building set, perhaps their best-known product. These remarkable survivals—two scrapbooks maintained by the advertising firm that marketed Gilbert products in the 1920s and 1930s—show proofs of photographs and advertisements as well as color proofs of labels for a variety of products.

The 18th century in England saw a vogue for home decorations made in China, especially porcelain plates painted with family crests and coats of arms. Many noble families also ordered matching sets of gaming counters, fashioned from mother of pearl, or nacre (the substance coating the inner shells of mollusks). These gaming counters were used as bidding and scoring chips in trick-taking card games such as Ombre, Matrimony, and Quadrille (precursors to Whist and Bridge). The collection in the Beinecke Library consists of 306 counters, fashioned in a variety of styles and shapes, and a lacquer box for holding cards and counters, attributed to William Andrew Dyer of London, England, circa 1810.

Ann Corio was one of the most famous striptease artistes of the burlesque era, starring in shows at Minsky’s in New York and the Howard Theatre in Boston.  In the 1940s, she ventured into film, starring in such exotic movies as Jungle Siren and Sarong Girl. Her best-known project was “This Was Burlesque,” a review that revived the careers of many older performers and brought the art form to younger audiences, running from 1961 through the mid-1980s. Shown here are photographs and ephemera from her papers, along with pages from classic burlesque comedy skits she wrote.

Jewel Welch photographs and other material related to African-American entertainers

This selection of memorabilia shows highlights from the career of dancer Jewell Welch. Going by the stage name “Pepper,” Welch first teamed with Candi Thorpe, playing Harlem’s Apollo Theatre and touring the northeast United States. Following Thorpe’s retirement, Welch teamed with Edwina Evelyn and they branded themselves “Salt and Pepper,” touring for nearly 15 years across the United States and Canada and performing at USO shows.

George Conover’s papers provide a look at the life of a rancher and merchant living in Indian Territory in the 19th century (before it became the state of Oklahoma). His journals note his business transactions, while personal news is reported in several letters to family members. Early photographs show residents of the town of Anadarko, founded at the turn of the 20th century.

Curtis Jackson, an accomplished Eagle Scout and Explorer who belonged to an African-American Boy Scout troop in Camden, New Jersey, documented his activities in a scrapbook—from his earliest days as a member to his later career as a troop leader in the 1950s and 1960s. He saved important documents and scouting memorabilia that show how the organization opened its membership to boys from all walks of life.

Bette Garber began her career as a copywriter and small business owner who spent time traveling the nation’s highways, often communicating on a citizen’s band radio—which led her to investigate the world of the men and women who earned their living driving the big rigs in interstate trucking. She started to take photographs in the 1970s, perhaps the golden age of the long-haul trucks, and wrote articles for trucking magazines. She covered the daily lives of truck drivers, their leisure activities, and the changing political and economic conditions that influenced their livelihood.

The members of the convivial crowd in this collection of photographs are patrons of Chez Moune, a cabaret in Paris that catered to a mainly lesbian clientele.  Opened in 1936 in the Pigalle district, the nightclub was a destination for women for decades. The photos, custom-printed matchbooks, and the printed sign are relics of an era when the club attracted crowds interested in music, champagne, and a safe space to relax with friends. The two women who appear in most of the photographs have been tentatively identified as “Madame Moune” and Délia de Val, though the archive does not provide enough information to make a definitive identification.

New Orleans and the history of the Texas Revolution against Mexico, the Pulsifer Papers focus around a letter book for the years 1832 to 1836. Joseph Pulsifer, born in Newburyport, Massachusetts, in 1805, became a druggist and a founder of the town of Beaumont, Texas. The letter book contains Pulsifer’s manuscript copies of incoming and outgoing correspondence and documents such topics as his life as a merchant, his time in New Orleans, and the political and military activities of the Texas Revolution. The letter book is a miraculous survival, as all other volumes kept by Pulsifer were lost in the 1900 Galveston hurricane. Also extant are four 1856 autograph letters, signed, from Pulsifer’s niece, Mary Phillips, to her sisters Elizabeth Sweet and Lucy Ellen Wakelee.

George W. S. Trow secured his reputation as a cult writer with the publication of “Within the Context of No Context,” his discursive dissection of modern culture published in the November 17, 1980, issue of the New Yorker. The essay was a wide-ranging analysis of how intellectual culture had shifted in the 20th century—from a society that depended on books and newspapers to one dominated by television. Though the essay has been criticized as a longing for a world that had to change, it stands as an unflinching analysis of popular culture. Shown here are pages of Trow’s original proposal for the article, interspersed with galley proofs corrected by him.

A scrapbook filled with 51 individual items documents the career of R. A. Harrison, an English artist about whom not much is known. The intertwined borders and colorful knots created for book covers are representative of an aesthetic popular in book design in the mid-19th century. Other items in the volume show that Harrison designed product labels and advertisements.

Four books from the Cathedral Library of Beauvais

A group of remarkable survivals, these four manuscript books, employed by the Cathedral of Beauvais, France, over several centuries, contain texts for celebrating daily masses. The manuscripts, from the 12th and 13th centuries, were also annotated with names of members of the congregation who had bequeathed monies or properties to the church. These acts of support were memorialized in special yearly masses said in their names—though, as evidenced by some erasures, when support ran out, these special masses were ceased.

Two groups of early printed items document the religious experience in Rome. In the first group are slim pamphlets used by Catholic pilgrims to the city, providing directions to holy sites, along with procedures for obtaining official documentation of their visits. The second group, all formerly in the collection of The Law Society of England and Wales, consists of official procedures used by the Holy See in administering functions such as costs connected with purchasing indulgences.