The Beinecke Library is one of the most significant sources for European history in North America and contains a rich collection of materials from the classical world to the Renaissance. The collection of Early European Books and Manuscripts encompasses materials produced before 1600 in Western Europe and 1700 in Eastern Europe. The holdings are very strong in Italian Humanist manuscripts in both Italian and Latin. There are a significant number of Greek manuscript and printed books from the Byzantine world. With the acquisition in 2017 of the early English manuscript collection of Toshi Takamiya, the library has become a significant holder of both Middle English manuscripts and Latin manuscripts made in England before 1500.

No single benefactor created the early collections at the Beinecke Library; rather it was built through a steady accretion of materials donated by faculty members, librarians, book collectors, and alumni, with additional purchases being made through groups such as the Yale Library Associates. Thomas E. Marston, 1927, served for many years as curator of medieval and Renaissance literature and donated 235 early manuscripts, as well as numerous incunabula to the collection. In 2017 the holdings were significantly enhanced with the acquisition of the collection of Toshi Takamiya. With a rare combination of scholarly and antiquarian expertise, Professor Emeritus Takamiya of Keio University in Tokyo assembled an unrivaled collection of medieval manuscripts. Held privately in Japan, the collection had been relatively unstudied in the West, and his generous deposit of these manuscripts at the Beinecke Library in 2013 made a significant contribution to medieval scholarship at Yale University and internationally.

The library’s collections were amassed over time from many different sources, and thus they often preserve bindings and other structural materials that otherwise might have been replaced in national or royal collections. As the early books in the Beinecke Library’s holdings were largely collected by faculty and alumni, an emphasis has always been placed on the written word rather than sumptuous illumination. A few stunning exceptions made their way to the collection, such as the unique Rothschild Canticles, and numerous books of hours, and even a fragment from the Duc de Berry’s library—the Savoy Hours—that miraculously escaped the 1904 fire in Turin that consumed the rest of the manuscript. In 1955 the library acquired eight deluxe manuscripts, six French, one English, and one Greek, which are still highlights of the collection and which were paid for by funds from the Yale University Library Associates. With the dedication of its new building in 1963 and gifts from Edwin J. Beinecke, the Beinecke Library began to collect more systematically, building on areas of its strengths and, through generous gifts, acquiring several early medieval manuscripts. At present the Beinecke has well over 1,000 pre-1500 manuscripts, and the collection continues to grow. The recent acquisition of the archive of famous American book-breaker Otto F. Ege brought the remains of his broken books to the library along with seventy manuscripts left in their original condition.

The Mellon Alchemical Collection, donated by Paul Mellon and collected initially by his wife, Mary Conover Mellon, whose interest in alchemy was sparked by Carl Jung, whose own alchemical collection is today in Zurich. The Mellon Alchemical Collection at the Beinecke Library consists of 300 items (roughly half manuscript and half printed), which  draw scholars interested in the history of science.

The Beinecke Library also contains several important early modern archives, including the Spinelli Archive (1321–1917) consisting of more than 100,000 documents dating from the fourteenth to the eighteenth century, from the palace archive of a Florentine family distinguished for their international banking and mercantile interests in the fifteenth century, their political activities in the city for several centuries, their patronage of religious institutions in Florence and Rome, and their association with the local silk guild. The Italian Castle Archive (1550–1848) contains more than 2,000 brief manuscripts and printed documents including news bulletins, diplomatic reports, histories, letters, scholarly and practical treatises, legal records, broadsides, genealogies, sermons and orations, plays, and poems. It is especially rich in material concerning the diplomatic role of the Papal States during the War of the Spanish Succession; reports on papal conclaves, instructions to nuncios, and letters from the College of Cardinals; and items pertaining to Ancona, Naples, and the D’Aste family. Other well-documented individuals and events include Innocent X; Olimpia Maidalchini-Pamphili; Queen Christina of Sweden; Cardinal Mazarin; Louis XIV; controversies concerning the Jesuits; the siege of Vienna in 1683 and the 1701 revolt against the Spanish crown in Naples; natural disasters; and the extension of papal authority. The Panat Family Papers (1200–1905) include correspondence, legal documents, and financial records dating from the thirteenth to the nineteenth century. The Panat family lived in the area around Toulouse, France, in the Haute Garonne. Family members engaged in animal husbandry and agriculture on their estates and were influential in the arts, in commerce, and in local and national politics. These archives often contain documents and books that are not registered as individual items in the catalogue and provide a wealth of social historical sources for the period.

The Beinecke Library is one of the largest holders of incunabula (the earliest books printed, made before 1501) in North America, and the collection continues to grow. The library is especially strong in classical literary texts printed in the fifteenth century and has most of the classic Reformation works as well. Recent collecting has brought some early printed Bibles and Bible fragments into the collection to complement the paper copy of the Gutenberg Bible, a gift of Mrs. Edward S. Harkness in 1926, on permanent display in its own case on the Beinecke Library’s mezzanine.

The collections are complemented at Yale by several subject-specific rare book libraries. The Yale Law Library has one of the world’s richest collection of manuscript municipal law books from Italy as well and numerous early print versions of canon and Roman law texts. The Yale Center for British Art has several important manuscripts and many early printed books from England that complement the materials the Beinecke has collected from Toshi Takamiya and other English collectors of Early English books. The Harvey Cushing / John Hay Whitney Medical Historical Library contains numerous medieval manuscripts, mostly concerning the history of medicine, and a significant cache of early printed books relating to science and philosophy. 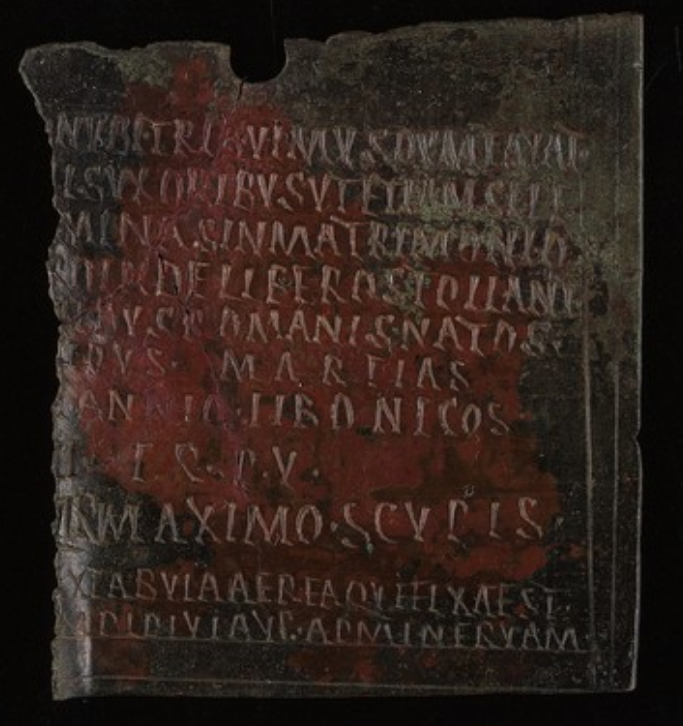 Fragment of a Roman Diploma on bronze, granting a veteran rights to marry and hold property, written in monumental capitals. P.CtYBR inv. 5069 (recto).

Early Books and Manuscripts contains the library’s holdings from the dawn of writing to 1600 CE.  While historically there has been an emphasis on objects from Western Europe, in fact the collection has always included works from Asia, Northern Africa and the Middle East. This page is designed to provide a rough introduction to the materials from around the world that can be found in the Beinecke Library, mostly from before 1600 CE. The bibliography at the end can help you locate specific collections.  If you have any questions about pre-1600 materials, please email Ray Clemens, the curator of Early Books and Manuscripts.

A fragment of Homer’s Iliad on papyrus, P.CtYBR inv. 489 qua.

Many of the earliest objects in the Bienecke Library’s collection were gathered during archeological exploration of Dura-Europos in the 1920s and 30s, a Roman town in present day Syria.  The Library holds the papryus gathered from the dig while the Yale University Art Gallery holds the objects, including frescos from one of the oldest surviving Jewish synagogues. 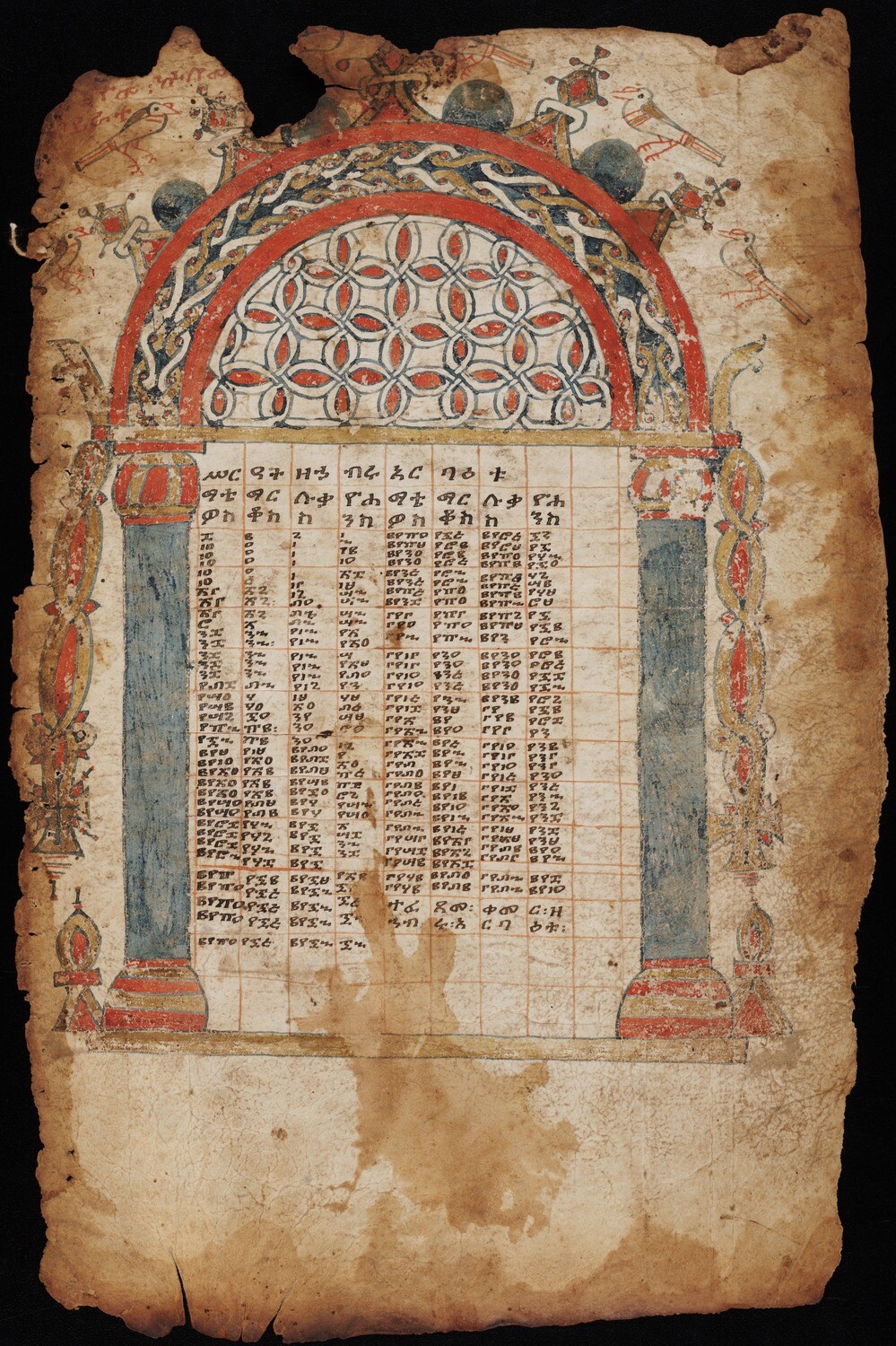 The region around present-day Ethiopia is one of the oldest continuous Christian communities and has a signficant history in the history of the book for some of the earliest bindings of the codex.  Recently, around thirty-three of the Beinecke’s Ethiopic materials have been cataloged with the assistance of Steve Delamarter of George Fox University and the Ethiopian Manuscript Imaging Project (EMIP).  Most of these materials are late nineteenth or early twentieth century, but a few are earlier and all demonstrate the sophisticated state of Ethiopic book and scroll production. 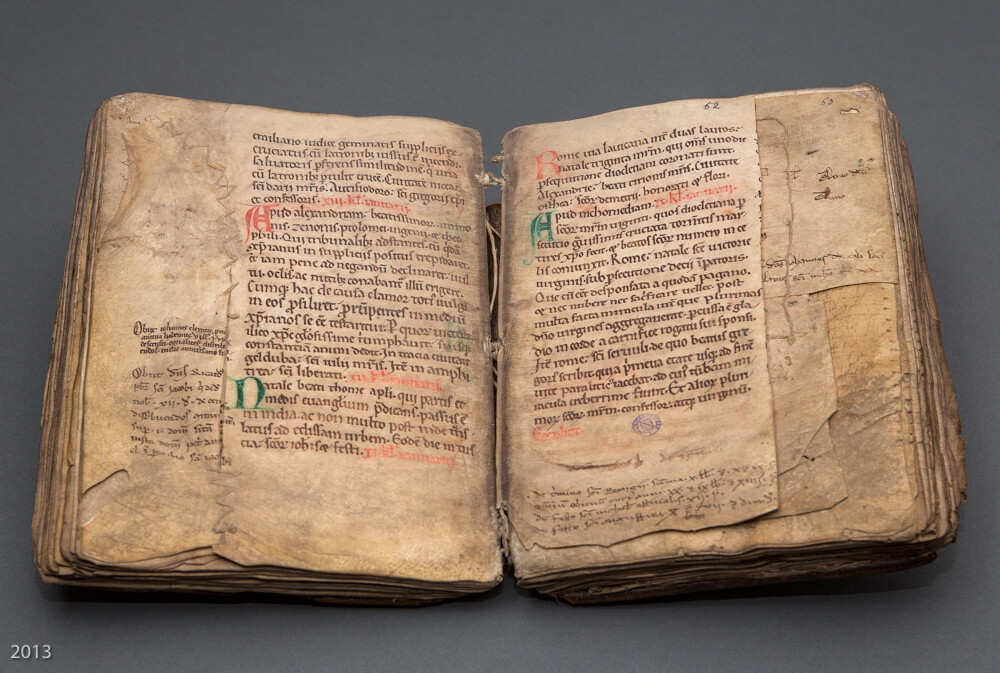 The Beinecke Library has one of the richest collections of European manuscripts in North America.  The collection is especially rich in textual manuscripts, which has been the focus of the collection from its inception to facilitate the teaching of classics and theology. 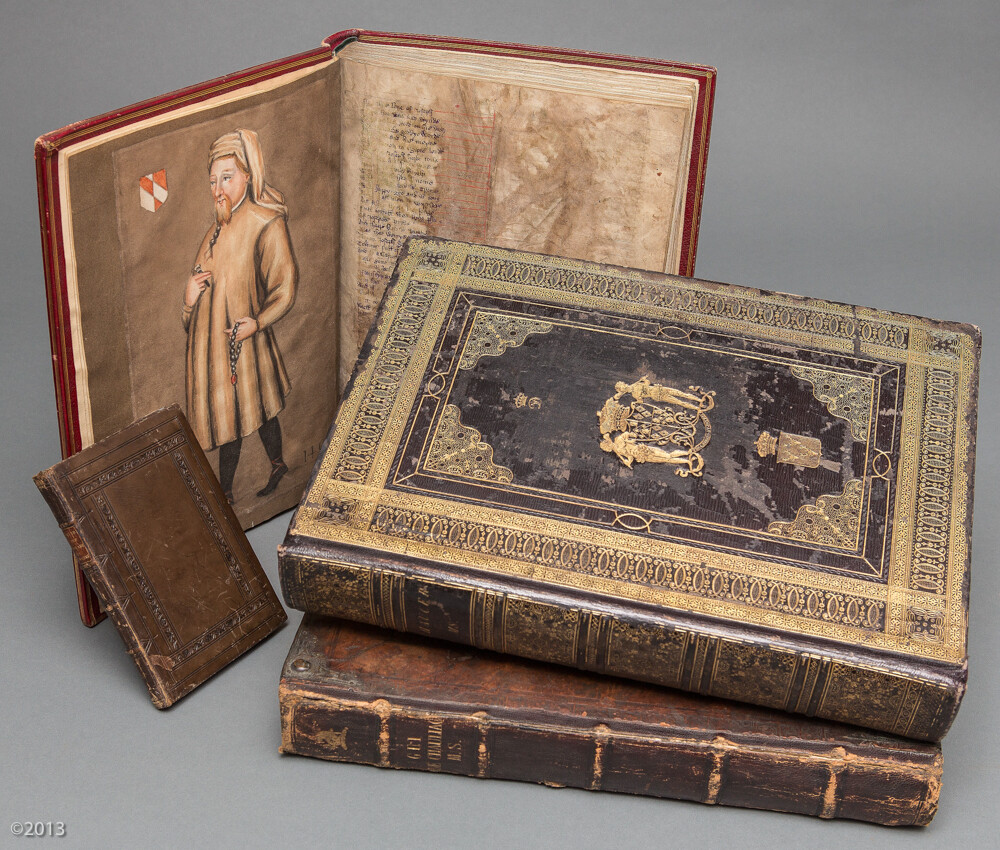 Four manuscripts containing the works of Geoffrey Chaucer (c. 1340s-1400) from the Takamiya Collection.  Three are copies of The Canterbury Tales and one a copy of A Treatise on the Astrolabe.

The collection is very strong in English manuscripts, thanks in large part to the Osborn Collection and also to the recent acquisition of the manuscripts of Toshiyuki Takamiya in 2017.

In 2016 the Beinecke Library acquired the remains of the broken manuscripts of book breaker Otto F. Ege, as well as seventy codices he purchased but had not broken.  In 2020 we acquired the collection of Stephen Keynes, which was rich in early codices and fragments.

Despite a history of being dominated by stronger hostile neighbors, Armenia has maintained a distinct linguistic and cultural tradition.  The Beinecke’s Armenian holdings were significantly increased with the acquisition of the materials from the Hartford Seminary Library in 198?, which included several medieval and early modern codices.