Photographs, paintings and drawings, letters, and ephemera documenting the lives and careers of Stieglitz and O'Keeffe. 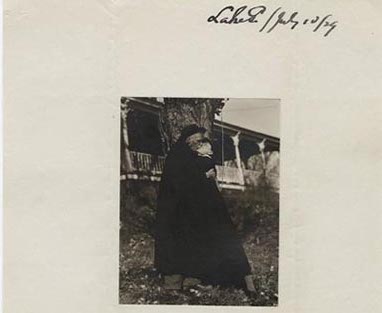 The Alfred Stieglitz/Georgia O’Keeffe Archive contains thousands of letters and hundreds of photographs in addition to a collection of literary manuscripts, scrapbooks, ephemera, fine art, and realia, primarily dating between 1880 and 1980, which document the lives and careers of the photographer/publisher/gallery owner Alfred Stieglitz and the painter Georgia O’Keeffe.

There are few figures that were more influential in the universe of twentieth-century American culture than Alfred Stieglitz (1864-1946), who attracted, encouraged, and promoted a wide circle of photographers, writers, and artists of all types through his exhibition galleries and the publications he produced. Born in New Jersey, raised in New York, and educated in Germany, Stieglitz was an advocate for aesthetic and Pictorialist photography, both in his own work and through his position as the editor of two significant journals, Camera Notes (1897–1902) and Camera Work (1902–17). He operated a series of four exhibition spaces in New York City—the Little Galleries of the Photo-Secession/”291” Gallery (1905–17), Anderson Galleries – Room 303 (1921–25), the Intimate Gallery (1925–29), and An American Place (1929–46)—in which he featured the work of international photographers he admired and a variety of modern artists he championed, including the American painters Arthur Dove, Marsden Hartley, John Marin, and Georgia O’Keeffe.

There are few couples more prominent in universe of twentieth-century American culture than Stieglitz and O’Keeffe (1886-1986), who became his second wife in 1924. She was in many ways his opposite: born and raised in Wisconsin, she studied in Chicago, Virginia, and New York, and taught art in Virginia, Texas, and South Carolina before meeting Stieglitz at his gallery in 1916. Their instant mental and physical attraction led to a forty-year relationship marked by intense devotion to each other’s life and work, made all the more remarkable when it spanned great periods of physical separation once O’Keeffe discovered her love for the landscape of the American Southwest and spent increasing amounts of time living and working there.

After Alfred Stieglitz’s death in 1946, Georgia O’Keeffe sought to collect in New York all of his personal and professional correspondence and papers, clipping files, scrapbooks, photographs, publications, exhibition-related material, and other documentary evidence of his life. In 1948, her friend Carl Van Vechten suggested to O’Keeffe that she place the Stieglitz archive at the Yale University Library, where it would join other important Modernist writers’ and artists’ papers in the Yale Collection of American Literature. O’Keeffe visited New Haven in April 1949 and subsequently made arrangements to give the collection, with the intention that her papers would follow after her death. The Alfred Stieglitz Papers were transferred to Yale between 1949 and 1953, and were supplemented through gifts and purchases from various parties from 1953 to 1980. O’Keeffe’s Papers were a bequest from the Georgia O’Keeffe Foundation in 1992, following several earlier gifts of material directly from O’Keeffe. The Stieglitz Family Papers were the gift of Flora Stieglitz Straus and Sue Davidson Lowe.

Among the images found here are photographs by and of Alfred Stieglitz and his circle of artists and writers; photographs of the Stieglitz family (including his sisters, first wife Emmeline Obermeyer, daughter Katherine (Kitty) Stieglitz Stearns, and second wife Georgia O’Keeffe); and a variety of paintings and drawings, letters and ephemera, and medals and awards from the archive. Currently, only portions of these papers are available online.