Jewish marriage contracts ranging from the 17th to the 20th centuries. 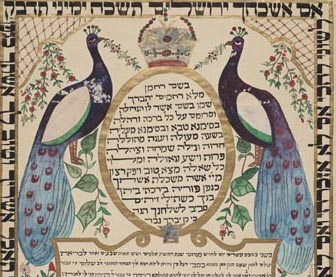 The ketubah (plural ketubot) is the standard marriage contract that Jewish law requires a groom to provide for his bride on their wedding day. It is intended to protect the woman, primarily by establishing the man’s financial obligations to her in case of divorce or widowhood. In addition to the financial clauses, the text of the ketubah outlines other obligations undertaken by the groom, including traditional conjugal rights such as food, clothing and shelter. The exact date when the ketubah became a central part of the Jewish marriage ceremony remains unknown. It is a rabbinic institution, not a biblical one, and goes back to Talmudic times (70-500 C.E.). It has been in the home of every married couple no matter what their social status and no matter what the geographical location. The rabbinic authorities considered it so basic to Jewish marriage, that a couple was prohibited from living together without one. Traditionally it must be signed by two witnesses and then read out-loud in Aramaic during the marriage ceremony. It is a public document to which the entire community is witness.

Since the ketubah is read during the marriage ceremony, and thus publicly displayed, a tradition of decorating it evolved in many Jewish communities in different parts of the world. Though the text is primarily the same in all Jewish communities, no one style characterizes the art of the ketubah. Different Jewish communities adopted styles and even shapes for their ketubot that were characteristic of their localities and often reflected the artistic traditions of the countries in which they lived.

Ketubah decoration not only adds beauty and meaning to what otherwise would be a rather dry legal document, it has much to teach about the individuals and the communities for whom they were produced. Italian ketubot reflect the openness of Italian Jewry to the rich artistic heritage of its surrounding culture. The illumination of marriage contracts from Muslim lands reflects their cultural and religious norms. No human figures appear in the decorations. Instead the themes are drawn from the plant and animal worlds. This is in keeping with Muslim (and Jewish) sensibilities which frown on the artistic depiction of humans lest it lead to idolatry. The only Jewish communities from which we do not have hand decorated ketubot are those of Eastern and Central Europe. According to the scholars Shalom Sabar and Vivian Mann this is because among Jews in these geographical areas, known as Ashkenaz, ketubot were viewed as rather standard, legal documents, and were all identical.

Rabbinic law does not stipulate a specific language for the ketubah. It was meant to be understood by the parties involved and was written in Aramaic because during the period when the text was standardized, most people understood Aramaic. Today it is still in Aramaic though most Jews no longer speak or understand it. Indeed, many couples today have their ketubah written in Hebrew or a combination of languages. The ketubah displayed here are primarily in Aramaic and Hebrew.