Construction of the Union Pacific Railroad

Photographs of the Construction of the Union Pacific Railroad by Andrew J. Russell. 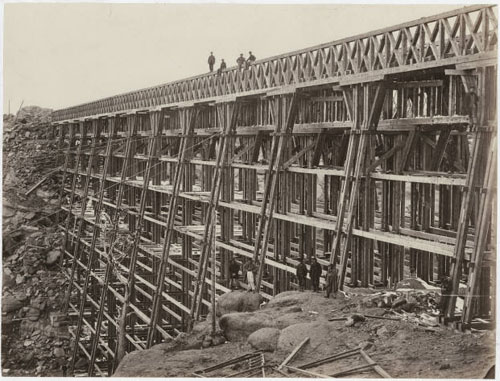 Andrew J. Russell was born in 1829. He grew up in Nunda, New York where we earned several commissions as a portrait and landscape painter. In 1862 he helped organize a local militia unit for service in the Civil War. While in the army, in February 1863, he learned photography from Egbert Guy Fowx, a cameraman associated with Matthew Brady’s studio. That spring, Russell was detached from his unit to assume duties as the Army’s first official photographer. Working under the direction of General Herman Haupt, he documented the construction efforts of army engineers, in particular their work on military railroads.

In 1868, Russell began a project to document the construction of the Union Pacific, the eastern portion of the first transcontinental railroad. Railroad executives, attuned to the way that photographs might enhance support for their work among investors, politicians, and the general public, offered Russell extraordinary cooperation. They assisted as Russell made three trips west, one in 1868 and two in 1869. Russell carried multiple cameras, a portable darkroom, assorted chemicals, and a supply of glass plates on which he made his own “wet-plate” collodion negatives shortly before he made a photograph. Over 200 of Russell’s imperial-plate negatives (10 x 13 inches) and more than 400 stereographic negatives (4 x 8 inches) survive today in the collections of the Oakland Museum.

On May 10, 1869, when the Union Pacific and Central Pacific railroads joined at Promontory Point, Utah, Russell was one of several photographers present to record the occasion. Afterwards, his photographs were widely distributed, often in album form, most famously in a book published by the Union Pacific Railroad, The Great West Illustrated in a Series of Photographic Views (New York, 1869). Much as photographs by the Hubble Space Telescope fascinate us today, Russell’s images of the extraordinary achievement of spanning the West by rail captured the interest and imagination of citizens across the country. His photos were used to advertise commercial enterprises in New Haven, Connecticut and a fertilizer company in Charleston, South Carolina. They were reproduced as engravings and lithographs to illustrate travel guides and converted to lantern slides for use in public lectures about the West.

The Yale Collection of Western Americana has assembled one of the largest collections of vintage prints of Russell’s railroad photographs including a set of 10 x 13 inch prints that corresponds closely to the negatives held by the Oakland Museum. The photographs document the labor entailed in building the railroad, the landscape through which it was ran, and the way his images became part of scientific, commercial and political discourse as America sought to recuperate following the Civil War.

A. J. Russell died in New York in 1902. There is no published biography, but consult Susan Danly Walther’s doctoral dissertation, “The Landscape Photographs of Alexander Gardner and Andrew Joseph Russell” (Brown University, 1983), and Susan E. Williams, “Richmond Again Taken: Reappraising the Brady Legend through Photographs by A. J. Russell,” Virginia Magazine of History and Biography, 2002, (vol. 110, no. 4) pages 437-460. For discussion of the role of Western photographs in 19th century American culture, see Martha A. Sandweiss, Print the Legend: Photography and the American West (Yale, 2002).