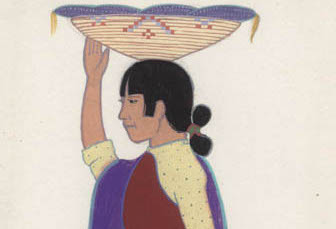 In 1916 Elizabeth Willis DeHuff’s husband, John David DeHuff, became superintendent of the Santa Fe Indian School in Santa Fe, New Mexico. Elizabeth, twenty-four years old and educated as a teacher at Barnard College in New York, quickly became interested in the art and culture of the couple’s new home, and in the students who attended the school. DeHuff began inviting boys from the school into her home for afternoon painting lessons. Students that received training included Fred Kabotie, Otis Polelonema (both Hopi) and Velino Shije Herrera (of Zia Pueblo).

Controversy eventually erupted around Elizabeth’s art instruction and methods when critics alleged that her painting sessions encouraged paganism, emphasizing traditional stories and documenting tribal religious customs. As the pictures in this collection demonstrate, students drew and painted imagery and scenes related to their heritage, using ink, pencil, and paint to anchor themselves against the foreign environment of their boarding school. DeHuff’s role in promoting certain themes is unclear, but the sheer number of images produced by the students in this collection suggest they responded with enthusiasm to her efforts.

“The true beauty and significance of this collection lies not in the talent of the artists, but in the subject matter they choose to capture. DeHuff’s students chose to paint symbols, figures, stories, dances, ceremonies, and designs of their heritage. These paintings capture both the cultures of the artists, and the spirit of a child’s outlook on the heritage that defines them. As an American Indian person, I see these paintings and they almost bring tears to my eyes. They are a window into the moment in time when my ancestors stood at the brink of losing who we are, and a testament to the strength of our identity, both then and now. Thankfully, not much has changed, and the stories and dances are still recognizable. Elizabeth Willis DeHuff is survived by a visual legacy that she helped encourage and preserve, paintings that survive along with Southwest Indian culture.

By the time her husband assumed a civic position in Santa Fe in 1927, Elizabeth had ceased working directly with students. Her interest in Native American cultures was still alive, however, and her relationships with many of her former students continued. During and after her lessons at the Santa Fe Indian School, Elizabeth wrote and published several children’s stories on Native American themes. Her books include Taytay’s Tales, a collection of Indian traditional stories illustrated with the art of her students Fred Kabotie and Otis Polelonema, published in 1922; Taytay’s Memories, published in 1924; and Swift Eagle of the Rio Grande, published in 1928.

199 drawings and watercolors by Pueblo, Navajo, Apache, Cheyenne, and Kiowa artists, much of it student work, collected by Elizabeth Willis DeHuff, wife of the superintendent of the Santa Fe Indian School and an early art instructor of many of the artists. The art work varies in size: 56 x 36 cm. and smaller.

The collection reveals connections and relationships that the DeHuffs cultivated with Indian artists in the Southwest and reveals the development and evolution of the individual style of specific artists and the prominence of certain themes and subjects in their work. Some of the work present in the collection appears to be related to DeHuff’s publishing projects, bearing crop marks and other annotations related to printing.

Over 55 individual American Indian artists are represented in the collection, including: