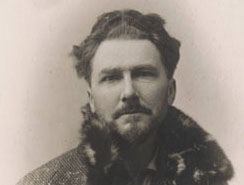 The poet Ezra Pound (1885-1972) was one of the founders and central figures of Modernism. His own poetry included the influential “Lustra,” “Quia Pauper Amavi?,” “Hugh Selwyn Mauberley,” and “The Cantos,” begun in 1915 and incomplete at his death.

Beyond his own writing, he befriended William Carlos Williams and Hilda Doolittle (H.D.); served as W.B. Yeats’s secretary; created and promoted the Imagist movement in poetry; named and promoted Vorticism with Wyndham Lewis; served as foreign editor of Harriet Monroe’s Poetry magazine and Scofield Thayer’s The Dial; and encouraged The Little Review to undertake the serial publication of Joyce’s Ulysses. He also edited and reshaped T.S. Eliot’s “The Waste Land,” submitted it to The Dial, and badgered the editors until they awarded it their poetry prize in 1922.

After moving to Italy in 1924, Pound promoted the Objectivist poet Louis Zukofsky in his own little magazine, The Exile. He also persuaded a young visitor from Harvard, James Laughlin IV, to give up writing poetry and “go back and do something useful…be a publisher.” The first New Directions anthology appeared in 1936.

During the 1930s Pound became preoccupied with the deteriorating economic and social conditions, and came to admire Mussolini. A brief 1939 visit to the United States confirmed his low opinion of his homeland, and in 1940 he began a series of broadcasts on Rome Radio, “Ezra Pound Speaking,” combining a highly colloquial explication of political and economic ideas with contemptuous attacks on American and British politicians and policies. He continued to broadcast even after the United States declared war on Italy in December of 1941; he was formally indicted for treason in 1943, and arrested by the U. S. Army in May of 1945. Confined to a temporary prison in Pisa until December, Pound began work on what would become “The Pisan Cantos.”

Declared unfit to stand trial by reason of insanity in December 1945, Pound was confined to St. Elizabeth’s Hospital in Washington for thirteen years. While there, he received visits daily from his wife Dorothy and from friends and admirers; wrote thousands of expressive and sometimes vituperative letters; and continued to work on the “Cantos”. In 1958 he was released into Dorothy’s custody, and the couple returned to Italy, but his health began to fail. In 1962 Pound joined Olga Rudge, his companion of many years, in Venice and died at her home in October 1972.

The papers were purchased from the estate of Ezra Pound and the poet’s daughter, Mary de Rachewiltz, in 1973.