Manuscripts, letters, photographs, art and objects documenting the lives and works of Stein and Toklas. 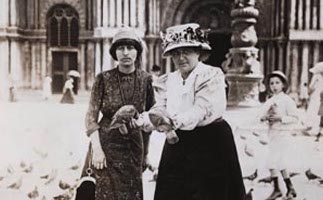 Although Gertrude Stein and Alice B. Toklas both grew up in California, they met in Paris in 1907. By that time, Stein had been living in Paris with her brother, artist Leo Stein, for four years; their flat at 27 rue de Fleurus had become home to a remarkable collection of modern art, as well as a lively salon. It was during these early years in Paris that Stein began to write, publishing her important early work Three Lives (1905).

When Stein and Toklas met, the connection between them was immediate, and Toklas soon moved in and became Stein’s partner. The two presided over one of the most famous salons in Paris, and their home became a gathering place for avant-garde writers and artists. Stein helped to launch the careers of Henri Matisse and Pablo Picasso, among others, and she attempted to translate their experiments in art into writing. Much of her work therefore rejects traditional linear narrative structure in favor of a more fractured form. Although Stein was a formidable figure among the Paris modernists and highly regarded among the writers who visited her, most critics and audiences found her work too dense and difficult. It was only with the publication in 1933 of The Autobiography of Alice B. Toklas that Stein reached a wider audience, and she and Toklas became literary celebrities.

Selected manuscripts, letters, photographs, printed materials, personal papers, and art and objects which document the life and work of Gertrude Stein and Alice B. Toklas, principally up until 1946, the year of Stein’s death.

The story of how Gertrude Stein’s papers made their way into the Yale Collection of American Literature has been detailed in an essay by Donald Gallup in the Yale Library Gazette (October 1947). The acquisition of the Stein archive came about in large part as a result of her close friendships with Carl Van Vechten and Thornton Wilder, both of whom having strong ties to Yale and encouraged Stein to donate material to the Yale Collection of American Literature. The Finding Aid for this collection includes detailed information about the history of this archive.