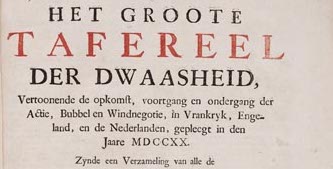 These two volumes from the Beinecke’s collections were digitized to coincide with The Great Mirror of Folly: Finance, Culture, and the Bubbles of 1720, a symposium co-sponsored by the Yale School of Management International Center for Finance, held at Yale University in April 2008.

The starting point for this conference was an extraordinary volume likely published in 1720, The Great Mirror of Folly (or, in the original Dutch, Het Groote Tafereel der Dwaasheid). Early versions of this folio were published in Amsterdam within months of the 1720 economic crashes that roiled the stock markets of England, France, and the Dutch Provinces. This large volume includes satirical engravings, plays, poems, and prospectuses, as well as maps and sample decks of playing cards. The entire work (call number: Z88 009) can be browsed here.

A second companion volume, filled with ephemera and additional prospectuses, similarly documents the events of 1720. Comprised of sixty-three distinct publications, most printed, but several in manuscript copies, this item, bound together with the same title page as the standard volume, is catalogued as Collection of company charters, prospectuses, pamphlets and regulations relating to the Dutch speculative mania of 1720 (call number 2006 Folio 21) and can be browsed here.

Both volumes can be searched together by way of the “search within this collection” box on the upper-left corner of this page.

In late 2009, the Beinecke Library acquired a copy of what appears to be a variant of the “prototype” edition of the Tafereel. This volume contains 35 of the graphic plates that would appear in the true first edition. Browse the digitized volume here.

The Great Mirror of Folly: Finance, Culture, and the Bubbles of 1720

A symposium co-sponsored by the Beinecke Rare Book and Manuscript Library and the Yale School of Management International Center for Finance.