Manuscript maps detailing the route of the Lewis and Clark Expedition to the Pacific Coast and back. 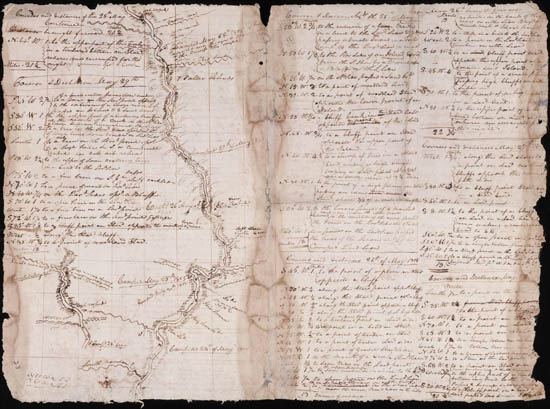 The Lewis and Clark Expedition, led by Captain Meriwether Lewis and William Clark, was the first American overland expedition to the Pacific coast and back. In 1803 President Thomas Jefferson selected Lewis, who then selected Second Lieutenant Clark, to study Western terrain, botany, geology, geography, and opportunities for commerce and expansion along the Missouri River to the Pacific. Along the way, Lewis and Clark encountered French Canadian and British trappers and several Indian tribes, including the Lakota, Mandan, and Shoshone.

The Lewis and Clark Expedition Maps consist of 83 manuscript maps and related material detailing the route of the Lewis and Clark Expedition to the Pacific Coast and back, 1804-1806. Many were annotated during the expedition. Two of the maps were drawn based on information supplied by the Mandan leader Big White, also known as Sheheke, at Fort Mandan during the winter of 1804-1805. Seventy of the maps, several of which include information supplied by Native Americans, were drawn by WIlliam Clark in the field.

These maps were kept in the Clark family after the majority of material from the expedition had been placed at the American Philosophical Society or the Missouri Historical Society. In 1903 the maps were the property of William Clark’s heirs Julia Clark Voorhis and Eleanor Glasgow Voorhis. Later, they were acquired by Edward Eberstadt & Sons, who sold them to William Robertson Coe, a railroad and insurance executive and collector of Western Americana. Coe donated the collection to the Yale Library in 1951.