One of the world's most celebrated collections of medieval songs. 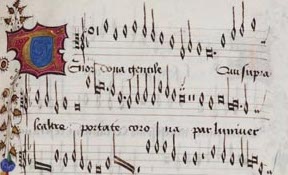 Sacred music occupies a distinguished place among Beinecke’s early books and manuscripts. MS 91, known as the Mellon Chansonnier after its last private owner, Paul Mellon, who presented it to Yale in 1940, is one of the world’s most celebrated collections of medieval songs. This beautifully calligraphed manuscript on parchment, Neapolitan in origin and dating from the mid 1470s, may have been prepared for the wedding of Beatrice of Aragon, daughter of the king of Naples, and Mathias Corvinus.

A facsimile edition with a detailed commentary has been published by L. L. Perkins and H. Garey, The Mellon Chansonnier (New Haven and London, 1979), 2 vols.