New political alphabet, or, A little book for great boys

A political alphabet rhyme for children published in 1813. 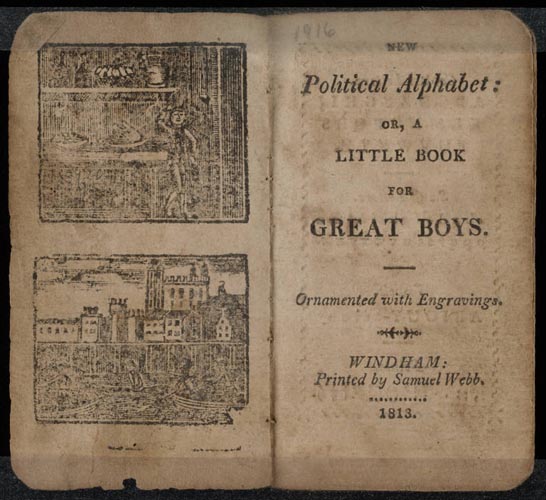 New Political Alphabet, or, a Little Book for Great Boys

This twenty-three page book of alphabet rhymes was published in Windham, Connecticut in 1813, by Samuel Webb.

For the letter A:

“Great A stands for Adam’s administration and B for betraying the rights of the nation.”

This rhyme refers to John Adams, the second president of the United States and a conservative Federalist who signed the controversial Alien and Sedition Acts in 1798. Although the New Political Alphabet was published twelve years after Adams left office, the author likely remains anonymous due to the political tone of this rhyme.

Although anointed to boys, the Beinecke Library’s copy of New Political Alphabet was owned by a girl or young woman, based on the autograph inscription: “Sally J. Waterman book” found on p. 21.