Writings, photographs, and artwork from the papers of the American soldier and Indian educator. 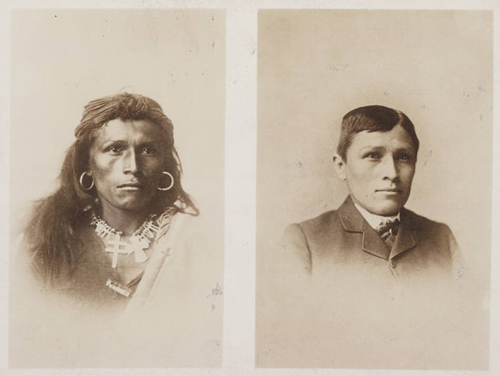 View all images
Richard Henry Pratt was a soldier in the American Civil War and later fought in armed conflicts with Native Americans on the frontier.
It was Pratt’s belief that the Native American should receive an American education and be absorbed into American society. Pratt gained support for this view when he commanded a group of seventy-two Native American prisoners at St. Augustine, Florida, in 1875. Through education and humane treatment, Pratt believed that even the most “savage” of Native Americans might become educated and law abiding citizens of the United States.
Pratt’s efforts resulted in the founding of the Carlisle Indian Industrial School at Carlisle, Pennsylvania, in 1879. As head of the school, Pratt stressed both academic and industrial education. He believed that if the Native American was to claim his rightful place as an American citizen, he must renounce his tribal way of life, abandon the reservation, and seek education and employment among the “best classes” of Americans.

The collection includes letter-press books, writings, diaries, notes, photographs, and drawings. The papers largely relate to Pratt’s work with and theories on the education of American Indians and his involvement with the Carlisle Indian School. Included is material relating to the controversies surrounding his work and much relating to Indians and Indian life in general. There are a group of Indian photographs and drawings, and papers relating to members of Pratt’s family. Currently, only a portion of these papers are available online.