Rudyard Kipling: The Books I Leave Behind

Selections drawn from a 2007 exhibition focusing on the works of the English author and poet, Rudyard Kipling. 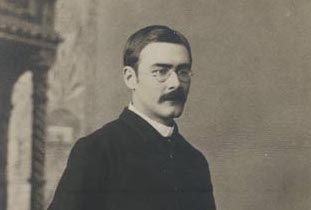 For the last decade of the nineteenth century and at least the first two decades of the twentieth, Rudyard Kipling (1865-1936) was one of the most popular writers in the English language, in both prose and verse. He was among the last British poets to command a mass audience, appealing to readers of all social classes and ages. Although his few novels, except Kim, were only a mixed success, in the medium of the short story Kipling extended the range of English fiction in both subject matter and technique and perhaps did more than any other author in the English language to blur the division between popular and high art.

Rudyard Kipling: The Books I Leave Behind, an exhibition held in 2007, was the first comprehensive show to be presented anywhere in over fifty years. This exhibition tracked the development of his work, from journalistic beginnings in India, through sudden and sustained success in England and the United States, and followed his transformation from the exuberant bard and binder of Empire, to the public poet of the battles and cemeteries of the Great War which claimed his only son, to the dismayed observer of the post-war years who resisted the drive for the independence of India and foretold the growing threat of Hitler. The exhibition gives special attention to the bibliographic intricacies of Kipling’s printed output. His popularity meant that many editions of his work were issued—with revised texts and variant bindings, in special formats, and especially as unauthorized or “pirate” versions.

The books and manuscripts shown here, gathered over the years by keen and discerning collectors, provide a picture of how Kipling’s stories and images traveled around the world in a wide range of formats. Among the featured items are documents from Kipling’s schooldays, manuscripts in Kipling’s hand, and a copy of The Jungle Book with a unique watercolor of Shere Khan. Also on view is sheet music for songs by Kipling, a tea-set and cotton damask cloth emblazoned with one of his most popular poems, “The Absent-Minded Beggar,” and a tin of “Kipling Plug Cut” tobacco from Louisville, Kentucky. Currently, only a portion of the Beinecke Library’s Kipling holdings are available online; the digitized images are drawn largely from the production of the exhibition catalog, Rudyard Kipling: The Books I Leave Behind.

Rudyard Kipling: The Books I Leave Behind (.mp3)
A podcast by collector, guest curator and Kipling scholar David Alan Richards, describing how he built the world’s largest collection of unique Kipling items. (12:01)