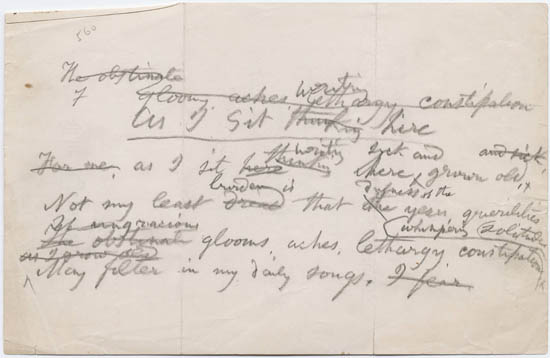 Walter Whitman (1819–1892) the American poet and journalist, is best known for his poetry collection Leaves of Grass, first published in 1855.

The Beinecke Library’s Walt Whitman Collection contains letters, manuscripts, photographs, art, and other material dating from 1842-1949, and features the Whitmania of Yale benefactors Louis Mayer Rabinowitz and Arian Van Sinderen. The Rabinowitz gift features letters to Whitman from Civil War soldiers and former patients, galley proofs for articles and poems, many inscribed and signed by Whitman, and holograph fragments to November Boughs. A group of papers relating to Whitman’s brother George includes journal entries and letters documenting Whitman’s efforts to find his brother during the war. Whitman’s journal entries provide a rough history of his brother’s movements from an undated memo from George to his mother, in which George reveals his captivity, to Whitman’s first journal entry on December 26, 1864 describing the family’s experience after receiving George’s army trunk.

The Whitman collection includes other manuscript drafts and galley proofs, such as a holograph draft for a poem, “Sea-Captains, Young or Old,” and an untitled autobiographical statement, written in 1888, discussing service to the wounded in Maryland and Virginia during the Civil War from 1862 to 1865. The collection features many representations of Whitman by well-known nineteenth century photographers and artists. There are photographs by Thomas Eakins, a bust by sculptor Samuel Murray, and both original engravings and reproductions by Samuel Hollyer, Gustav Kruell, William James Linton, and Stephen Alonzo Schoff. Currently, only a portion of the Walt Whitman Collection is available online.

The Walt Whitman Archive is a comprehensive resource about Whitman’s life and work, made freely available by the Center for Digital Research in the Humanities at the University of Nebraska–Lincoln.