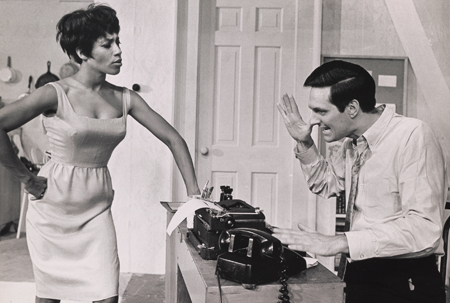 Many of the productions that we now consider highlights in the history of African Americans on the stage—Shuffle Along (1921), The Green Pastures (1930), Porgy and Bess (1935)—were performed by entirely African American casts. This exhibition features productions and performers that attempted to bridge racial divisions through integrated casting. Initially viewed as a novelty, as when Sam Lucas became the first African American man to play the lead in Uncle Tom’s Cabin in 1878, crossing the color line on stage would soon be held up as a triumph in the multi-pronged fight against Jim Crow. By the middle of the 20th century, commentators embraced the appearance of black and white actors onstage together as a symbol of progressive civil rights. Later playwrights, however, most notably August Wilson, questioned the validity of integration as a worthy goal in itself, advocating instead the celebration of African American life on the stage.

This exhibition is divided into two parts. The curved case at the north end of the library’s mezzanine offers a chronological selection of examples of stage integration, beginning with the 1878 Uncle Tom’s Cabin and continuing through Wilson’s 1984 Ma Rainey’s Black Bottom. The south case features three individuals—the actor Paul Robeson, the director Lloyd Richards, and the producer Philip Rose—each with notable involvement in the history of integration onstage.
Much of the material on exhibit hails from the Clippings File of the James Weldon Johnson Memorial Collection, a vast and rich assemblage not only of clippings, but also of theater playbills and other ephemera. The clippings collection was maintained by the Yale Library from the founding of the James Weldon Johnson Collection in 1941 until about 1985, with regular contributions of material from Carl Van Vechten, Grace Nail Johnson, Langston Hughes, Prentiss Taylor, and Ollie Jewel Simms Okala. We are grateful for the historical record this collection provides—one that might otherwise have vanished.