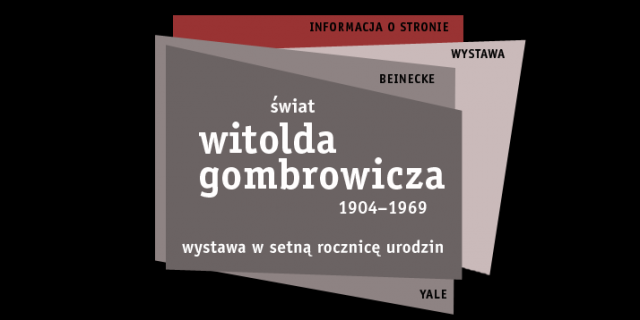 Beinecke Library celebrates the centenary of the Polish writer Witold Gombrowicz (1904-1969) with an exhibition drawn from his papers and library, acquired by Yale in 1998. Gombrowicz, playwright, diarist, and author of several novels, including Ferdydurke which Susan Sontag has called “one of the most important overlooked books of the 20th Century,” was born in Poland on August 4, 1904. During his 24 years of exile in Argentina, he explored themes of identity and alienation in such works as the novel Trans-Atlantyk and the plays “Slub” [Marriage] and “Operetka” [Operetta]. After leaving Argentina in 1963, Gombrowicz settled in the south of France, where he continued his writing, winning the International Prize for Literature in 1967 for his novel Cosmos as well as a nomination for the Nobel Prize. Gombrowicz, who died in July 1969, remains a powerful voice in modern European literature, though he is little known in America. The Yale University Press issued a new translation of his novel, Ferdydurke in 2000. On display are original manuscripts by Gombrowicz, rare editions of his publications, pages of his diaries, and photographs showing the writer throughout his life.