Creating Germany’s National Myth: The Nibelungenlied and its Homerian Context 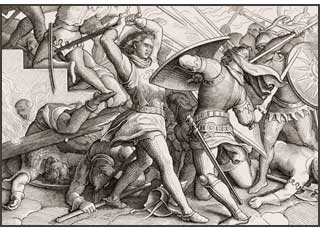 A medieval “best-seller,” the Nibelungenlied soon fell into obscurity. When a manuscript of the epic poem was discovered in 1755, German literary critics hoped it would come to rival Homer’s epics in popularity and esteem. Critical studies and new incarnations of the epic began to appear, from the first fragment, Chriemhild’s Revenge (1757) through Wagner’s Ring cycle and beyond. Against the backdrop of German admiration for ancient poetry, particularly the Iliad and the Odyssey, this exhibition chronicles the creation of a “German National Myth” from the ill-suited cloth of the Nibelungenlied. [ca. 30 items]