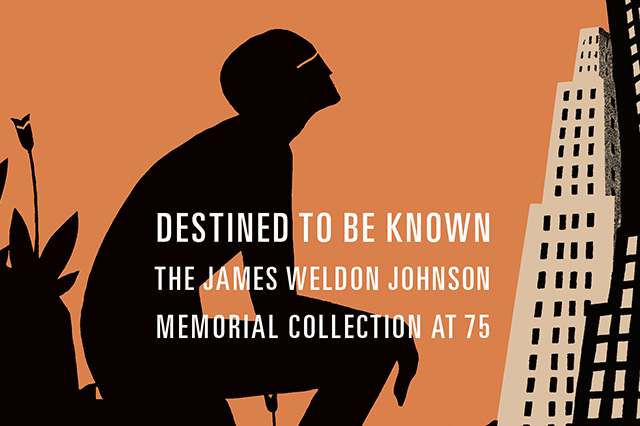 African American literary and artistic achievements are showcased in a new exhibition, “Destined to Be Known: The James Weldon Johnson Memorial Collection at 75,” at the Beinecke Rare Book & Manuscript Library at Yale University. The exhibition runs Sept. 23 – Dec. 10 in the library, 121 Wall St., which is always free and open to the public.

The exhibition marks the anniversary of the James Weldon Johnson (JWJ) Memorial Collection, founded in 1941 by Carl Van Vechten both as a memorial to Johnson, an architect of the Harlem Renaissance, and as a celebration of the broad accomplishments of African American writers and artists over time. Today, the JWJ Collection is a key archive of African American history and culture.

“The JWJ collection is one of the premier collections of its kind anywhere in the world, and one of the most actively consulted of Yale’s extensive collections,” says Nancy Kuhl, curator of poetry in the Yale Collection of American Literature (YCAL) and a co-organizer of the exhibition. “Scholars have used it for more than half a century to document, discover, and disseminate important aspects of national and global culture and to create new scholarship to educate present and future generations. We are especially delighted by how frequently the collection is used for classroom teaching and learning and for research by Yale faculty and students.”

When Johnson was killed in a car accident in 1938, just weeks after his 67th birthday, there was tremendous demand for a memorial to his memory. Though plans were made for a statue in Manhattan, the memorial committee, under the leadership of Johnson’s friend Van Vechten, decided instead to found a collection of African American arts and letters at Yale in his honor.

The JWJ Collection also contains extensive visual material. Van Vechten photographed hundreds of his friends including all the persons mentioned above as well as Alvin Ailey, Marian Anderson, Pearl Bailey, Josephine Baker, Ella Fitzgerald, Billie Holiday, Eartha Kitt, Arthur Mitchell, Paul Robeson, Margaret Walker, and Ethel Waters, among many others. These photographs, together with those collected by Hughes and Wright, comprise an important visual record of artists, writers, actors, musicians, and politicians active in the United States from the 1920s through the 1950s.

Sculpture by Richmond Barthé, Augusta Savage, and Leslie Bolling; drawings by Mary Bell; a portrait head of Ethel Waters by Antonio Salemme, as well as commemorative medals and prints are among the many works of art in the collection. The Randolph Linsly Simpson Collection, acquired in the 1990s, of photographs of and by African Americans contains nearly 3,000 photographs of African Americans and spans the history of photography, from daguerreotypes and cabinet cards to photographic postcards and snapshots.

The collection, like the Beinecke overall, has a robust ongoing acquisitions program. Recent additions include: the archives of educator, suffragette, and anti-lynching activist Ellen Barksdale-Brown; the literary archive of playwright and director Lloyd Richards; a collection of approximately 100 letters by James Baldwin; and the foundation records of African American poetry institution, Cave Canem, and the personal literary archives of its two poet-founders, Toi Derricotte and Cornelius Eady. The collection continues to grow beyond traditional print material with acquisitions in black tourism, beauty culture, and film ephemera.

The exhibition at the Beinecke has two components. One case highlights the life and work of Johnson himself, focusing on his roles as civil rights activist, lyricist, man of letters, poet and writer, and diplomat. A man of letters and of the law, author of solemn lyrics and popular love songs, Johnson led a multi-faceted life and his career was one of constant reinvention. Among his many accomplishments, he was a field secretary and later executive secretary for the National Association for the Advancement of Colored People (NAACP), the first African American executive of the group. Johnson opened NAACP offices throughout the United States and became the nation’s most outspoken critic of the practice of lynching.

Melissa Barton, curator of prose and drama in YCAL and a co-organizer of the exhibition, notes that the show and the JWJ collection embody Johnson’s own oft-quoted words in The Book of American Negro Poetry, “The final measure of the greatness of all peoples is the amount and standard of the literature and art they have produced. The world does not know that a people is great until that people produces great literature and art. No people that has produced great literature and art has ever been looked upon by the world as distinctly inferior.”

“’Destined to Be Known’ provides a window into the JWJ collection,” according to Barton, “with selections we hope serve as invitations to students, scholars, and the public to explore the collection further on-line and through scholarly research in person at the Beinecke. This collection is a resource for all and we trust it will become even better known and more consulted in the future as we look forward to its growth and development over the next 75 years.”

Barton points out that the anniversary and exhibition come at an important time in the nation and on campus. “Johnson and his contemporaries understood that Black lives matter and dedicated their efforts to deepening the recognition of African American arts and culture among their community, throughout the nation, and around the world. The JWJ Collection is a living legacy and resource on matters that remain vital in our time,” she says. “We are particularly delighted this exhibition comes as the Smithsonian’s National Museum of African American History & Culture opens on the Mall in Washington, D.C., bringing with it a brilliant and much-needed national focus on ‘a people’s journey and a nation’s story’ that were at the heart of Johnson’s life work.”

“James Weldon Johnson stands among the nation’s most important civil rights activists and creative forces,” according to Cornell William Brooks ’90 J.D., national president and CEO of the NAACP. “The Beinecke Library’s JWJ Collection is an essential resource to understand the nation, its challenges, progress, and opportunities. I encourage everyone who can to visit the Beinecke in person to see ‘Destined to Be Known’ and encourage all to visit the library’s online resources.”

In conjunction with the exhibition, there are a number of special events, all open to the public, sponsored by the Beinecke and other partners, including:

The Beinecke Library’s celebration of the 75th anniversary of the JWJ Collection will continue through the spring term 2017, with more events, lectures, and performances, and a major exhibition on the Harlem Renaissance.