Doonesbury in a Time of War 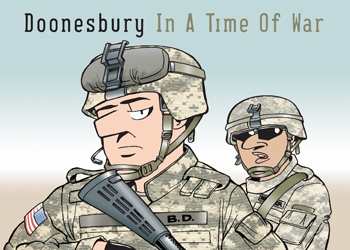 In celebration of the 40th anniversary of G.B. Trudeau’s syndicated comic strip Doonesbury, which began life as “Bull Tales” in the Yale Daily News, the exhibition “Doonesbury in a Time of War” traces the evolution of the quixotic yet representative figure B.D., a character known for his ever-present helmet. Named for the Yale Quarterback Brian Dowling, B.D.’s journey from Walden College football captain to injured Reservist in the Second Gulf War brings to light not only one of Doonesbury’s enduring themes, but the ways in which the subject of war permeates public consciousness. Drawing upon Trudeau’s working notebooks and original artwork for the Daily and Sunday strips, the exhibition highlights key moments in B.D.’s long-running story. As we follow B.D. through episodic and occasionally near-epic moments in theatres as divergent as Vietnam and the current “war on terror,” Trudeau offers commentary not only on the timeless drama of combat and camaraderie, but on the ideological workings of print, advertising, and broadcast media. The strips stand as testimony to the cartoonist’s investigative insight, while Doonesbury’s unparalleled balance of humor and pathos paints American policy and politics with a combination of broad strokes and psychological depth. [ca. 50 items]