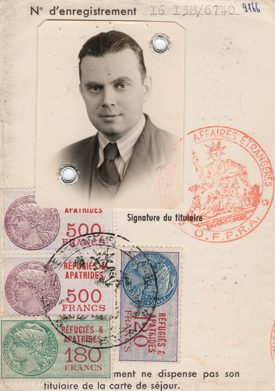 He had his home, posthumous, in the town of New Haven,
In a white building, behind walls
Of translucent marble like turtle shell
—Czesław Miłosz, from “Beinecke Library.” Provinces. New York: Ecco Press, 1991.

The life of Czesław Miłosz (1911-2004), Polish poet, novelist, diplomat, and Nobel Laureate, spanned a time of political upheavals and social turmoil. He lived in Nazi-occupied Warsaw, i n the Paris of exiled literati, and in the United States, perched atop the Berkeley hills with a view o f San Francisco Bay. The Beinecke Rare Book and Manuscript Library celebrates the centennial of Czes 22;aw Miłosz, renowned author of Bells in Winter, Captive Mind and Native Re alm, with an exhibition drawn from the library’s holdings. The manuscripts, documents, and photogr aphs on display reveal lesser-known aspects of Miłosz’s multifaceted relationship with Ameri ca, with his adopted home in California, with fellow émigré authors, and with the English lan guage.