Lee Wulff: “Each fly is a dream we cast out to fool fish” 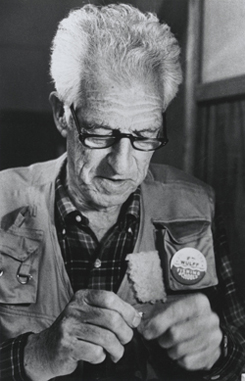 The name Lee Wulff holds a position of particular honor in all of American sport fishing. Catch and Release, a standard fishing practice today, was pioneered by Wulff. Where to put your flies and gear?–in the fishing vest that Wulff designed and sewed himself in 1931. While Lee Wulff may be best known for fly fishing, he captured fish by all means possible. From native brook trout to enormous bluefin tuna, he successfully fished for nearly everything with fins. We may think that Wulff was ahead of his time, but in a very real sense he was exactly of his time.

In his long career, Lee Wulff (1905-1991) balanced broad-ranging interests and talents. Fly fisherman, fly tier, conservationist, poet, scientist, artist, naturalist, pilot, writer, and film-maker cover some, but by no means all of his endeavors. His inquisitive nature and inexhaustible energy propelled him into remote regions of the world, on the ground and in the air. During his tenure operating fishing camps in Canada, he witnessed the depletion of that once abundant species, the Atlantic salmon, due to overfishing, timber harvesting, and the encroachment of civilization. Whether flying in his floatplane to remote areas of Newfoundland, wearing his waders with his fly rod by his side, or leading a party of high-ranking US generals on a much-needed fishing trip before the Normandy Invasion, Lee devoted a substantial portion of his time to salmon fishing and salmon conservation. His legacy is carried forward today by scores of sportsmen and sportswomen, as well as scientists, naturalists, political figures, and academics, all striving to protect Lee Wulff’s beloved Atlantic salmon.