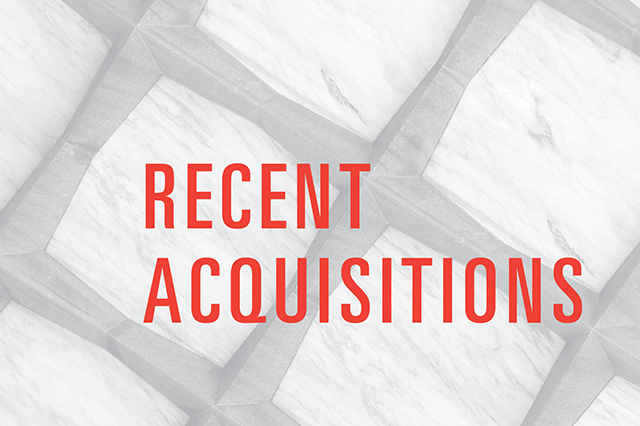 What do a 13th century codex manuscript and a Chipotle cup, or photographs of Abraham Lincoln and a t-shirt from punk music legend Malcolm McLaren, have in common?

All – along with much more – are among scores of items on display in a new exhibition, “Recent Acquisitions,” on view Sept. 29 – Dec. 10 at the Beinecke Rare Book & Manuscript Library, Yale University’s principal center for literary papers, early manuscripts and rare books. The exhibition is on the ground floor and mezzanine of the library, 121 Wall St., which is always free and open to the public.

“Arranged chronologically, the exhibition is more a sampler than an argument, more raw than cooked,” according to George Miles, curator of the Yale Collection of Western Americana and lead organizer for the exhibition. Miles points out that the show also reflects some key strengths of the Beinecke Library, representing areas including early books and manuscripts, modern books and manuscripts, African American history and literature, Western Americana, American drama, prose, and poetry.

“From a remarkable collection of medieval books and manuscripts to a national restaurant company’s effort to ‘cultivate thought’ by turning over the surface of its paper cups and bags to contemporary writers,” he explains, “the items reflect the chronological, geographical, and topical diversity of the Beinecke’s scholarly resources and the many kinds of inquiry they support.”

The exhibition presents a range of material, almost all acquired since the library’s 50th anniversary in 2013, and is part of the celebrations of the Beinecke’s reopening this month following a 16-month comprehensive renovation program to prepare the library for the future with upgraded climate-control system, expanded classroom space, and restoration of an architectural landmark to its original luster.

“Thanks to the support and the generosity of multiple generations of the Beinecke family, of dozens of equally supportive Yale graduates, and of many friends, the library is refreshed and reshaped every year by an extraordinarily dynamic acquisitions program,” says E.C. Schroeder, director of the Beinecke. “New purchases and gifts add depth and breadth to the library’s holdings, allowing us to respond flexibly to current trends in scholarship.”

“These acquisitions help power an equally dynamic programs of research, teaching, fellowships, exhibitions and events for scholars, students, and the general public,” Schroeder says. The library annually welcomes more thousands of scholars who engage with primary material in its reading room, more than 150,000 visitors who come to see the building and exhibitions, and hundreds of Yale classes from across the academic disciplines.

Visitors to the exhibition can view highlights such as 10 pieces from the Ege Collection, medieval manuscripts acquired from the grandchildren of Otto Ege, an Ohio-based scholar, teacher, and bookseller, a controversial figure who proudly claimed the title of Biblioclast, a breaker of books.

The “Recent Acquisitions” show features three distinct kinds of material: the books that Ege broke for sale; the “Family Album,” in which Ege gathered the most distinguished leaf from each broken book; and a set of books that Ege never broke. The books, which reflect many different periods and styles, provide an excellent introduction to the history of Western illumination.

The diversity of the Beinecke’s General Collection is well represented. From Dutch pamphlets exploring the frenzied speculation which accompanied the introduction of tulips to the Netherlands in the early 17th century to the scrapbooks and photo albums of a star of the Public Broadcasting System’s “An American Family”; from the papers of French colonial administrator Michel Begin to a beautifully illustrated natural history of the upper Mississippi River; from John Ruskin’s personal copy of the book he credited with “the entire direction of my life’s energies” to the parodic operas of San Francisco Bay-area gay activist José Julio Sarria, the exhibition reflects the many cultural threads that the Beinecke collects.

The exhibition also reflects the emergence of several new areas of interest. The extraordinary collection of 19th century American photography gathered by Frederick Hill Meserve and his daughter Dorothy Kunhardt (which includes the largest collection of unique photographs of Abraham Lincoln ever assembled) as well as photographs by Alexander Gardner, Jerome Zerbe, and Inge Morath speak to the Beinecke’s recent effort to document photography’s emergence as a medium of art and of record.

The manuscripts of Mustapha Khayati, Isidore Isou, and Henri Chopin are part of the Library’s developing effort to preserve and make available important voices of Post-World War II Europe’s counter culture, including writers and artists whose critique of the liberal state continues to influence continental culture and politics.

Miles notes that this exhibition is on view simultaneously with another special exhibition, “Destined to Be Known: the James Weldon Johnson (JWJ) Collection at 75,” celebrating the anniversary of the Beinecke’s major collection of African American arts and letters. The “Recent Acquisitions” show includes new items in JWJ, such as a selection from an extraordinary group of letters from James Baldwin.

The show also emphasizes the collaborative work of Beinecke curators and the cross-pollination among its collections. The Yale Collection of Western American acquired the family papers of William Sugg, an African American pioneer in the California Gold Rush, and two generations of his descendants, including the family’s photographs, books, and sheet music. The Beinecke has also built its holdings of family photo albums and travel guides that begins to document the opportunities and restrictions that African Americans navigated on a daily basis in mid-20th century America

In keeping with Yale’s commitment to theatrical arts, the Yale Collection of American Literature has long collected the archives of playwrights and theatrical producers. In the last few years, the Library has added to its extensive holdings of Thornton Wilder family papers and acquired materials that enhance the chronological range of its dramatic collections. Three hundred forty-five playbills promoting performances at the Boston Museum document the repertory of one of America’s great 19th century popular theaters.

Major additions to the Living Theater archive greatly expand the Library’s coverage of an important and long-lived experimental theater group, while the acquisition of the papers of Paula Vogel and Donald Margulies will allow students and scholars to explore their careers not only as playwrights but also as mentors to contemporary American dramatists. David Mamet’s letters to Gregory Mosher illuminate their long-standing collaboration that resulted in award-winning productions of Glengarry Glen Ross and Speed-the-Plow.

The Beinecke has also recently acquired numerous letters written by Ezra Pound and the personal papers of Charles Bernstein, a prominent figure in the “language poets” community. Gifts by David Supino of his collection of Henry James and by T. Thomas Tanselle of books by American trade publishers enhance the bibliographic completeness of the collection, while works by Mary Ruefle and Jen Bervin explore the interplay between poetry, systems of notation, and the book as material object.

The relationship between culture and commerce, a topic that can be explored in depth in the Beinecke, is further documented in the acquisition of a set of paper cups and bags from Chipotle Mexican Grill that place the thoughts of contemporary writers before the firm’s customers.

“We hope this selection of recent acquisitions stimulates the imagination of students, faculty, and visitors and that it encourages people to visit our reading room to explore in depth whatever they find interesting,” Miles says.