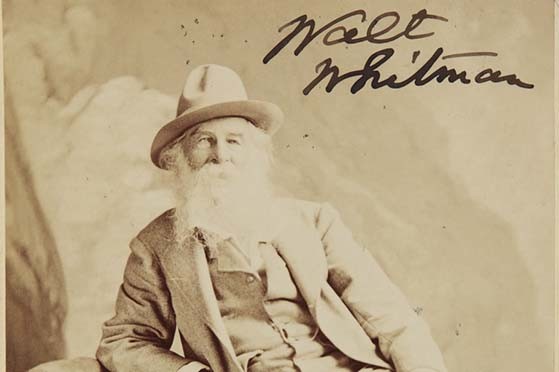 Walt Whitman’s last pair of eyeglasses, two copies of the first edition of Leaves of Grass, and photographs of the iconic American author are among the items on view as the Beinecke Rare Book & Manuscript Library invites visitors to take a look at Whitman on the 200th anniversary of his birth with a pop-up exhibit on the library mezzanine from May 22 to June 7.

Whitman, born on May 31, 1819, is among America’s most influential writers. Harold Bloom, Sterling Professor of the Humanities at Yale, wrote in the introduction to the 2005 sesquicentennial anniversary edition of Leaves of Grass, “If you are American, then Walt Whitman is your imaginative father and mother, even if, like myself, you have never composed a line of verse. You can nominate a fair number of literary works as candidates for the secular Scripture of the United States … None … are as central as the first edition of Leaves of Grass.”

“One of the most important works of American literature, Whitman’s Leaves of Grass is a celebration of the democratic spirit, the emotional and intellectual power of literature and art, and of the poet himself,” according to Nancy Kuhl, curator of poetry in the Yale Collection of American Literature at the Beinecke Library. “In this work, Whitman introduced a new mode of writing and of expression. In the years since it was first published, Leaves of Grass and its author have played a crucial role in shaping American literature and America’s literary imagination.”

The Beinecke Library holds six copies of the extraordinarily rare 1855 first edition. One of the two first editions on view for the Whitman bicentennial pop-up exhibit was the gift of alumnus Owen Franklin Aldis, Yale College Class of 1874. YCAL, home of the library’s Walt Whitman Collection, was founded when Aldis donated his distinguished library of first editions of American fiction, drama, and poetry to Yale. In the century since its founding, YCAL has continued to grow and stands as one of the most important collections of its kind.

The outstanding set of materials in the Whitman Collection relating to the poet’s life and writing is a great example of YCAL’s great strength in printed, manuscript, and visual materials documenting American poetry. The Whitman holdings contain copies of all major editions of Leaves of Grass. In addition to the first edition, the Beinecke Library holds several copies of the 1856 second edition, featuring a quotation from a letter Whitman received from Ralph Waldo Emerson in response to the first edition: “I greet you at the beginning of a great career…”

In addition to printed works, the overall Whitman Collection available to researchers contains letters, manuscripts, photographs, art, and other material dating from 1842-1949, and features the Whitmania of Yale benefactors Aldis; Louis Mayer Rabinowitz; alumnus Adrian Van Sinderen, Yale College Class of 1910; and others. Outstanding manuscripts include Whitman’s early 1850s text “Pictures,” often called a prototype for poems in the 1855 edition of Leaves of Grass because its expansive energy predicts the experimental free verse that characterizes Whitman’s work.

The Collection also includes numerous photographs of the poet, a few of which are on view in the pop-up exhibit. Whitman was quite conscious of his public persona and understood the powerful role that photography, still a new and developing technology, could play in helping him to reach his American audience. From the “rough” depicted in the portrait on the title page of the first edition of Leaves of Grass, to the respectable bard appearing in the edition published five years later, to the “Good Gray Poet” that emerged in the 1860s, Whitman’s photographic image evolved over the course of his career as a writer and public figure.

The Rabinowitz gift features letters to Whitman from Civil War soldiers and former patients, galley proofs for articles and poems (many inscribed and signed by Whitman), and holograph fragments to November Boughs. A group of papers relating to Whitman’s brother George includes journal entries and letters documenting Whitman’s efforts to find his brother during the war. Whitman’s journal entries provide a rough history of his brother’s movements, from an undated memo written by George to his mother, in which George reveals his captivity, to Whitman’s first journal entry on December 26, 1864, in which he describes the family’s experience after receiving George’s army trunk.

The Whitman Collection includes other manuscript drafts and galley proofs, such as a holograph draft for a poem, “Sea-Captains, Young or Old,” and an untitled autobiographical statement, written in 1888, discussing service to the wounded in Maryland and Virginia during the Civil War from 1862 to 1865.

Materials on view in pop-up exhibit

Along with photographs and the first editions of Leaves of Grass, the pop-up exhibit from May 22 to June 7, 2019, includes materials related to his last miscellany of poetry and prose, Good-Bye My Fancy, published in 1891. Visitors can see a holograph manuscript of the work’s preface, corrected and signed by Whitman. The photographs on view include a series of Whitman images from across many years from the Meserve Kunhardt Collection.

Nearby are a pair of the poet’s eyeglasses, the last pair he ever used according to a note, also in the Beinecke Library collection, from Mary O. Davis, Whitman’s housekeeper from 1885 until his death in 1891. Davis had given them to John H. Johnston, a jeweler and friend of Whitman’s. The eyeglasses came to Yale as one of the many items donated by Van Sinderen.