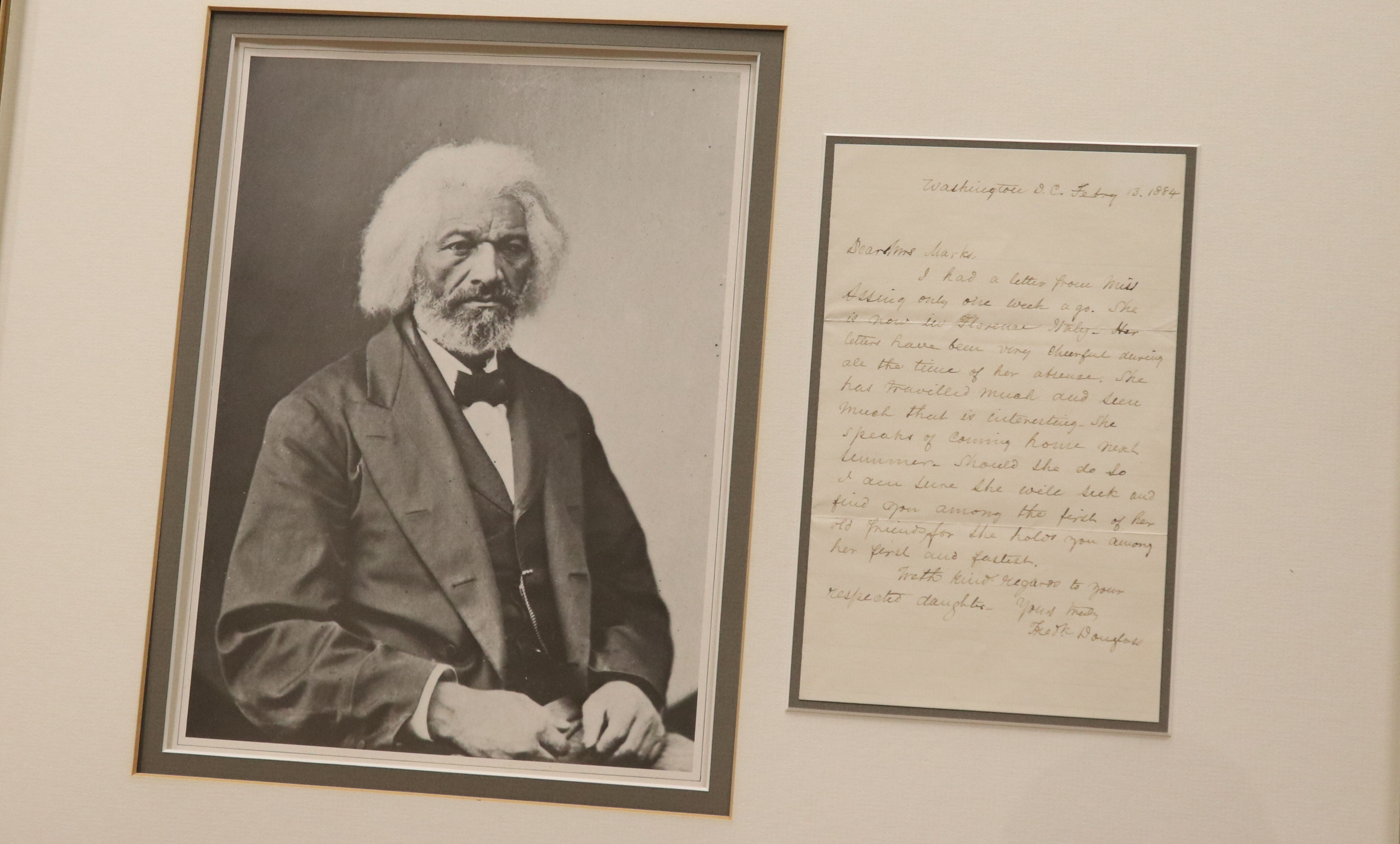 “Dr. Walter Evans has long been known both for his extraordinary collections and as someone devoted to sharing those collections with the public in an effort to bring much-deserved attention to African American artists, writers, and other historical figures,” said Melissa Barton, curator of prose and drama in the Yale Collection of American Literature and a curator of the James Weldon Johnson Memorial Collection. “The Beinecke Library could not be more thrilled that Dr. Evans has entrusted us with the care of his remarkable Frederick Douglass collection.”

Evans reflected: “Since I first began collecting in the mid-1970’s, my goal has been to collect art, books, letters, and manuscripts that told the story of the African American experience. A part of my mission was to share what I had collected with the general public.  The placement of the Douglass and Douglass Family papers from my collection in the Beinecke Library archives is in keeping with our shared mission of having these papers available to students, professors, scholars, and the world.”

“I believe that the past informs the future,” Evans said. “America has not yet successfully addressed the wrongs of its past. Frederick Douglass’s struggles, acts, and words are relevant and essential today. My hope is that scholars, students, and researchers will find this collection a wellspring of profound thought and analysis from which to construct a new path to understanding, resolution, and reconciliation for America.  My wife Linda and I are certain that the Beinecke Library will honor and care for these important materials as I have for the past 35 years.”

The collection’s value for research and scholarship is evident in Frederick Douglass: Prophet of Freedom, Blight’s Pulitzer Prize winning biography of Douglass published in 2018, which he dedicated to Walter and Linda Evans.

Blight, whose first book in 1989 was also about Douglass, wrote in his acknowledgments for Frederick Douglass: Prophet of Freedom, about his first meeting with Evans in 2006 and the impact it had: “I had no intention of writing a full life of Douglass until I went to Savannah, Georgia, to deliver a lecture to local teachers on Douglass’s Narrative.  While there my hosts, the Georgia Historical Society, introduced me to Walter Evans, a collector extraordinaire of African American art, rare books, and manuscripts. Walter’s remarkable collection is the reason I wrote this book.”

Much of Blight’s research was done with the collection at the Evans’s dining room table over subsequent years. Now, Blight says, “It is a dream come true to have the Evans collection come to the Beinecke Library, where it will become available to all researchers in the world as it was to me on Walter and Linda’s dining room table for several years.”

Barton explains that “the Douglass scrapbooks are incredibly complex, layered objects. In many cases the saved items — clippings, ephemera, letters, photographs — are pasted into ledgers that have been previously used, and then there are notes and annotations written by multiple family members. They tell so much about the Douglass family’s engagement with their father’s life and legacy, about their own lives, how and what news media they consumed, what they chose to save, just the practice of keeping a scrapbook in the real heyday of that custom in the United States.”

The Evans Collection of Douglass joins substantial material related to Douglass in the James Weldon Johnson Memorial Collection of African American Arts and Letters and other collections in the Beinecke Library. These include comprehensive holdings of the first printings of Douglass’s published writings, with other significant, rare editions, as well as rare printings of many of his addresses; autograph letters by Douglass; one of the largest groupings of issues of Frederick Douglass’s Newspaper in any library; and numerous portraits of Douglass, the most photographed American of the nineteenth century.

The James Weldon Johnson Memorial Collection (JWJ) has continued to grow as a resource for scholars, faculty, students, and the public since its establishment in the Yale University Library in 1941 with founding gifts by Grace Nail Johnson of her and her husband’s work and of archives and papers from Langston Hughes, Zora Neale Hurston, W. E. B. Du Bois, Paul and Eslanda Goode Robeson, and many others. The vast resources of the JWJ Collection are always among the most consulted on-site in the reading room, used for teaching in the classrooms, and shared through public exhibitions at the library. The JWJ Collection is also among the most represented of all library holdings in the Beinecke Digital Library, always free and open to all, which has been particularly important in a time when access to the physical library is restricted due to public health requirements.

“The Beinecke Library’s partnership with Dr. Evans began in 2013, when Professor David Blight introduced several of us, in my first year at the Beinecke Library,” Barton said. “At that time, Dr. Evans placed his small but incredibly rich collection of James Baldwin letters with the library. This collection includes Baldwin’s powerful, candid letters to his friend the economist Mary Garin-Painter. The Evans collection of Baldwin has quickly become among the library’s most frequently consulted, both in the reading room and in classroom teaching.”

In addition to placing his collection of Frederick Douglass and Douglass Family Papers in the James Weldon Johnson Memorial Collection, Evans has donated his collection of approximately 200 original drawings of editorial cartoons by the brilliant and under-studied Oliver Wendell “Ollie” Harrington. Harrington attended the Yale School of Fine Arts in the 1930s, and his satirical cartoons appeared in many African American newspapers, including The New York Amsterdam News, The Pittsburgh Courier, and The Chicago Defender. Harrington’s cartoons often featured the celebrated everyman “Bootsie” and his experiences with anti-Black racism in the United States. Bootsie is often identified as a counterpart to Langston Hughes’s character Jesse B. Semple or Simple.

The Douglass and Harrington collections, along with Evans’s collection of James Baldwin letters and papers, will be featured in a future exhibition at the Beinecke Library.

“My colleagues and I are honored and humbled to be stewards of the James Weldon Johnson Memorial Collection, including this new addition,” Edwin C. Schroeder, Director of the Beinecke Library, said. “The trust Mrs. Johnson and scores of other authors, artists, activists, collectors, and donors, such as Dr. Evans, have placed in the library over many decades comes with a responsibility to make this cultural heritage accessible both to scholars and to the public and to preserve it for generations to come. The Beinecke Library will make processing and digitizing the Douglass collection top priorities as we move forward this summer and fall with staff being able to work on-site.”

“My commitment as University Librarian is that diversity, equity, and inclusion will be at the heart of all we do,” said Barbara Rockenbach, Stephen F. Gates ‘68 University Librarian. “Special collections development and access are important in this work. I am inspired, in my first days back at Yale, by the addition of the Evans Collection of Frederick Douglass and Douglass Family Papers to the James Weldon Johnson Memorial Collection. I am grateful to Melissa Barton, E. C. Schroeder, and all involved from the Beinecke Library, and to Walter and Linda Evans.”
Rockenbach emphasized, “Frederick Douglass’s words and work are essential resources to know the past, understand the present, and shape the future. It is particularly exciting to consider the impact these materials will have for teaching and learning at Yale and the new scholarship that will result. Making this collection broadly accessible and preserving it for generations to come continue the best of our legacy and exemplify what more we can and must do.”