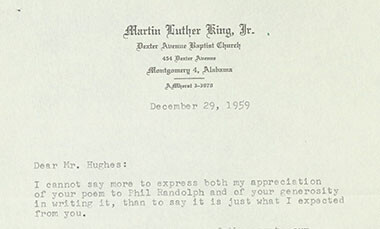 A temporary display on the Beinecke Library mezzanine from January 9 through March 1, 2023

“For years, Martin Luther King Jr. and poet Langston Hughes maintained a friendship,” Jason W. Miller of North Carolina State University noted in Smithsonian Magazine in 2018. The Langston Hughes Papers are a great source about the relationship between Hughes and King and were a key source for Miller’s 2015 book, Origins of the Dream: Hughes’s Poetry and King’s Rhetoric.

This temporary display showcases a selection of materials about one of Hughes and King’s encounters, related to a tribute to labor leader A. Philip Randolph in January 1960. Miller devotes a chapter of his book to King’s request that Hughes write a poem for the event and to Hughes’s positive response and his writing process. (See Project Muse for information about electronic access to the book, as well as information about buying it in print.)

The correspondence between Hughes and King has been digitized and is available online:

END_OF_DOCUMENT_TOKEN_TO_BE_REPLACED

Hughes’s drafts of the poem, which was read by Ossie Davis at the 1960 tribute but was never published, have also been digitized and are available online:

END_OF_DOCUMENT_TOKEN_TO_BE_REPLACED

Miller spoke about Hughes and King at Mondays at Beinecke online on January 18, 2021. His presentation, which includes more detail about Hughes’s poem at King’s request for the tribute to Randolph, is available on the library’s YouTube channel: 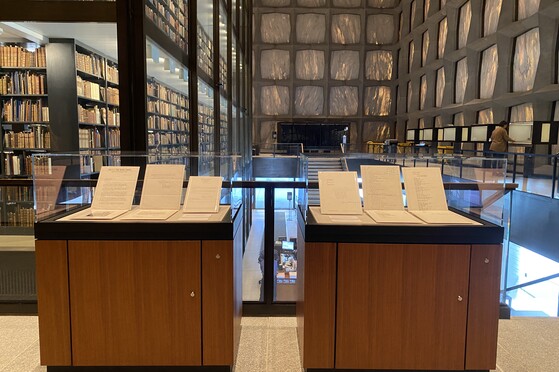