The Ballot and Me by Langston Hughes: An Historical Sequence, 1956 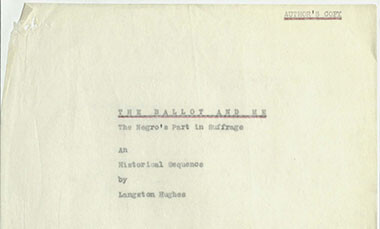 The Langston Hughes Papers are the single most consulted collection in the Beinecke Library’s vast archives. Part of the James Weldon Johnson Memorial Collection of African American Arts and Letters, they were donated by the iconic American writer beginning in 1941 and continuing throughout his life. The archive’s nearly 700 boxes of material are an extraordinary trove of timely and timeless treasures. Hughes’s words and work both speak of his time and speak to our times.

Among the more than 15,000 folders in the Langston Hughes Papers are many writings that relate to democracy and voting, including many well-known, widely published, and oft-recited poems. There are also lesser-known pieces, such as the notes, drafts, and the author’s copy of an occasional piece from the presidential election year of 1956, The Ballot and Me: An Historical Sequence. The variety and frequency of Hughes’s work regarding suffrage underscore his concern for voting rights and commitment to the fight for civil rights throughout his life.

The Ballot and Me, a short play, covers the history of Black enfranchisement in America from the 18th century forward and features the voices of freedom fighters such as Sojourner Truth and Frederick Douglass and the names and stories of every Black federal elected official from Reconstruction to 1956. The historical sequence concludes with all the characters pointing at the audience and cyring in unison: “Vote! …… Vote! ……Vote! ……Vote! ……Vote…VOTE!”

END_OF_DOCUMENT_TOKEN_TO_BE_REPLACED

As his annotations on the drafts and correspondence in the archive note, Hughes wrote this short play in 1956 at the request of his longtime friend, Dorothy Maynor, who he had first met in 1931, for the St. James Presbyterian Church in Harlem, his home neighborhood for most of his adult life. Maynor, a celebrated concert singer and founder of the Harlem School of the Arts, was a leader in the church, which her husband, the Reverend Shelby Rooks (a Lincoln University schoolmate of Hughes), pastored from 1943 to 1976. Hughes had a previous short play, St. James: Sixty Years Young, for the church’s anniversary in 1955.

The Ballot and Me was performed at St. James on Friday, June 29, 1956, as part of a program to promote voter registration. It is included in Volume 6: Gospel Plays, Operas, and Later Dramatic Works, edited by Leslie Catherine Sanders (2004) of the 16-volume Collected Works of Langston Hughes, edited by Arnold Rampersad (2001-2004), but is not known to have been performed or published otherwise.

The Ballot and Me: Correspondence between Langston Hughes & Dorothy Maynor, 1956 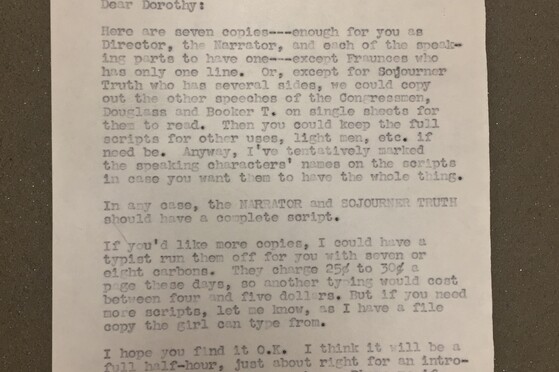