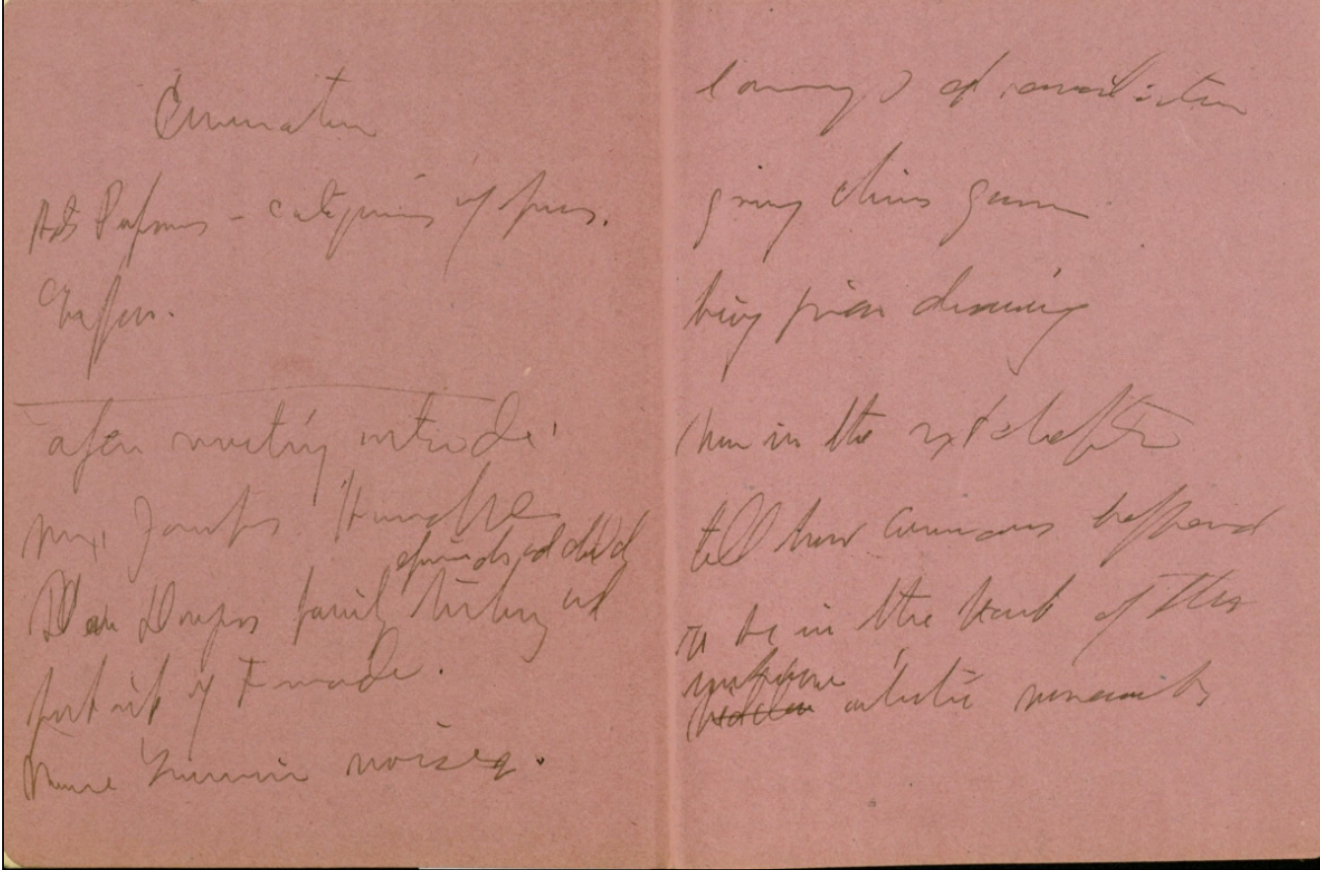 Gertrude Stein, The Autobiography of Alice B. Toklas

READ the published text, available online via Project Gutenberg. Stein wrote The Autobiography of Alice B. Toklas in October and November of 1932. It was the first of Stein’s work to be published by Atlantic Monthly: in 1933, the magazine published the majority of the book, in four installments.

As Janet Malcolm discusses in her essay “Gertrude Stein’s War,” this manuscript is exceptional because “Stein never, or hardly ever, revised: a rare false start to The Autobiography of Alice B. Toklas exists among Stein’s papers”. 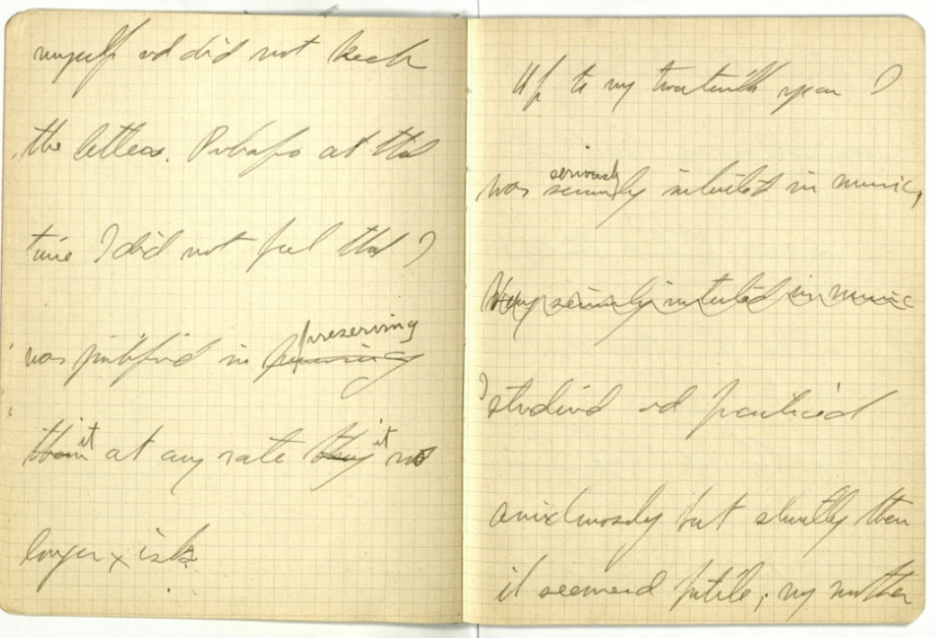 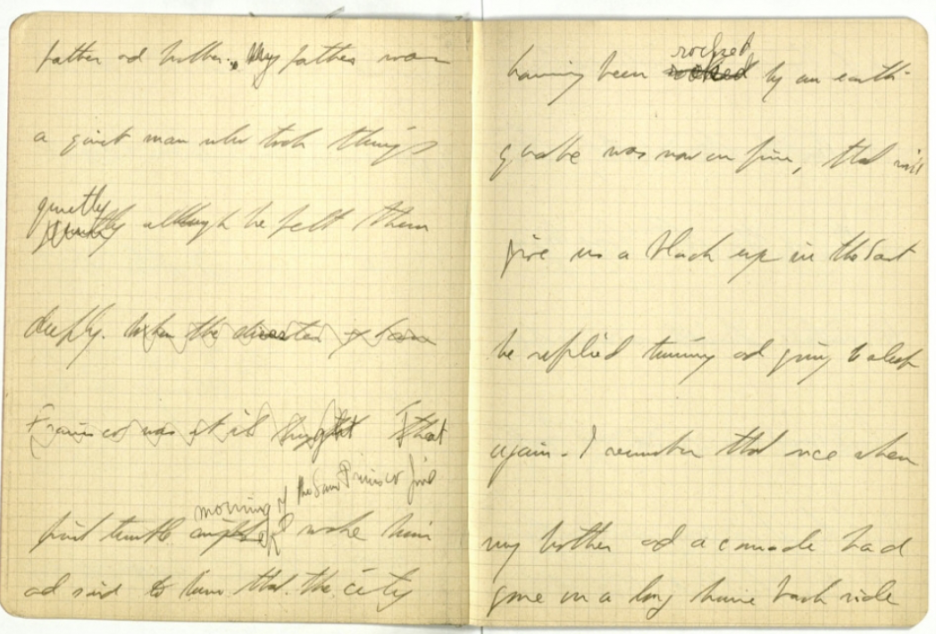 Stein’s edits are frequently small, word-level modifications. In some places (as pictured below), she makes larger changes to the body of the text, even cutting whole pages of writing. 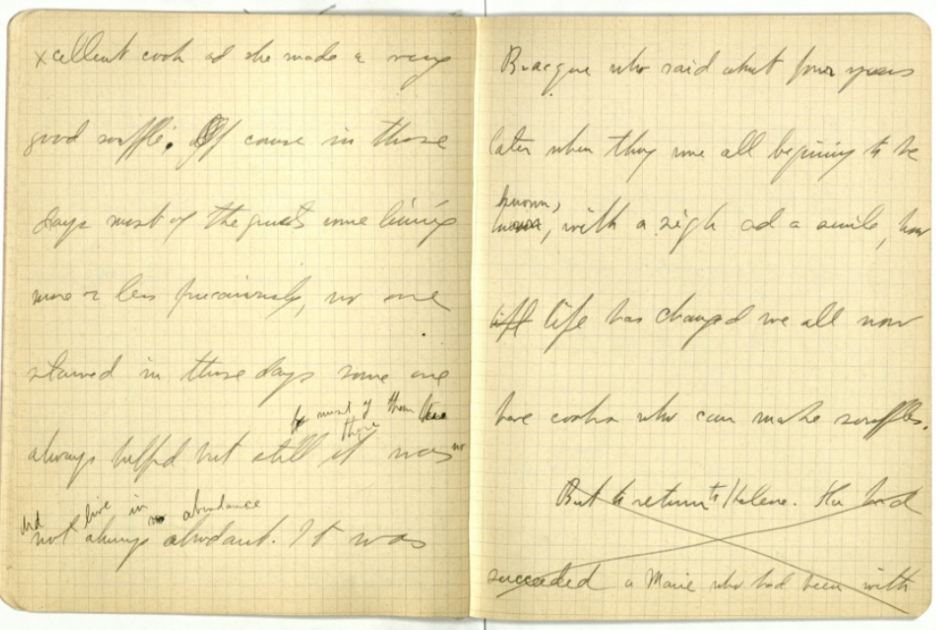 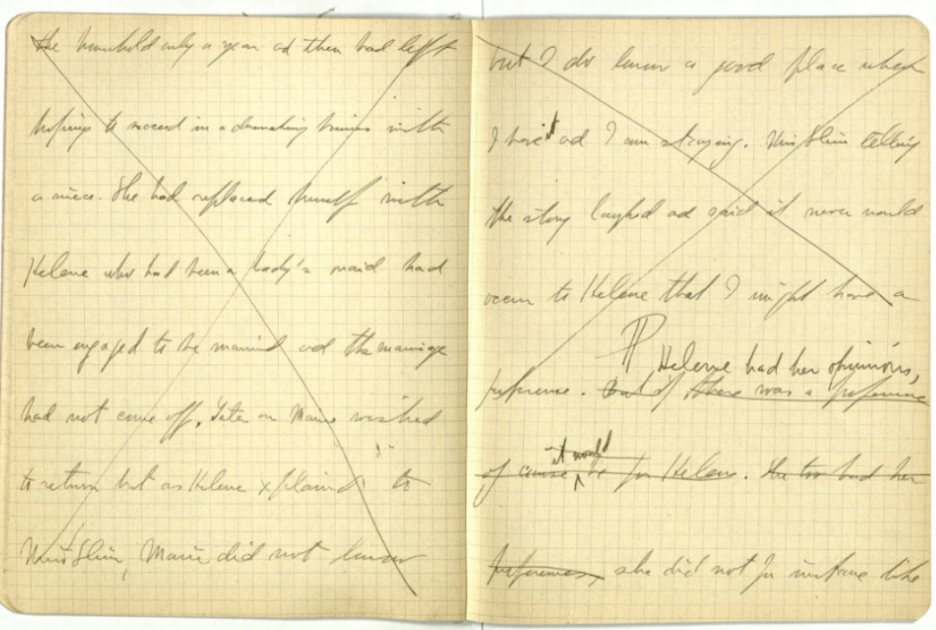 SEE ALSO several copies of the text available in the Beinecke’s Digital Library: 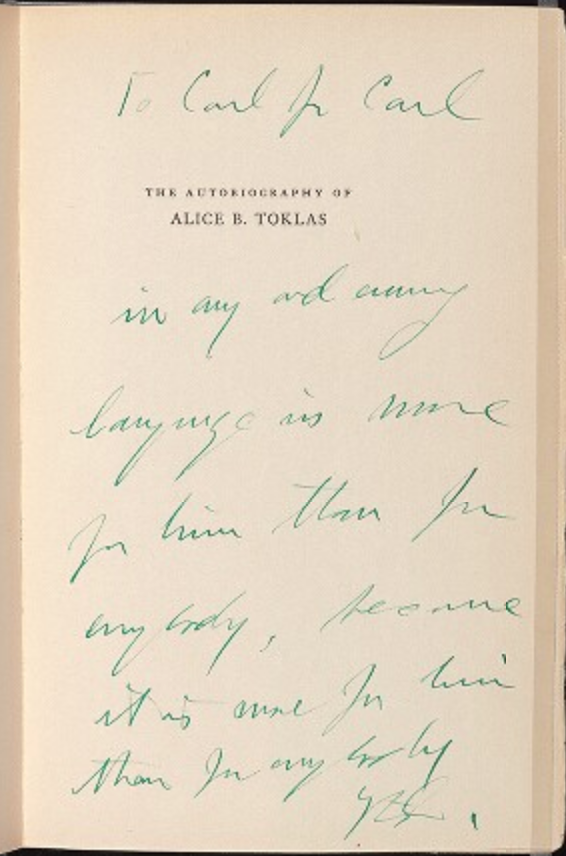 “Miss Gertrude Stein’s memoirs, published last year under the title of Autobiography of Alice B. Toklas, having brought about a certain amount of controversial comment, Transition has opened its pages to several of those she mentions who, like ourselves, find that the book often lacks accuracy. This fact and the regrettable possibility that many less informed readers might accept Miss Stein’s testimony about her contemporaries, make it seem wiser to straighten out these points with which we are familiar before the book has had time to assume the character of historic authenticity…These documents invalidate the claim of the Toklas-Stein memorial that Miss Stein was in any way concerned with the shaping of the epoch she attempts to describe. There is a unanimity of opinion that she had no understanding of what was really happening around her, that the mutation of ideas beneath the surface of the more obvious contacts and clashes of personalities during that period escaped her entirely…The Autobiography of Alice B. Toklas, in its hollow, tinsel bohemianism and egocentric deformations, may very well become one day the symbol of the decadence that hovers over contemporary literature.”

The artists go on to criticize—and essentially fact-check—Stein’s manuscript, citing lines from the text and providing comment. Testimony raises a question central to Autobiography of Alice B. Toklas: what is the relationship between truth, memory, and fiction in this reinterpretation of autobiography?

Janet Malcolm’s archive is housed at Beinecke, and contains many materials related to Two Lives, including research material, correspondence, and other objects. Also read her essay, “Gertrude Stein’s War,” published by the New Yorker in 2003 (referenced previously), which discusses Autobiography in the context of The Alice B. Toklas Cook Book, Stein’s process of writing and revising, and Stein’s life in Vichy France. This dossier, edited by Charles Bernstein, explores Stein’s wartime record.

The Gertrude Stein and Alice B. Toklas Papers are housed at Beinecke. The Papers consists of manuscripts, letters, photographs, printed materials, and art and objects by and about Stein and Toklas, spanning the years 1901-1987. Highlighted objects include: 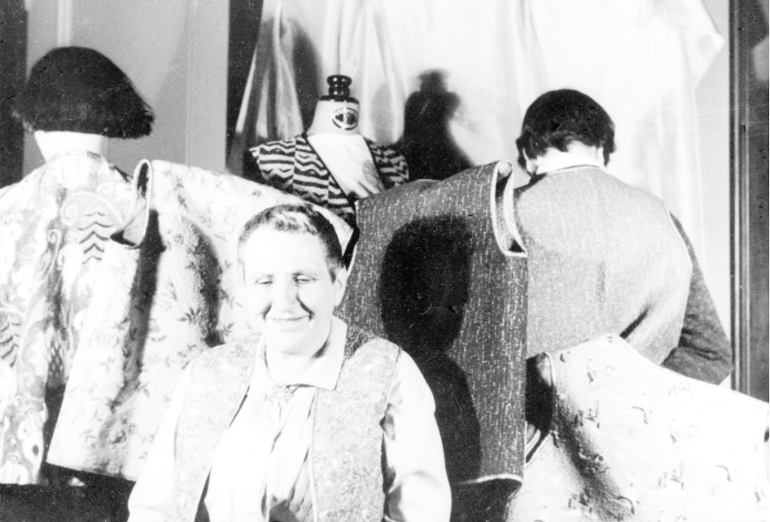 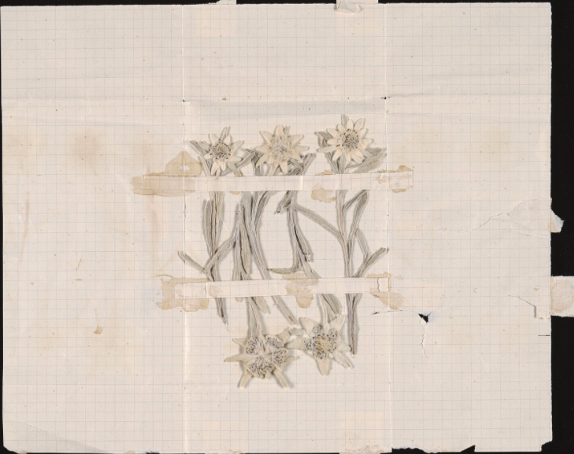 Selected materials from the papers can be Papers can be viewed in the Beinecke Digital Library.

MORE ON GERTRUDE STEIN AND ALICE B. TOKLAS

Gertrude Stein (February 3, 1874 – July 27, 1946) was an American novelist, poet, playwright, and art collector. Born in the Allegheny West neighborhood of Pittsburgh and raised in Oakland, California, Stein moved to Paris in 1903, and made France her home for the remainder of her life. She hosted a Paris salon, where the leading figures of modernism in literature and art, such as Pablo Picasso, Ernest Hemingway, F. Scott Fitzgerald, Sinclair Lewis, Ezra Pound, Sherwood Anderson and Henri Matisse, would meet.

In 1933, Stein published a quasi-memoir of her Paris years, ”The Autobiography of Alice B. Toklas”, written in the voice of Alice B. Toklas, her life partner. The book became a literary bestseller and vaulted Stein from the relative obscurity of the cult-literature scene into the limelight of mainstream attention. Two quotes from her works have become widely known: “Rose is a rose is a rose is a rose,” and “there is no there there”, with the latter often taken to be a reference to her childhood home of Oakland.

Her activities during World War II have been the subject of analysis and commentary. As a Jew living in Nazi-occupied France, Stein may have only been able to sustain her lifestyle as an art collector, and indeed to ensure her physical safety, through the protection of the powerful Vichy government official and Nazi collaborator Bernard Faÿ. After the war ended, Stein expressed admiration for another Nazi collaborator, Vichy leader Marshal Pétain.

Alice Babette Toklas (April 30, 1877 – March 7, 1967) was an American-born member of the Parisian avant-garde of the early 20th century, and the life partner of American writer Gertrude Stein.