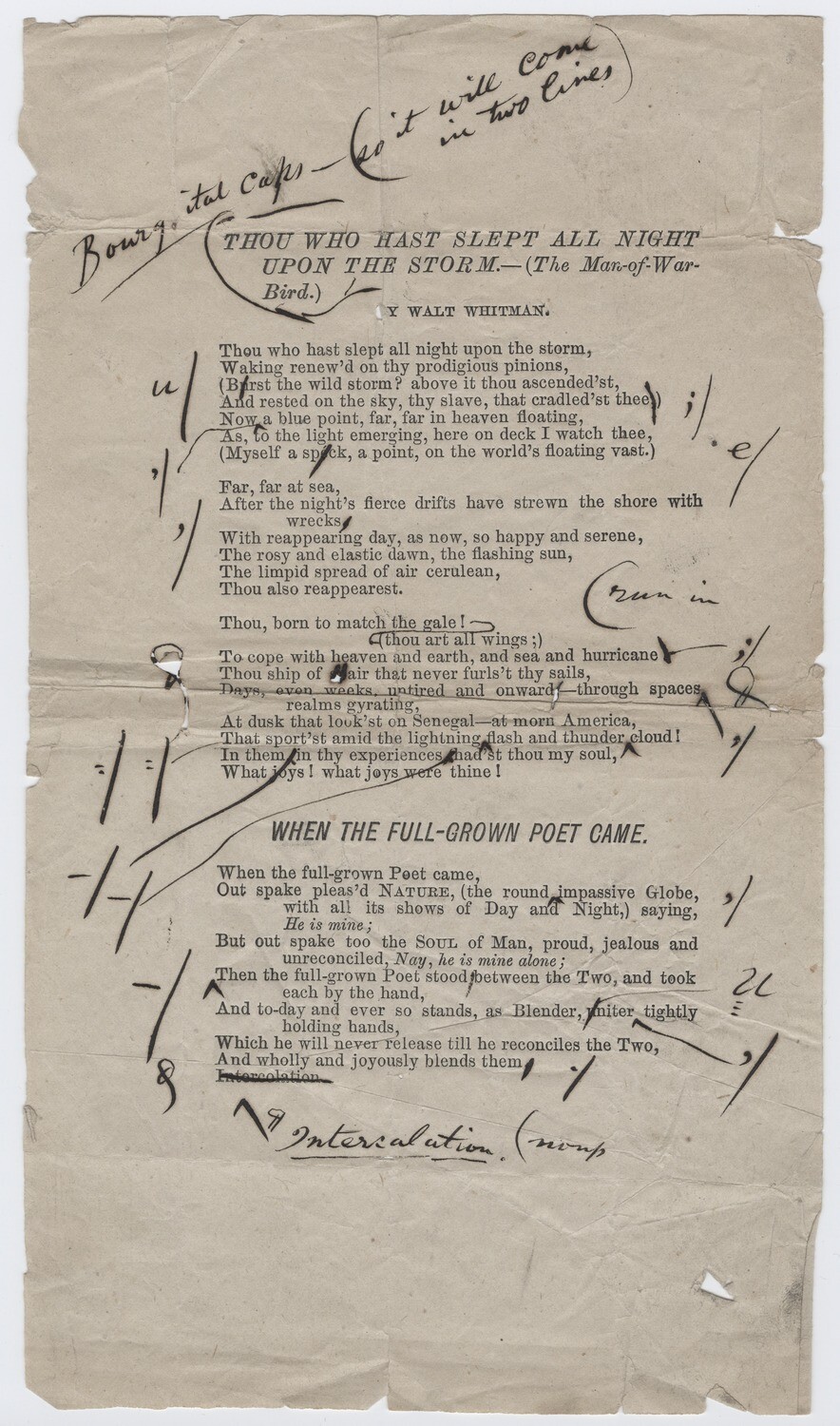 Literary archives include all kinds of writings – from loose notes and notebooks to edited typescripts to nearly complete works written by an author for her typist. These documents allow us to see something of a writer’s thought processes, writing habits. and imaginative flights; they also provide an opportunity to track a piece of writing from its very beginning as an idea in a writer’s mind through to publication or performance

The following includes examples of types of documents commonly found in literary archives; where possible, links to final or published versions of the texts have been added (note: you may need to be signed in to the Yale Library VPN for access). You’ll also find below a few “case studies” showing a text’s development through draft stages.

Writers often begin a new work by making notes – on scraps of paper or in notebooks of every size and shape. Just like they do in the movies, writers in real life sometimes make notes on sraps of paper at hand (like the backs of envelopes –as in this note book where poet Walt Whitman has pasted in envelope paper to serve as additional pages).

In literary archives notes might be part of a complete record of writer’s drafting process or they might be hard to decipher or identify as related to a particular work; sometimes they are the cornerstone of a work, sometimes they capture a passing idea or thought.

Notebook draft of “Nothing Endures by Countee Cullen with word choice changes. The full text of the poem as it was first published by Harper’s in 1928, is online here: “Nothing Endures”

Langston Hughes draft notes for “One Way Ticket”(see full text). The poem was published in a book illustrated by Jacob Lawrence

IN ADDITION to making preliminary notes for writings, many writers’ notes and notebooks include other kinds of information about their creative practice and their writing lives:

Eugene O’Neill, notes concerning staging of The Iceman Cometh & sketches of set for A Moon for the Misbegotten

Rachel Carson’s typed notes to be referenced while delivering a public address on the occasion of accepting an award: notes for a speech upon receiving the AAUW Achievement Award

In literary archives we sometimes find that a writer’s first draft of a work may be written and revised by hand on loose sheets or in note books. Libraries sometimes use the terms “holograph” or “autograph manuscript” to describe a document written out by the author (as opposed to something dictated, written by a secretary, or otherwise authored by the writer but appearing in the handwriting of another person).

Handwritten drafts may give scholars access to original or early versions of a text later revised and changed; they may also allow us to see  how changes have been made in the form of crossed out text, insertions, rearrangements, and other forms of revision and rewriting.

Handwritten draft of the play “Our Town” by Thornton Wilder including notes in Wilder’s hand in different colors, likely added some time after the draft was written. View the full text of Our Town to compare this draft with the published version: Our Town by Thornton Wilder.

Handwritten and corrected pages including draft chapter list of The Station: Athos, Treasures and Men by Robert Byron. The full text is available via Project Gutenberg.

Handwritten manuscript pages with redactions and later addtions by the author of Autobiography of an Ex-Colored Man by James Weldon Johnson.  The full text is available via Hathi Trust.

Mary Rose by J. M. Barrie with an author’s note identifying the text as a “left hander” (written with his left hand after his right hand “gave in”). The full text is available as an electronic resource on Orbis.

“A Young Man Comes to a Big City” by Czeslaw Milosz, with the author’s marginal doodles

SOMETIMES only fragments of a draft or manuscript survive or pages have been separated as in the case with this draft of the final paragraphs of Henry David Thoreau’s Walden. These famous final lines can be found online here: Walden (final paragraphs: “Every one has heard the story which has gone the rounds of New England, of a strong and beautiful bug which came out of the dry leaf of an old table of apple-tree wood, which had stood in a farmer’s kitchen for sixty years, first in Connecticut, and afterward in Massachusetts…”).

OTHER KINDS OF HANDWRITTEN DRAFTS

A writer may make a new, handwritten copy of the final draft of a work to give to a typist. This kind of draft is sometimes called a “setting copy” (this is also the term used to describe the version of a text from which a compositor worked to set type for printing in a letterpress print shop). This copy of Zora Neale Hurston’s novel Their Eyes Were Watching God  may have been prepared for a typist, though it includes an important omission and reinsertion–a version of the famous first lines of the novel are struck through at the top of the first page; they appear instead on the back of that page. You can compare the manuscript with the published version of the novel’s first paragraphs online here: Excerpt from Thier Eyes Were Watching God.

A “fair copy” is another term for a neatly handwritten version of an already corrected text; this term is sometimes used to describe text documents prepared for potential publishers or for presentation, as is the case with this handwritten copy of The Black Christ that poet County Cullen wrote out as a gift for and inscribed to his friend Clive Cottingham. Cullen’s book, The Black Christ with illustrations by Charles Cullen, is online through the University of Missouri Library.

Poet and lyracist James Weldon Johnson wrote a fair copy of his song “Lift Every Voice and Sing” in a notebook, here with the title “National Hymn” and a note: “Written for Celebration of Lincoln’s Birthday, Jax. Fla, 1900”. The full text is available online via the Poetry Foundation.

The Beinecke’s collection includes examples of handwritten manuscripts for which the author is unknown and the text has never been published. One interesting example is this draft manuscript: Savannah, or, the form of a servant, 1875-1876. Savannah is a novel about a young woman from New York who learns of her African American ancestry while travelling through Florida, Tennessee, and other parts of the southern United States in the mid to late nineteenth century. Writers who draft long hand may eventually type later drafts for circulation to editors, publishers, and other readers. Typed drafts are referred to as “typescripts” whether typed on a manual or electric typewriter; in some cases a draft printed from a computer may also be called a “typescript.” Handwritten changes on a typescript may be called “annotations” or “corrections” and they may or may not be additions by the author. Library descriptions may or may not include information about the identities of annotators.

Throughout the 19th and 20th centuries, carbon paper–a kind of inked paper that made it possible to create several exact copies of a document at the same time–was in common use, especially to produce typewritten copies of texts. Unlike a manuscript or some typescripts, a document described as a “carbon copy” is not in itself unique.

Typescript essay [“To this land whenre the clouds fall”] with annotations and corrections by Jeam Toomer  (unpublished?)

Carbon typescript of The Iliad Book 1, translated by Robert Fitzgerald, with annotations by Dudley Fitts. You can read book 1 of Fitzgerald’s translation of The Iliad online on Google Books.

When a text is being prepared for publication, “proofs” may be printed before the text for printing has been finalized. The term “proofs” may refer to documents prepared for author’s, copyeditors, and proofreaders. Proofs can be described in various ways that may refer to the way their were produced (“galley proofs” refer to print shop technology used to make them) or their function (“final proofs” refer to the next-to-last stage of the text, the last opportunity to make minor changes; “proof copies” may be prepared for advanced reading by book reviewers and other members of the media to enable the timely publication of reviews and notices).

Over time the language of proof copies of texts has become muddy and terms are sometimes used indiscriminately; in other words, the term “galleys” was used well past the age or the letterpress and so cannot be trusted as a term describing a document from a particular era. Libraries may use the language a writer used to describe proof documents in an archive or follow an institutional standard. Nevertheless, any document described as a “proof” can be understood to be a late draft of a text nearing its publication. Marks on proofs may be changes made by the author of the given text or they may be changes and corrections suggested by a copyeditor or proofreader.

When reading and reviewing proofs, it can be helpful to familiarize oneself with standard marks used in proofreading documents: Proofreaders’ Marks, Chicago Manual of Style.

Modern Painters Volume 4 “Of Mountain Beauty (including captioning of illustrations and figures) By John Ruskin.  The full text of Modern Painters is available via Hathi Trust. Literary archives sometimes allow us to see what a writer did not include in a publication, from the individual words and phrases crossed out in a manuscript to the poems or chapters that were left out of the final book.

A folder of unidentified draft fragments in the Jean Toomer Papers.

A folder of unidentified fragments in the Mina Loy Papers.